My fellow visitors, I'm astonished. I had a look at the statistics of the last two weeks and was really impressed by the fact that I have around 35-40 visitors on this page every day. Wow.
I can only say thank you for liking my little Napoleonic figure world.

Or in other words: I salute you! 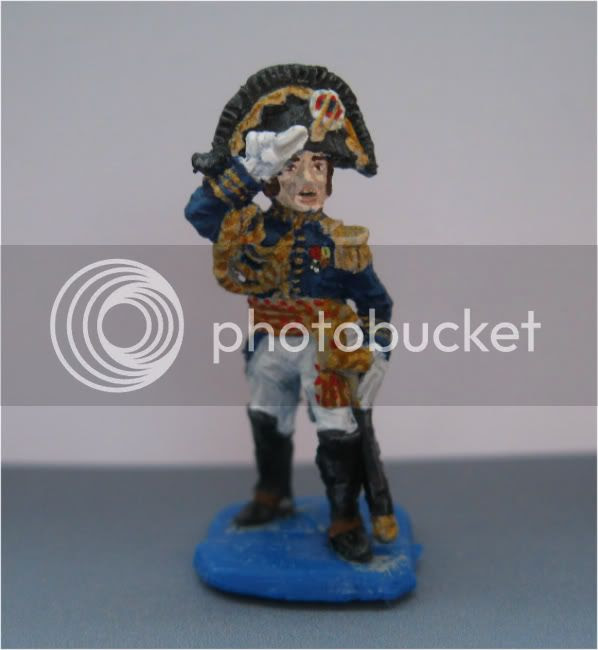 I just quickly finished one of my Strelets French staff set generals for this event.

Apart from that, I've finished a little (or big - it just depends) surprise for the Italian visitors which seemingly reach 100 new visitors in the next few days. ;-)

I just experimented a lot with face detail painting in the last days. I hope that you'll like it - please leave me some comments what you think about it. The way I have painted this particular face, is as well quick as it shows a good result. The basic coat is a Rayher flesh acrylic, then the face lines around nose, chin, mouth etc. are shadowed with GW OgrynFlesh washing. Then a small line of GW ElfFlesh on cheeks and chin and finally a highlight with a 1:1 mixture or Rayher white and flesh - done.

So what's next? To be honest: I have no clue. I still have all these Strelets French staff members to do, but after looking into 'Soldiers and uniforms of Napoleonic Wars' (Hourtoulle/Girbal/Courcelle), I decided to paint some examples of the Naples guard grenadiers in early uniforms - especially because the flag group from the Strelets staff set corresponds to that.

At least, I'm still painting and having fun with it - which is the most important thing, isn't it?
Posted by Zed1 at 7:31 AM 5 comments:

I sat in front of my figures this morning and just thought 'oh my god'. It's more than fifty things laying just before my eyes and it somehow feels as if I wouldn't ever finish that. Well - we'll see.

I just finished at least two little setups of figures for my ongoing list of pre-Bardin French uniforms on Bennos' forum (http://bennosfiguresforum.com/viewtopic.php?f=11&t=7969). This time it's some soldiers from the Valais regiment (Swiss) and the grand duchy of Frankfurt (another Confederation of the Rhine state): 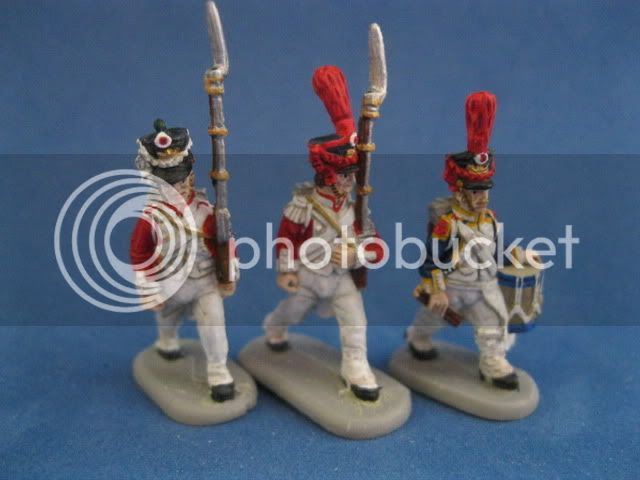 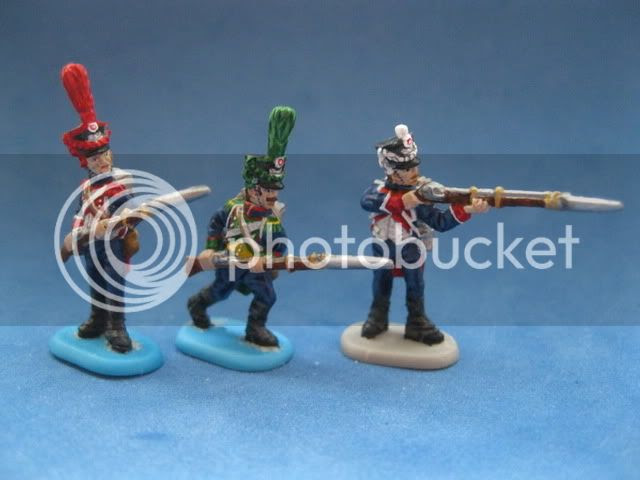 Yes, pictures are not the best again. Plus I should stop to do macro photos. And I must confess that although I wanted to go on with some other things, I spent a little bit lesser time especially on the Frankfurters than I should have.

Whatever. Want to have a closer look at what's going on in my little workshop of horrors?
Here you are! 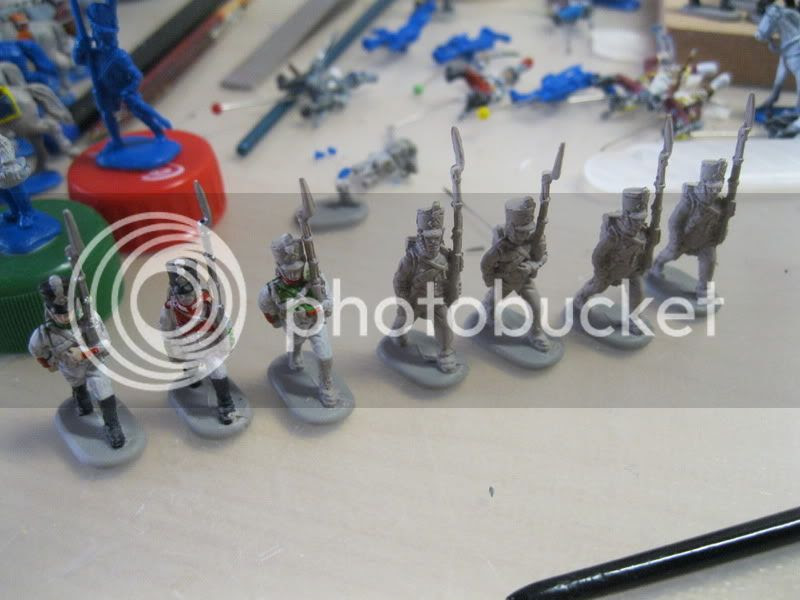 And here is the rest of the Strelets French staff set, all in different stages of painting. 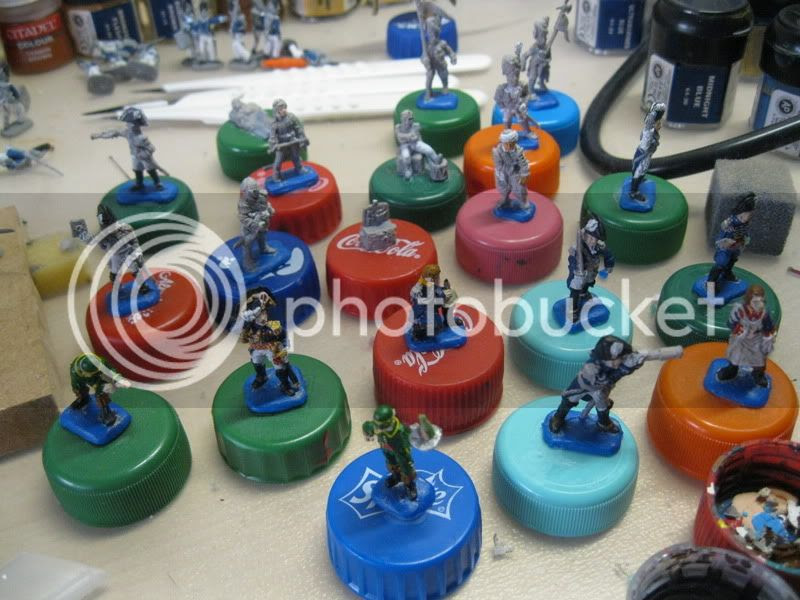 Oh - and that's my workbench in total. With all the unfinished business on it. 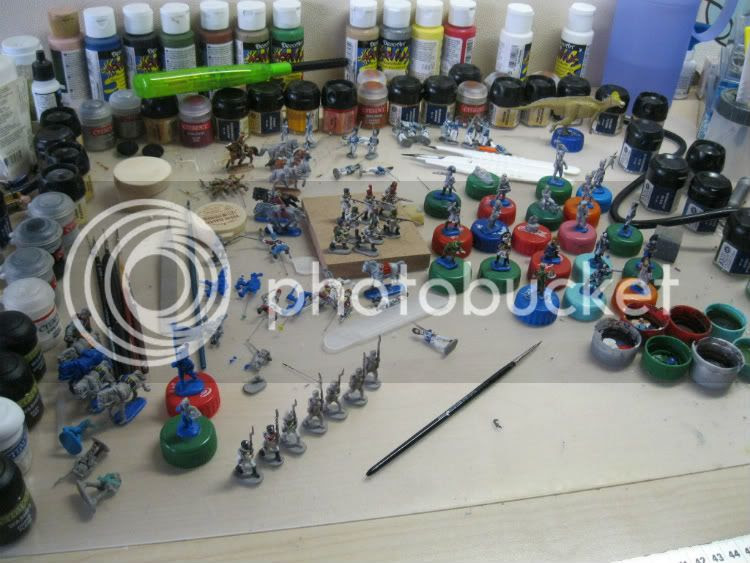 At least I can say that I won't run out of objects in the near future. Keep the good work going, folks!
Posted by Zed1 at 2:21 AM 2 comments:

And the next full 100! I'm really going 'wow' about the amount of unique visitors I have on my blog.
So France is next. Welcome and thanks for coming here - I hope you like what you see.

Again, I have had a longer thought about what to paint for the French visitors. You know, the lists of plastic figure producers are full of French units for each and every period of the Napoleonic era. I thought about French marshals, even Napoleon himself - and then threw away the thought. Too obvious, isn't it?
We have seen flag-waving blue line regiments over and over again. And I really don't intend to come around the corner with the Old Guard again.

Well - I decided to go for something small and different. Something rarely seen. And here they are, fellow Frenchmen from the mountains: 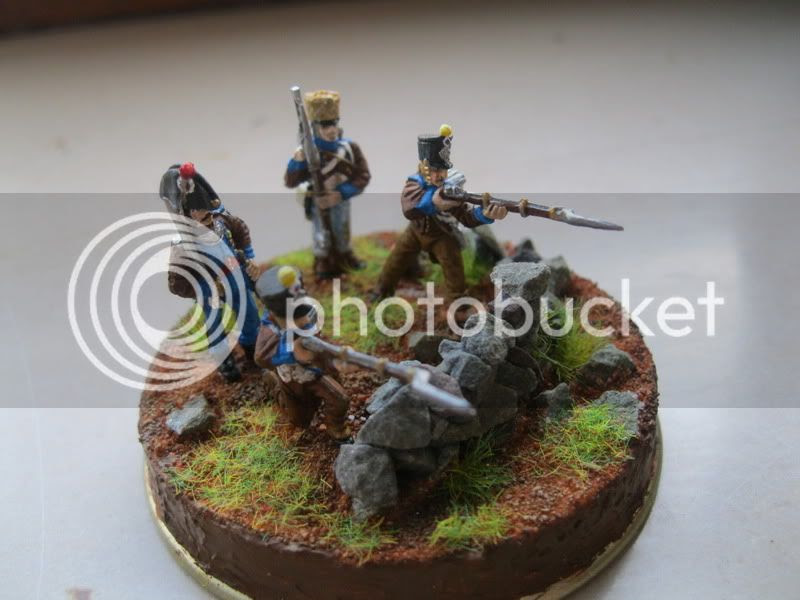 French chasseurs des montagnes! Men in brown and blue - a group of fusiliers, to be exact. I first found them in a book from Hourtoulle, Girbal and Courcelle. The chasseurs des montagnes are an interesting 'unit' - you find many different outfits on the web and in different sourcebooks. In fact, they were raised in different departments and from the start, their equipment was not as homogeneous as for example within the standard line regiments. So their appearance was sometimes a bit mixed, which was the reason why I've decided to honour that by painting every soldier a little bit different. These soldiers were only engaged in the Peninsula campaign and mainly served in what is called 'the small war' - a role in which they were really successful.

Here are some more pictures: 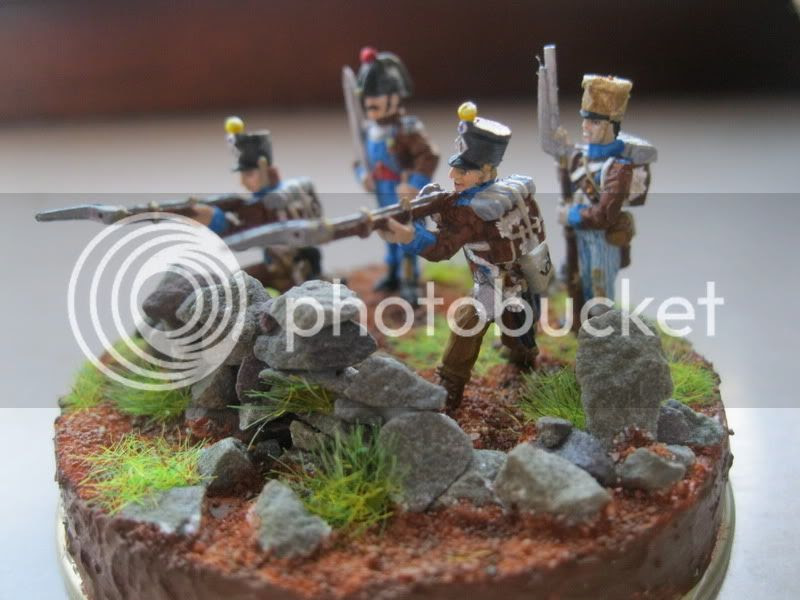 I tried to give the uniforms, especially the trousers, a dusty and shabby look. Again, the pictures don't show that really good... 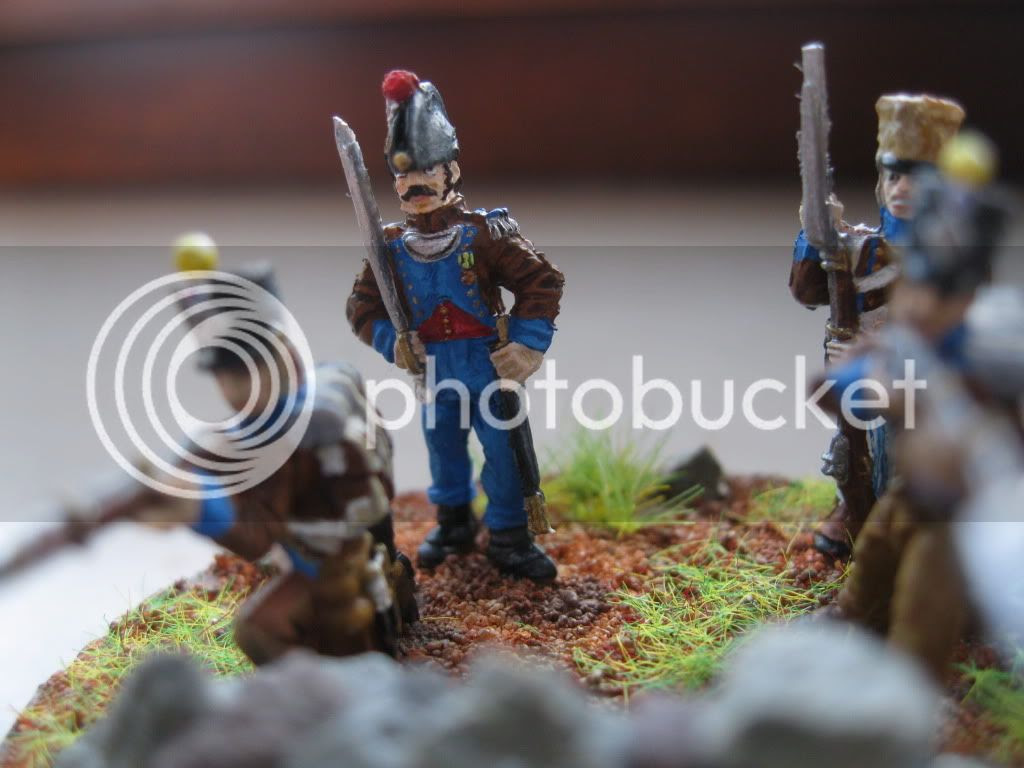 The officer is a conversion - especially for Jen and Ben! I just cut off them walking legs (the original officer figure looks like this: http://i1106.photobucket.com/albums/h361/Zedalist/Cleve2.jpg) and put the body onto some legs I took from a fusilier. The operation wasn't easy because of the jacket laps and the scabbard, but the result looks nice. 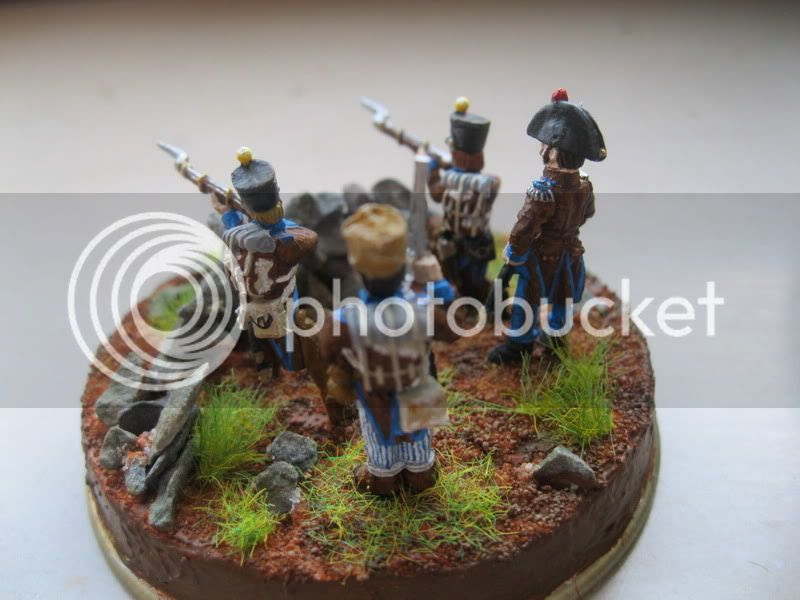 I hope you like the result. In fact I really do.

Again, a positive side effect is having something more for my long-term pre-1812 uniform project.
The next things which I have already on my desk will be mini-groups of the Valais regiment and the regiment of the grand duchy of Frankfurt.
Posted by Zed1 at 4:16 PM No comments: