(Attention: loooong read and many, many pictures!)

The 'Kingdom of Westphalia', which existed between 1807 and 1813, was an artificial construct, a kingdom-by-design. It was created by Napoleon himself after the defeat of Prussia and his brother Jerome was made its' king. The kingdom consisted mainly of former Western Prussian territories and did not cover much of the areas that the Germans themselves considered as 'Westfalen'.

During the Napoleonic wars, around 40.000 Westphalian troops fought for Napoleon, many of them in Spain. Their losses were extremely high, only few of these men returned home.

The armies of the Kingdom of Westphalia were, as was the complete kingdom itself, designed by French architects. But as it was handled autonomically (in order to give the inhabitants a 'Westphalian identity'), the army for example had a complete own uniform and flag design - they didn't look like one of the auxiliary units under French flags.

And this is were my interest started: uniforms.
A year ago, I got some of Franznap's Neapolitan Guard velites. Splendid figures, as always. But as I had seen uniform sources of Westphalian units, I decided to make some little modifications and paint them as Westphalian guard grenadiers. Then, at Heiden, I stumbled accross the French infantry produced by Schilling - I bought one in order to see if it would fit to reproduce some Westphalian line infantry. And then, the whole thing went berzerk. Within a few weeks, I had bought nearly a hundred metal figures - infantry, officers, generals, an artillery gun with crew. All from Schilling or ART miniaturen.

My aim: paint and create a diorama and have it ready until the ISSC2014  in Heiden. Never before had I painted an 'army' of that size, nor did I make any display larger then 10*15cm.

In the beginning, I had to do much research. After I had all the examples that fitted to the figures I had bought, I now had to make all necessary modifications. That meant a lot of greenstuff work, making epaulettes, cords, batches, etc. Here are a few examples for that: 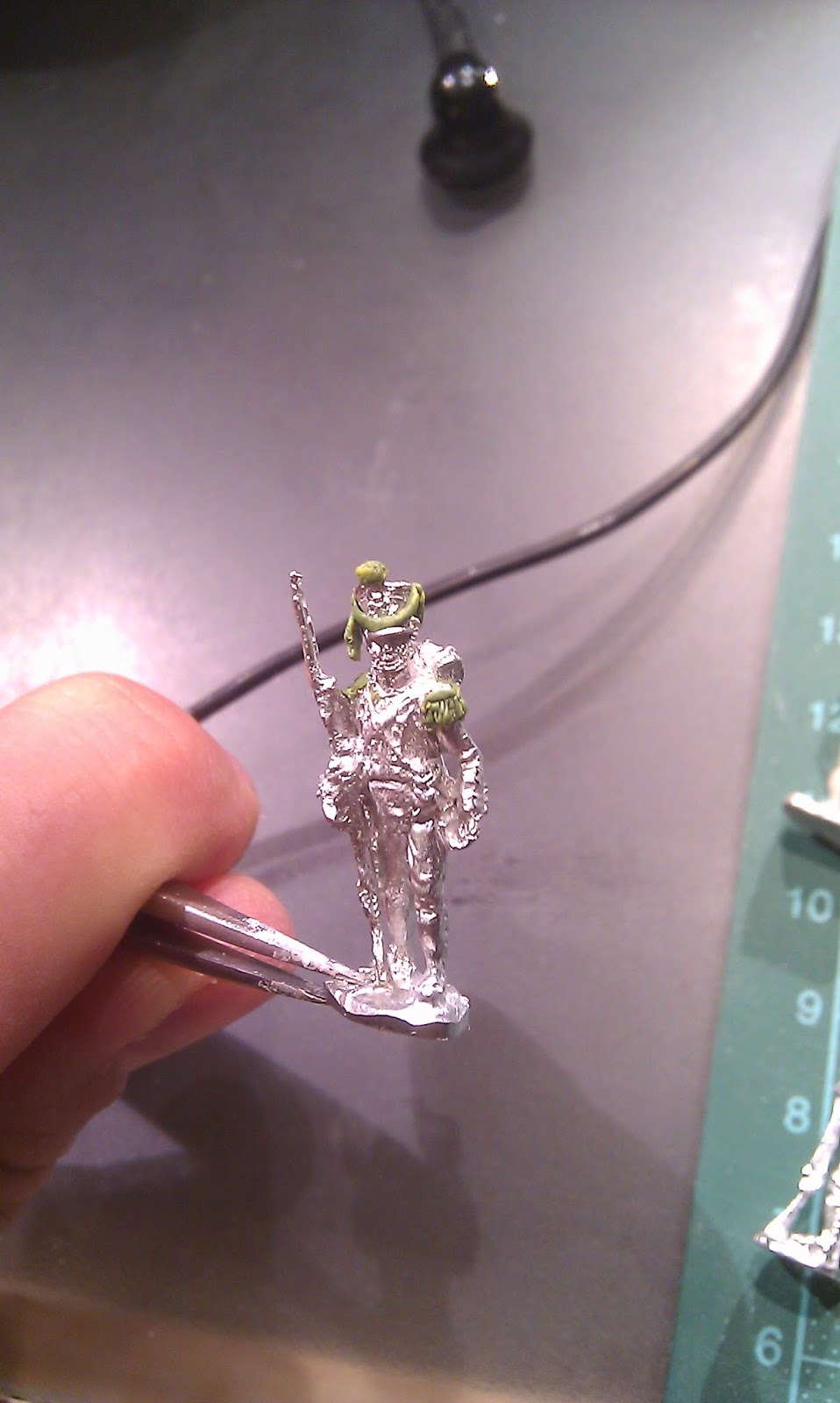 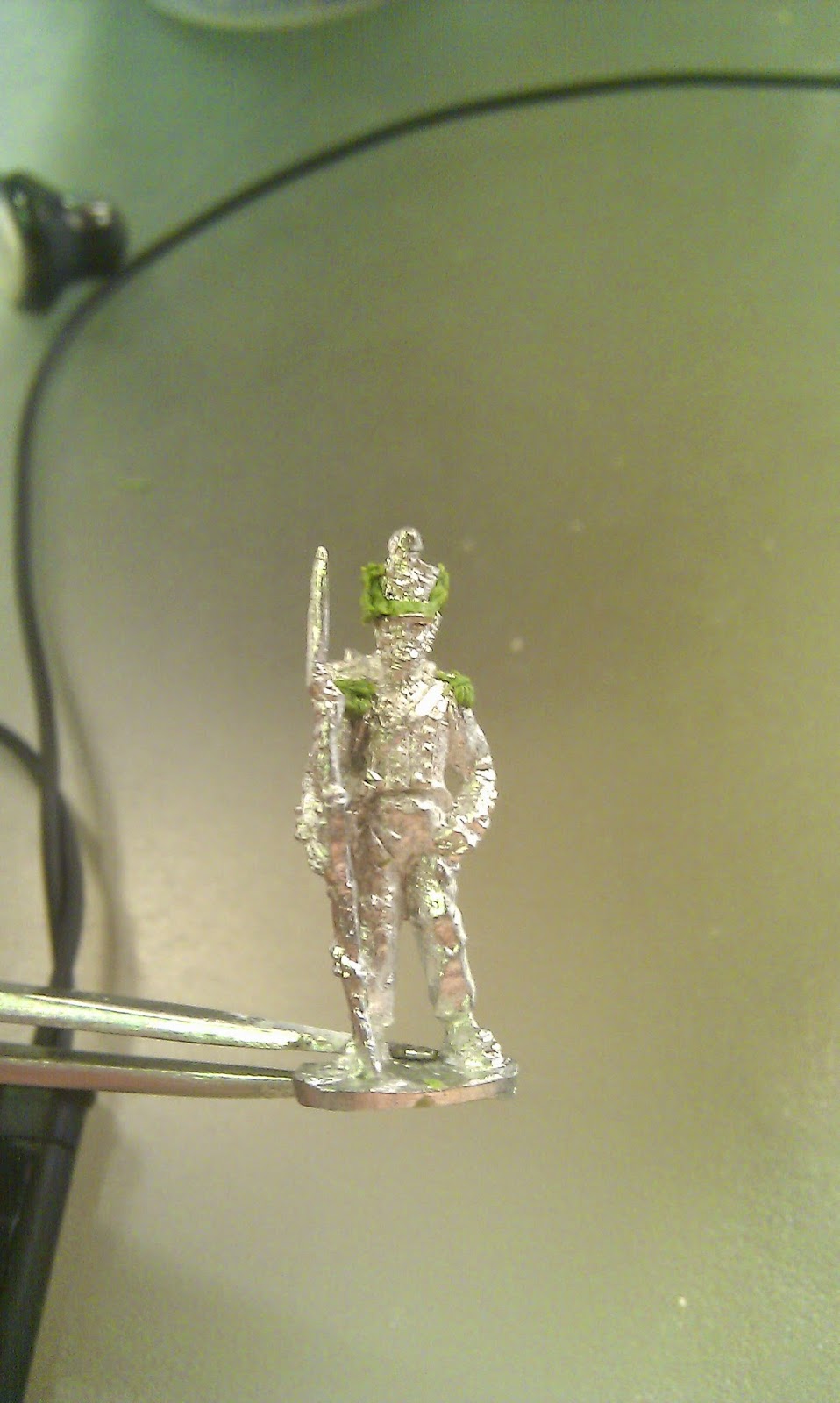 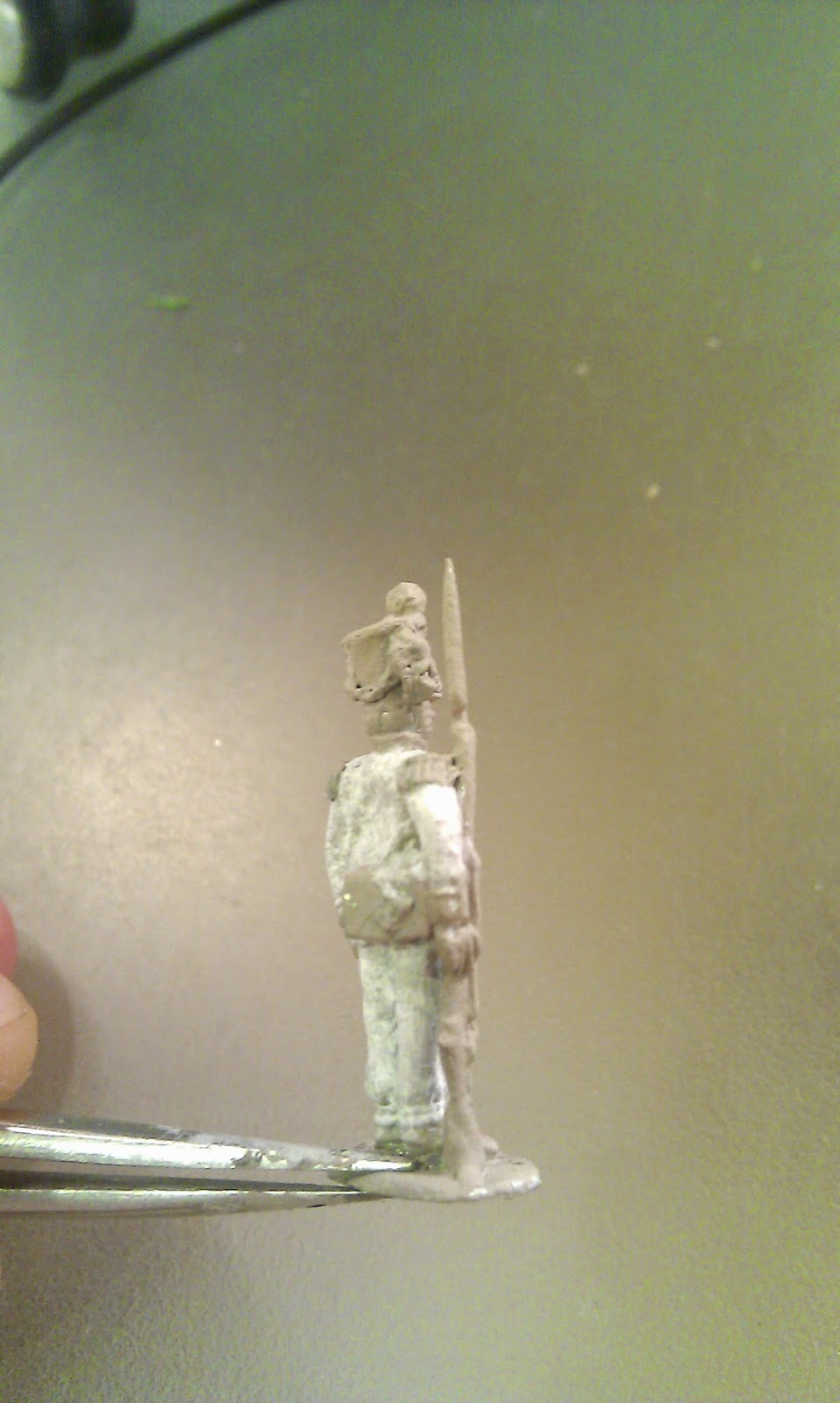 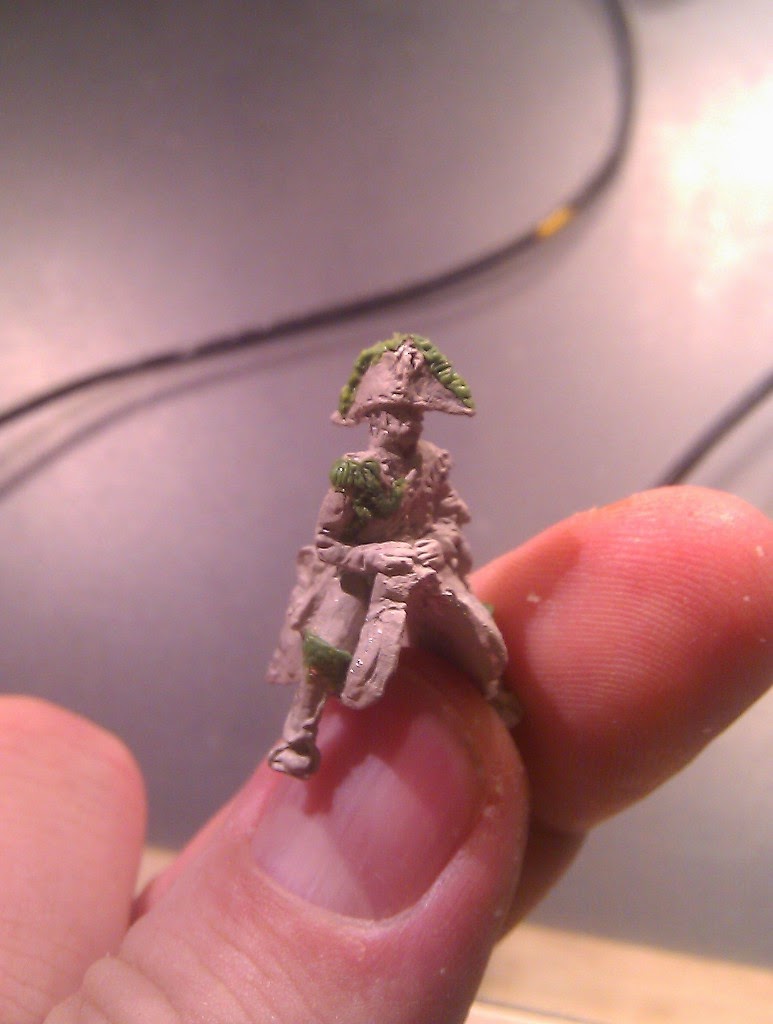 After that, the painting process started. Honestly, this project brought me to my limits. For months, I had almost nothing but Westphalians on my desk. Most of them infantrymen dressed in mainly white uniforms. I painted muskets and backpacks over and over and over again. This part, I simply hated. More then anyone might think. Again, I can only show my deepest respect for painters who are able to stoicly paint hundreds of the same figures in order to create a huge army - that's not my business. It's the shading phase, that brought me back on track, the moment when you start finishing figures.

Among all these figures, it were the generals and ADCs that I liked the most - perhaps because they all looked different. But as I'm slow on painting mounted figures, that part of the story required the longest individual time. Nevertheless, these figures would later be the main eyecatcher of the diorama, therefore they were worth every single painting minute. 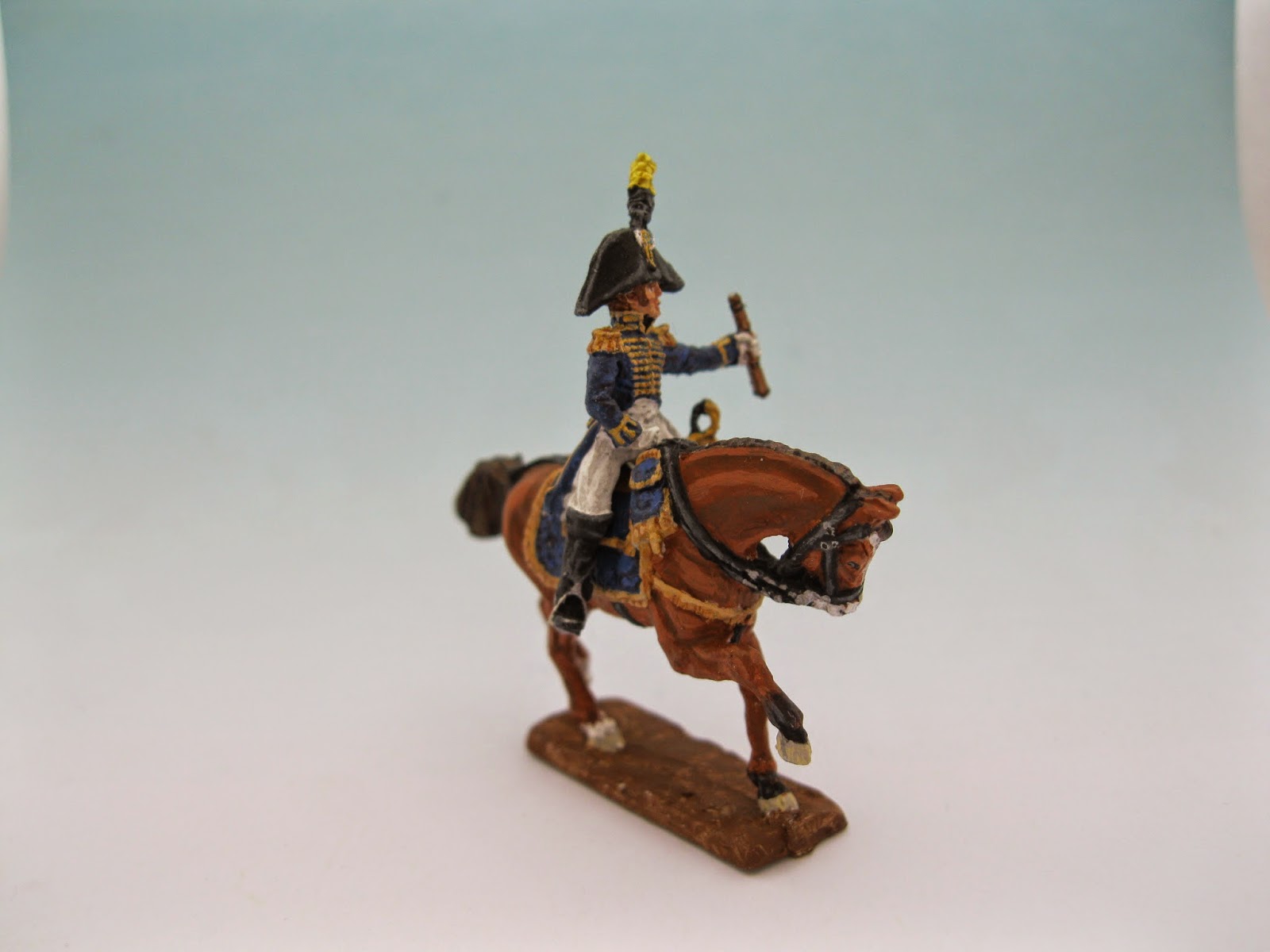 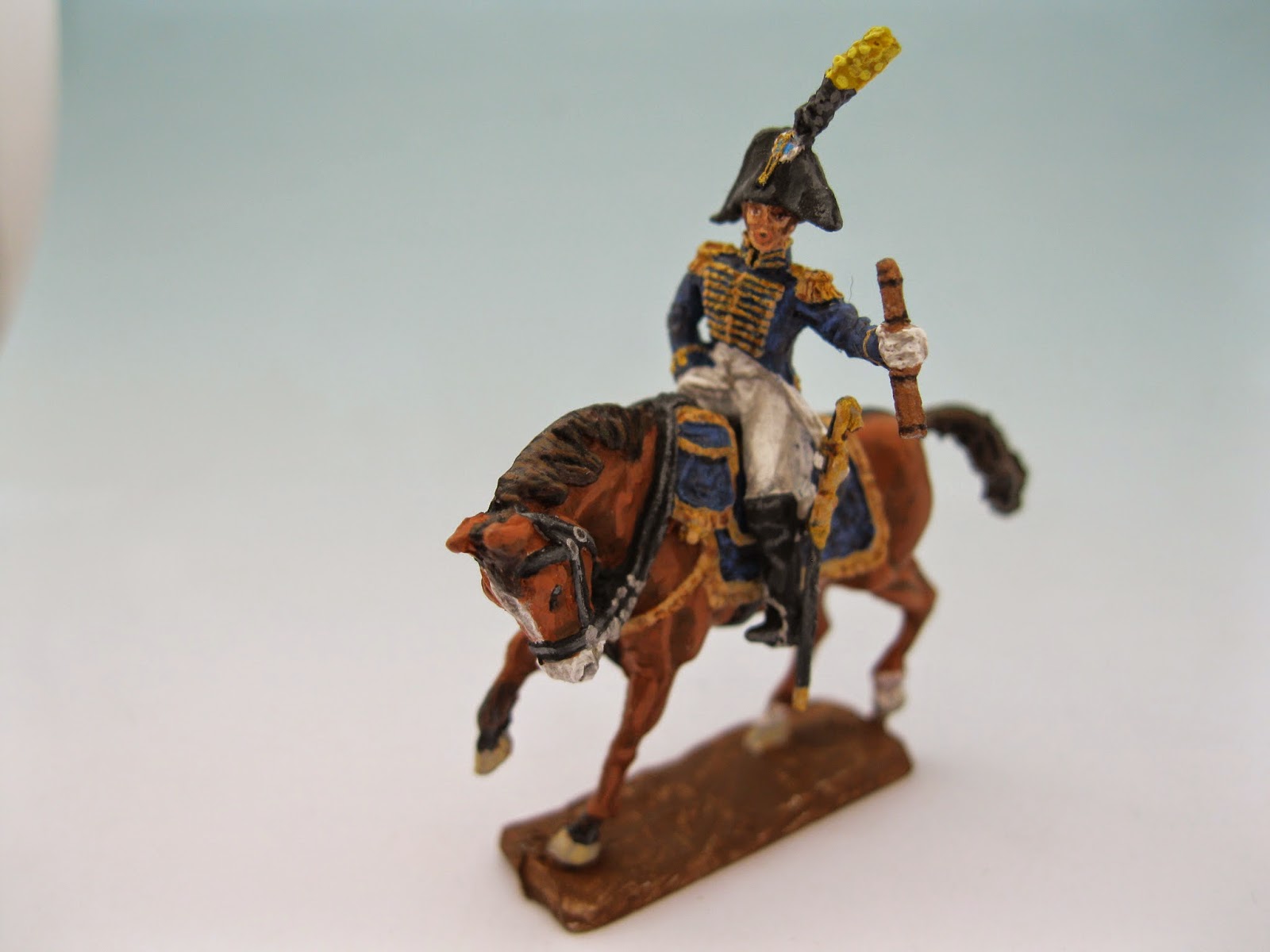 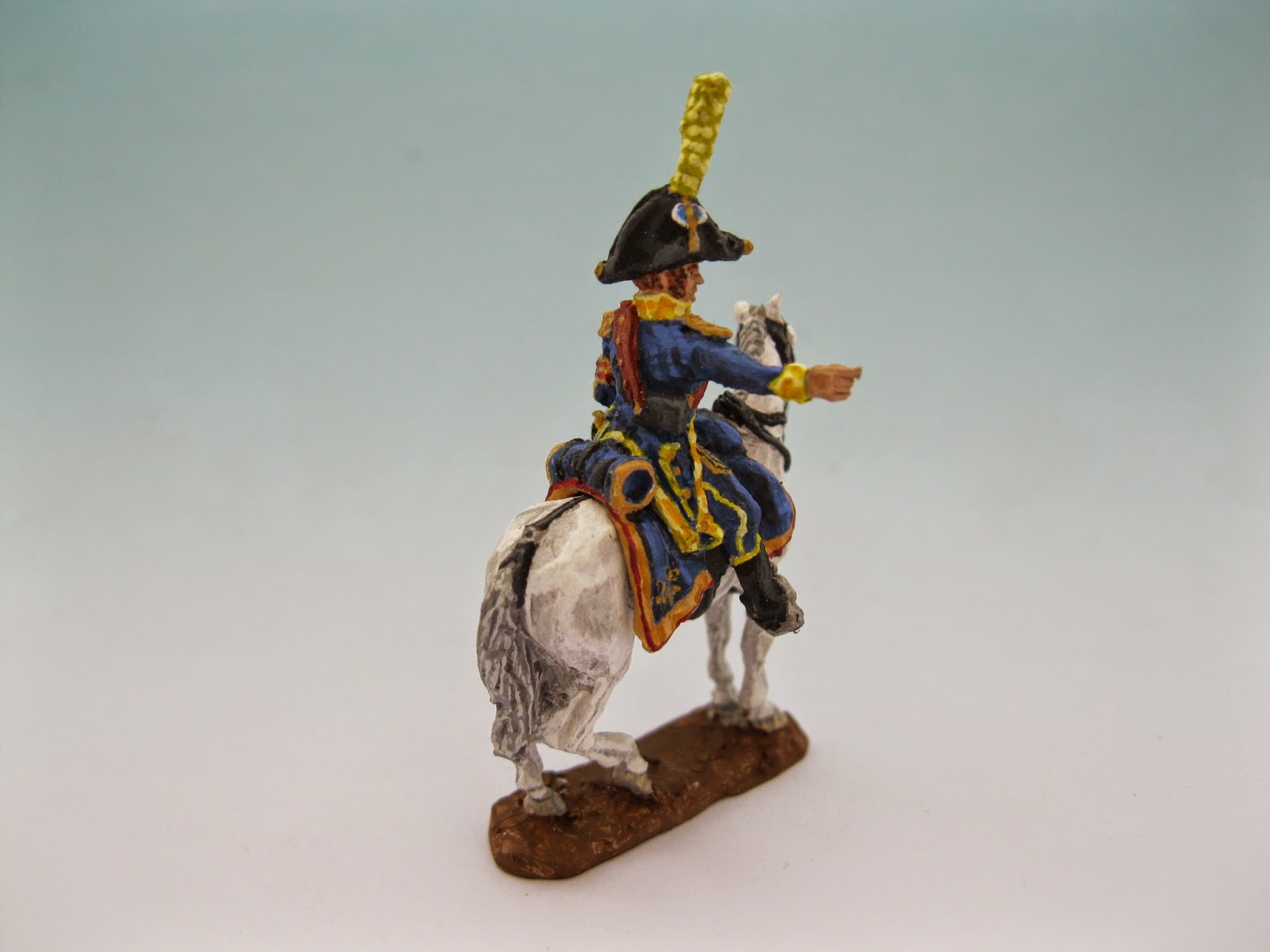 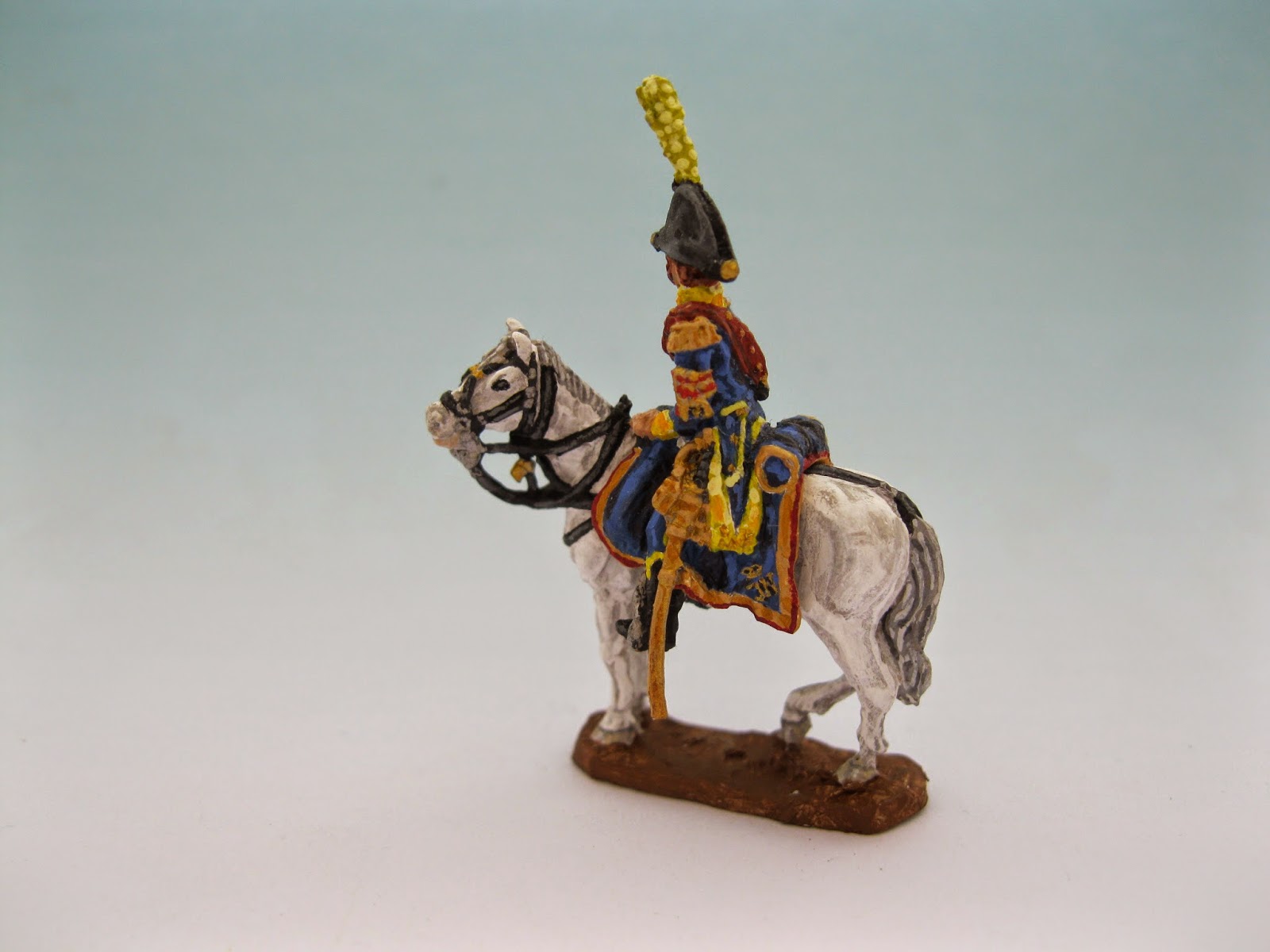 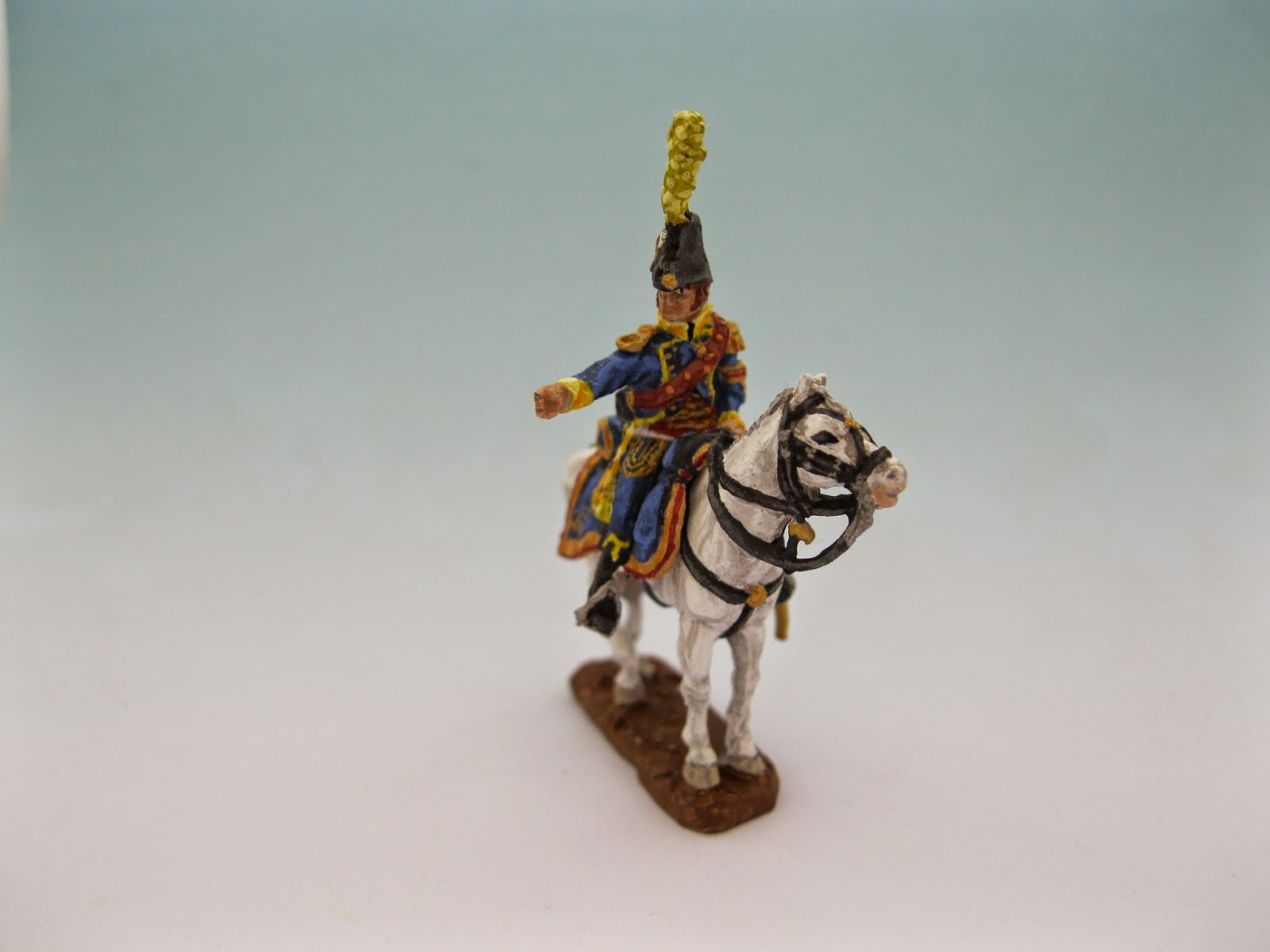 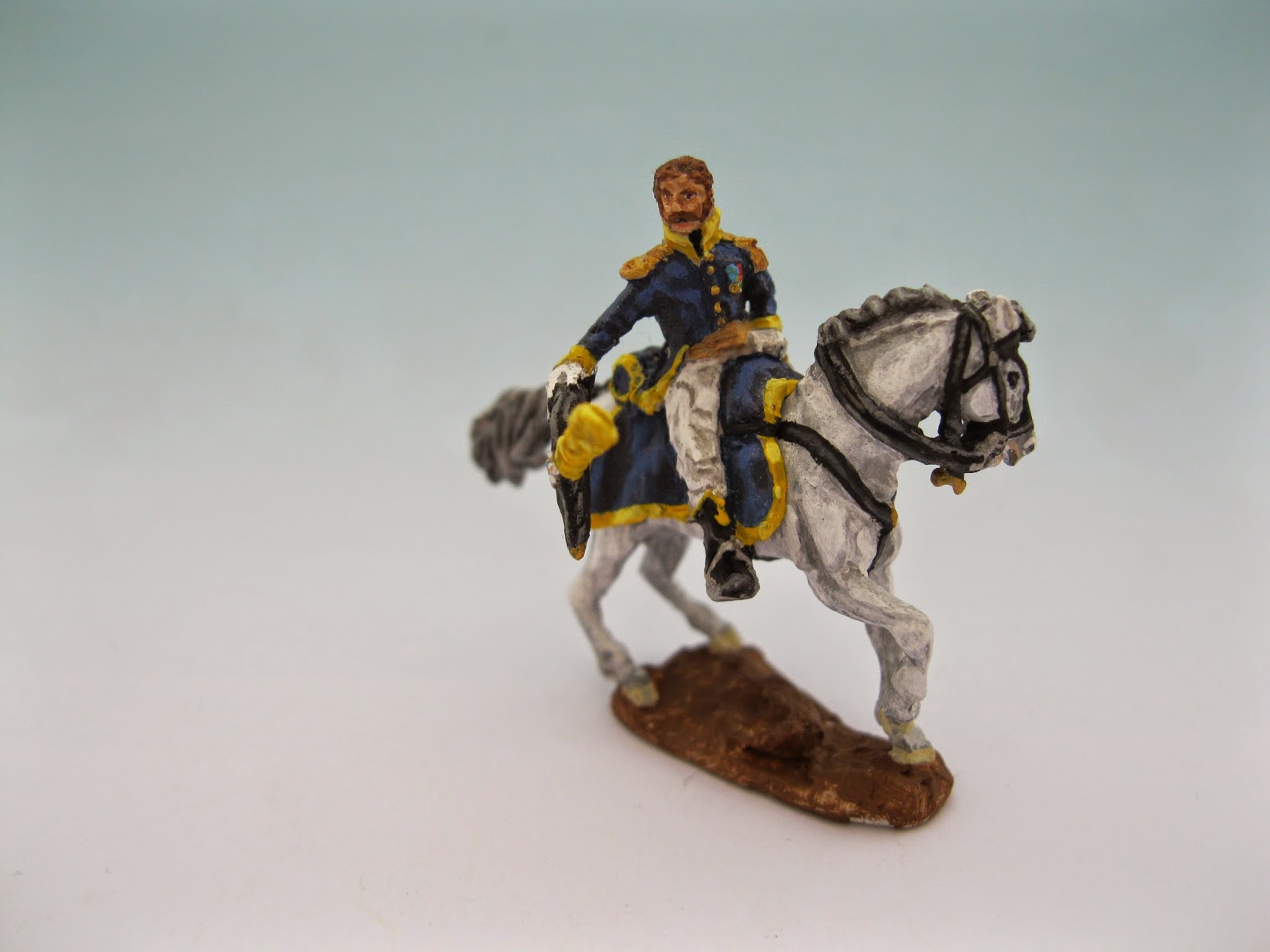 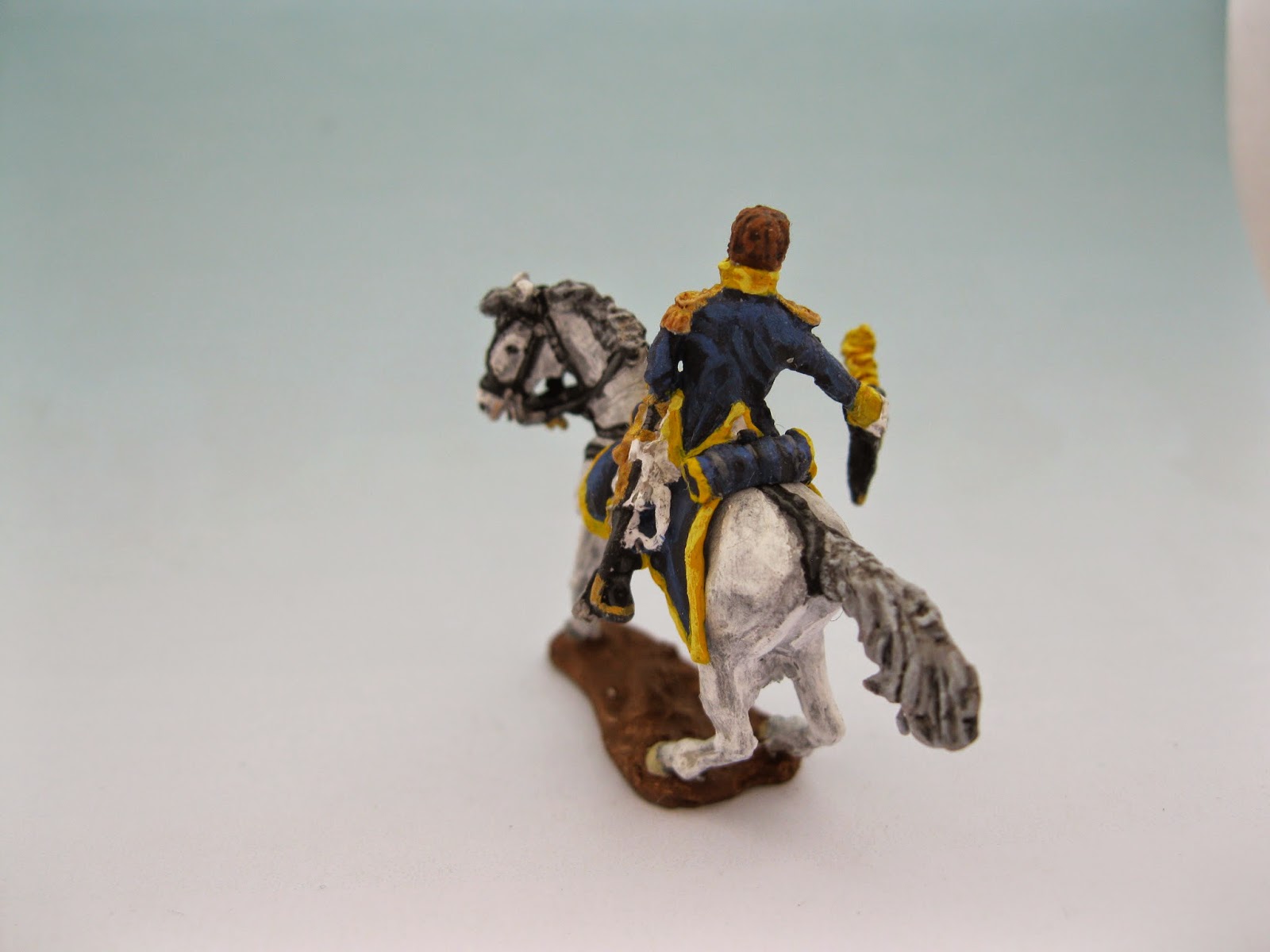 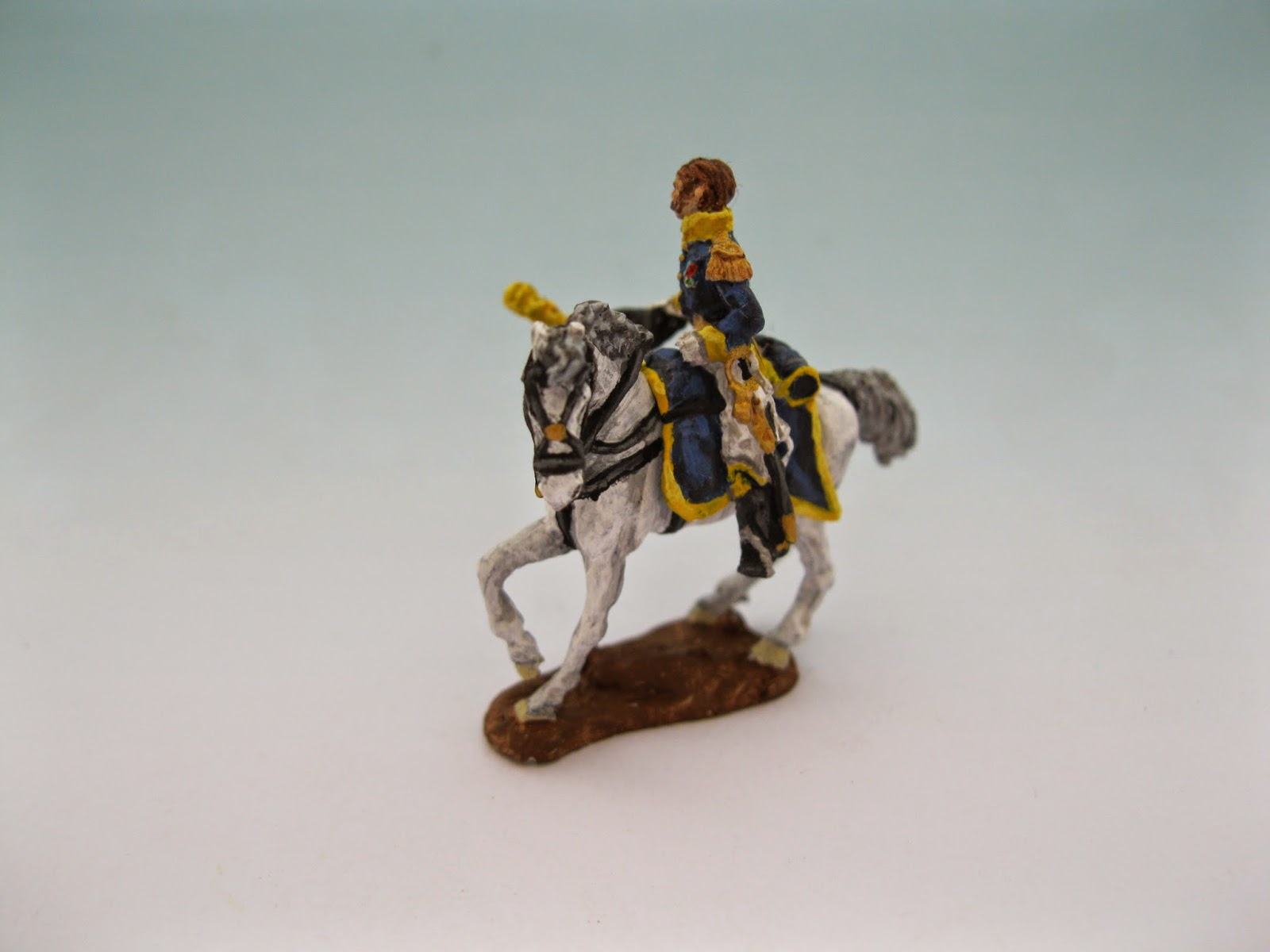 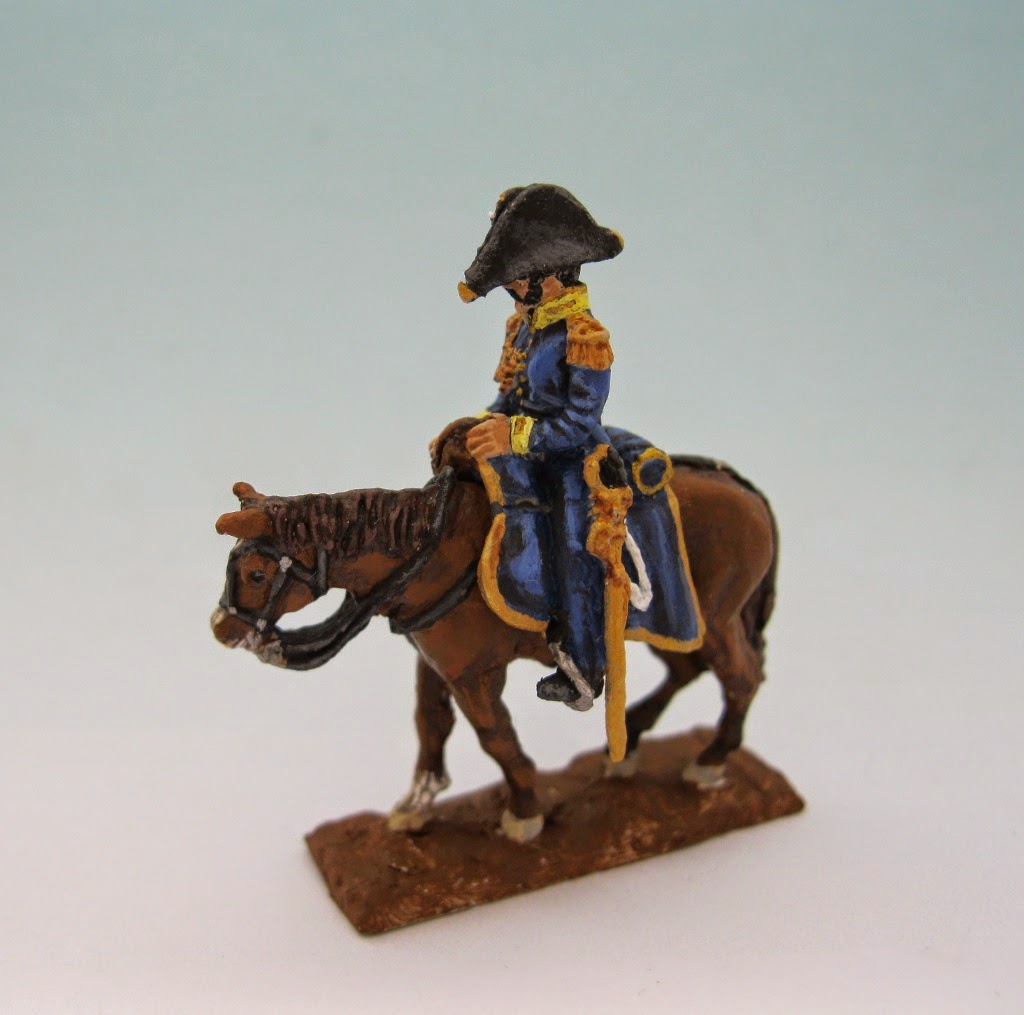 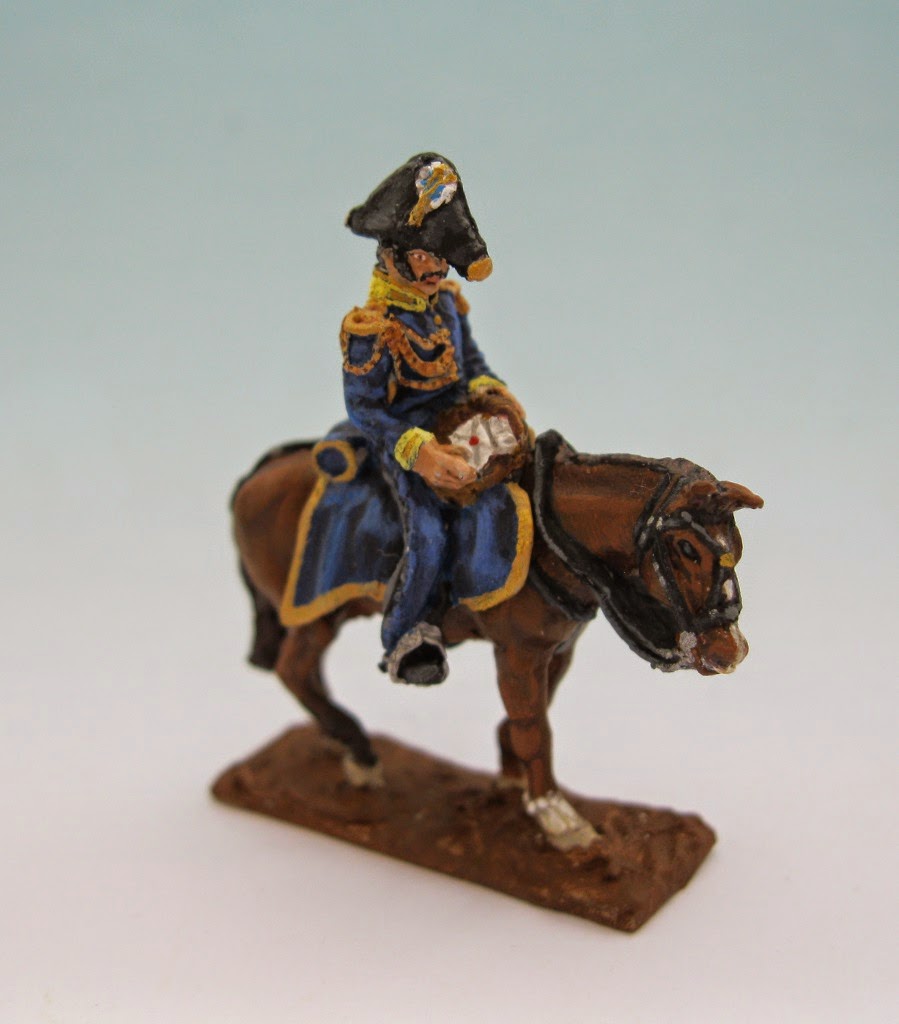 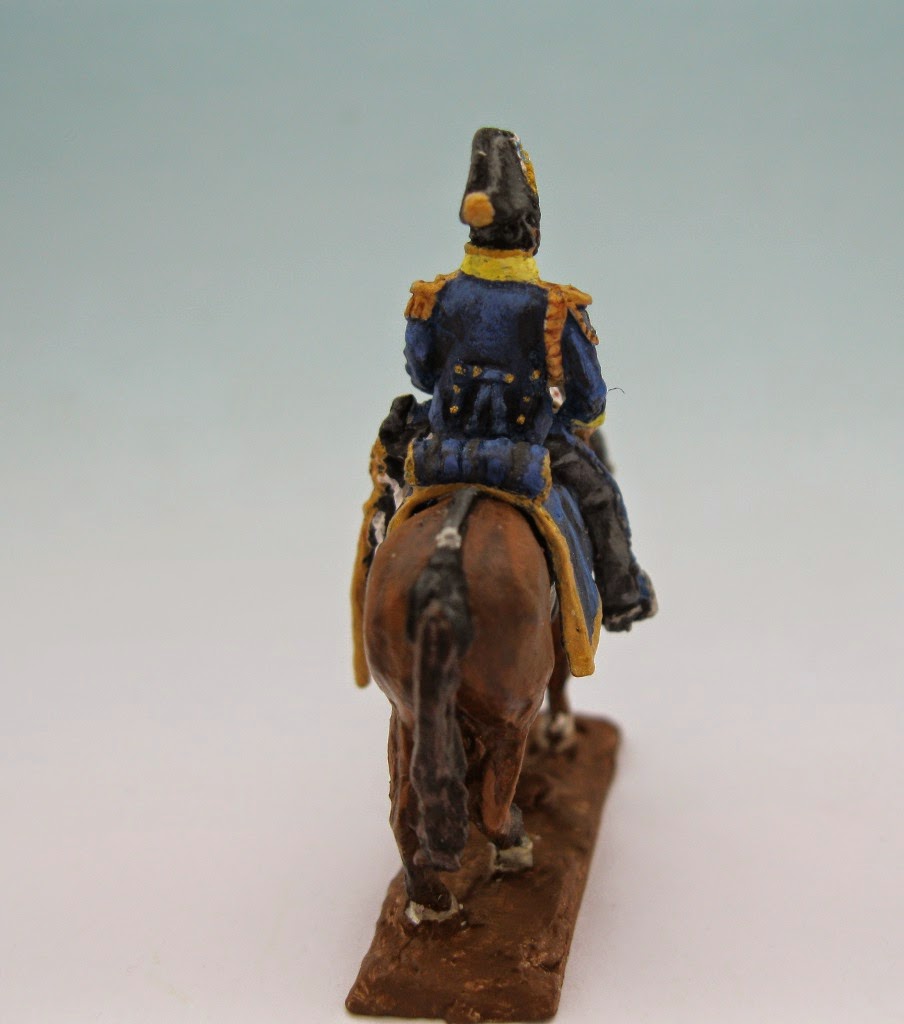 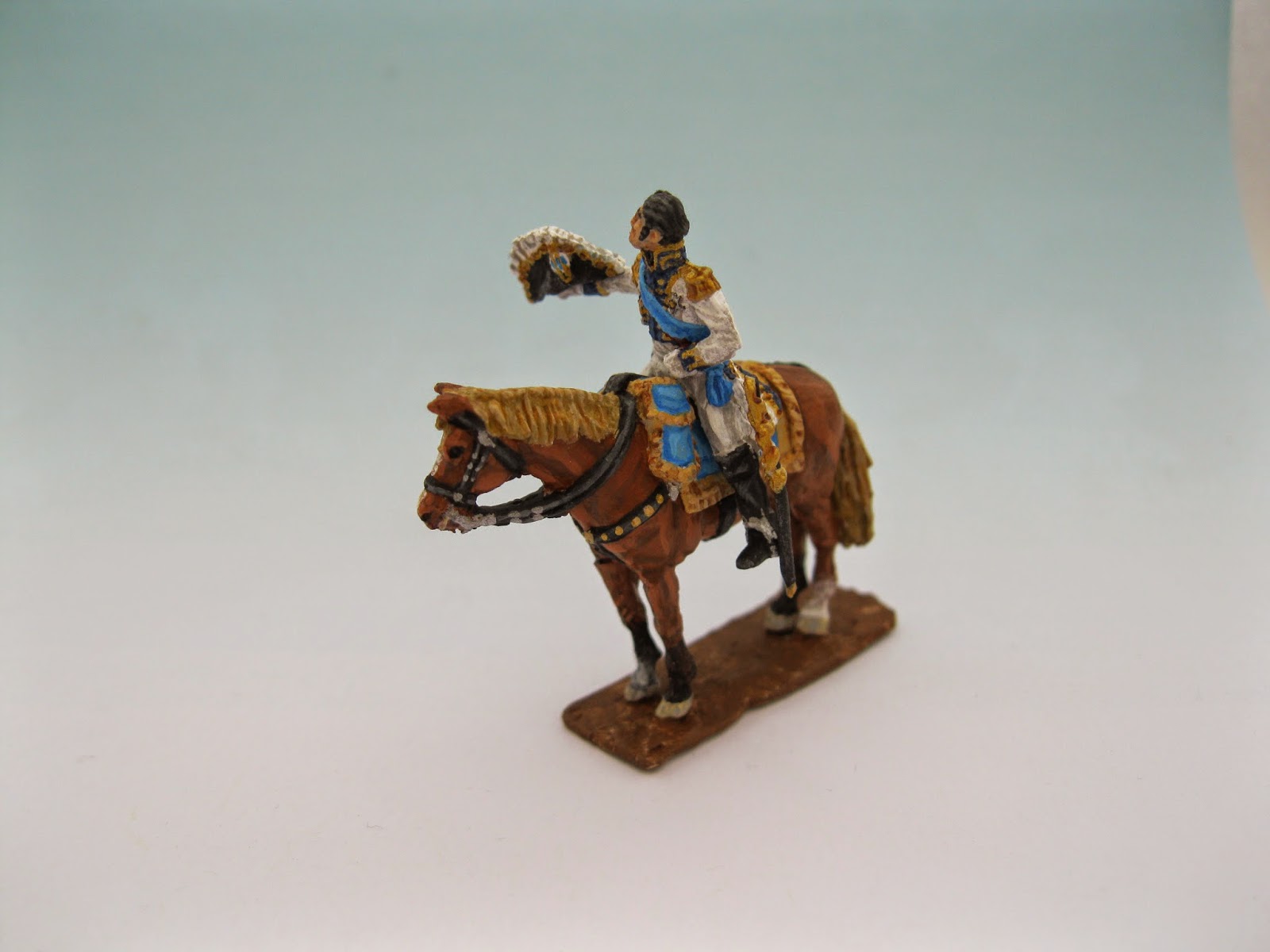 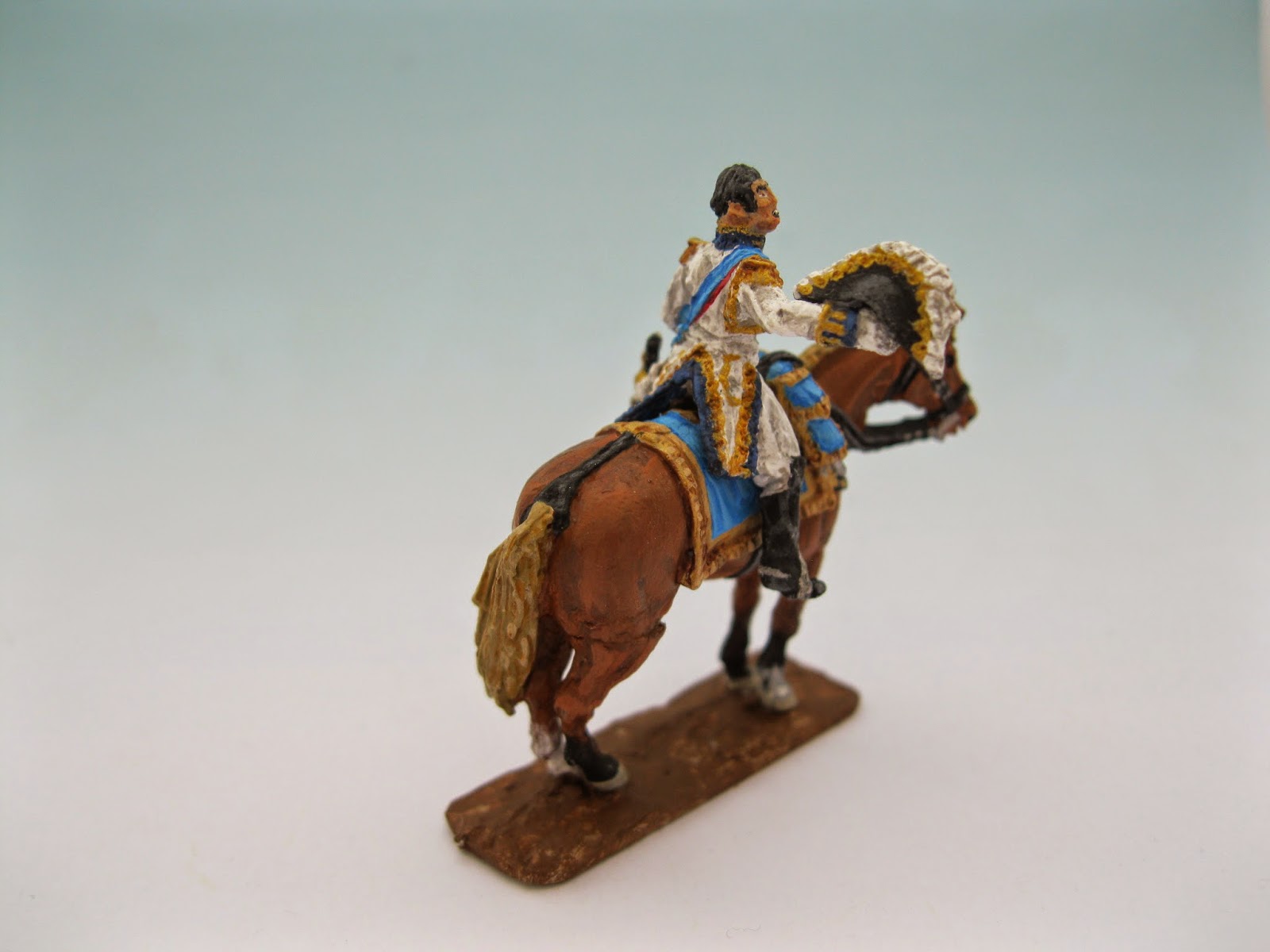 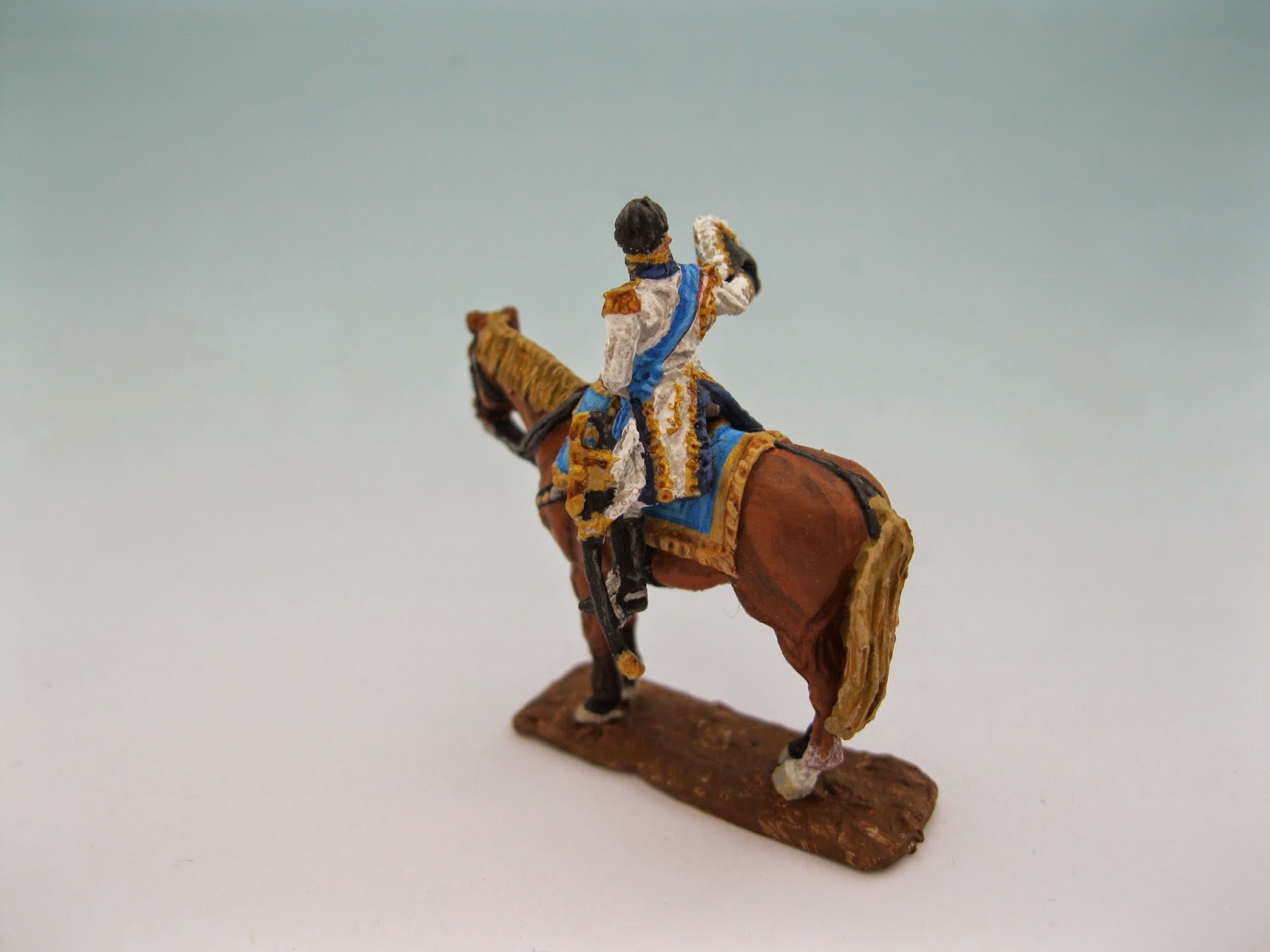 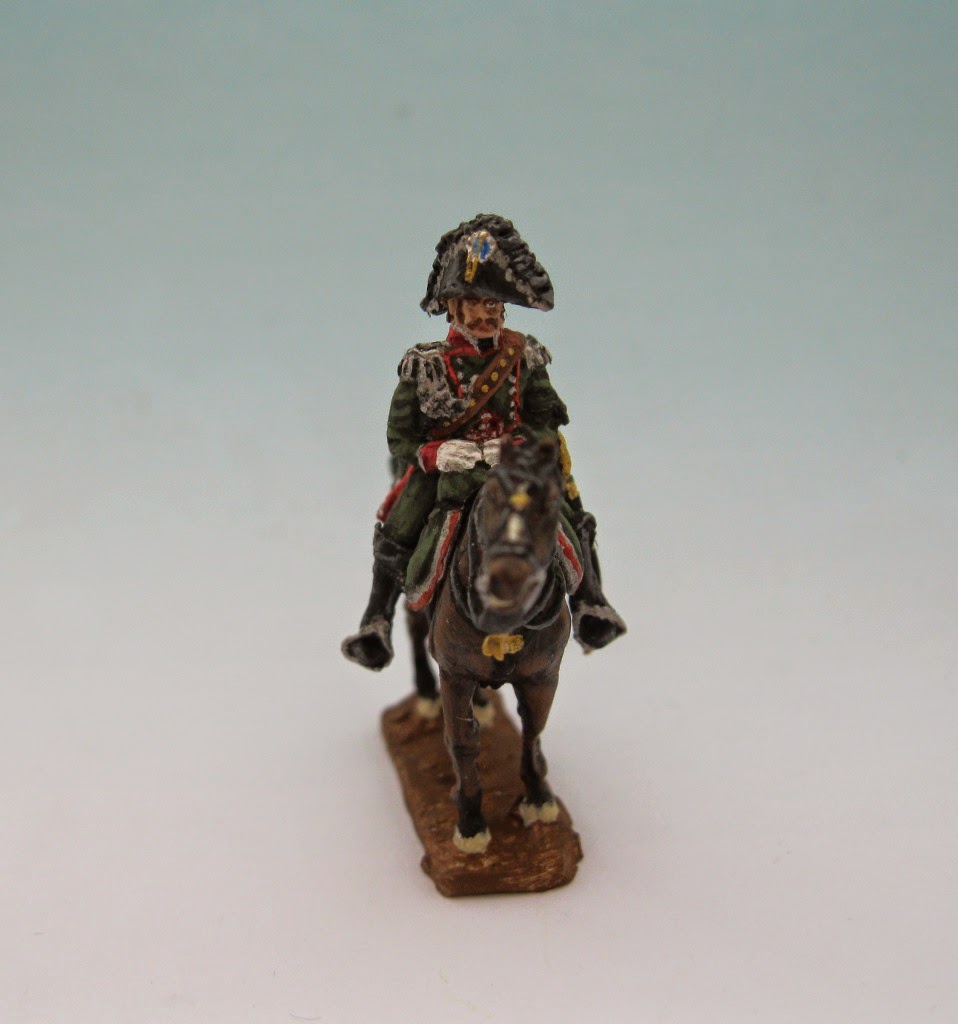 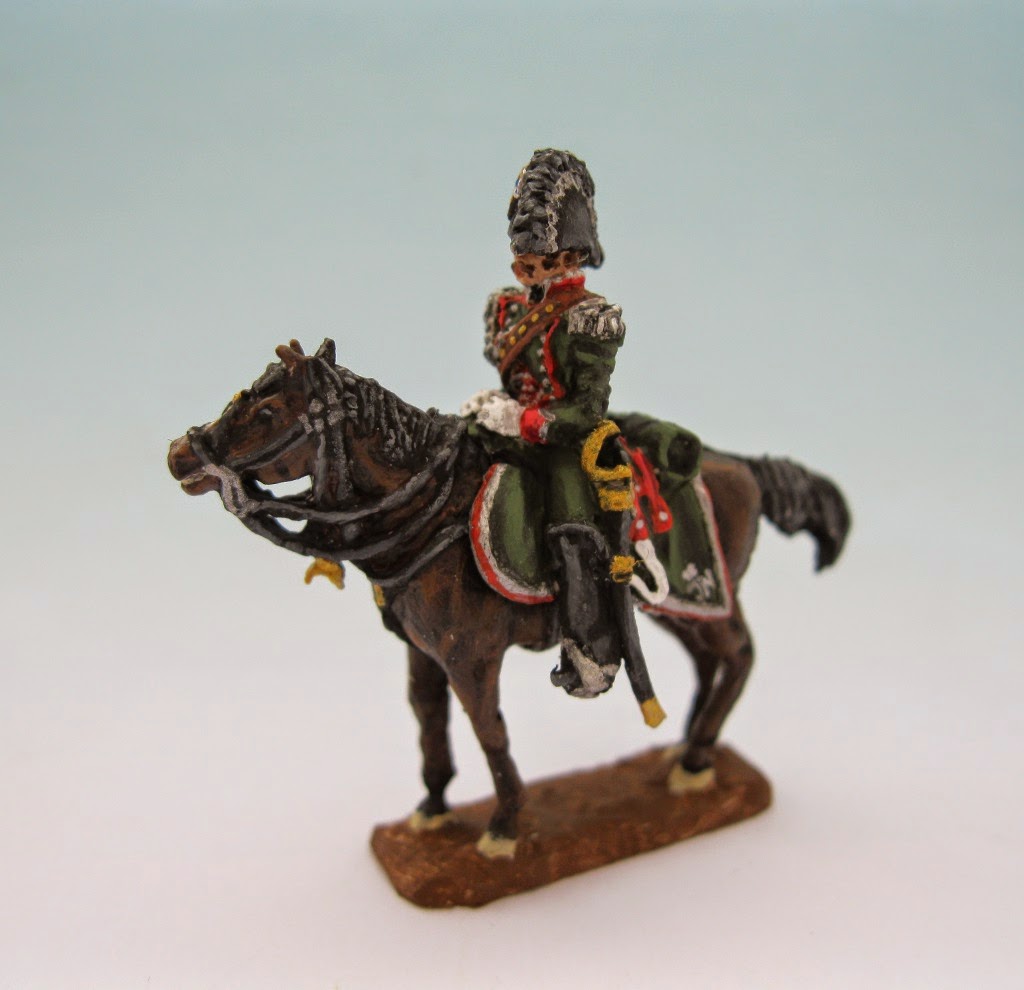 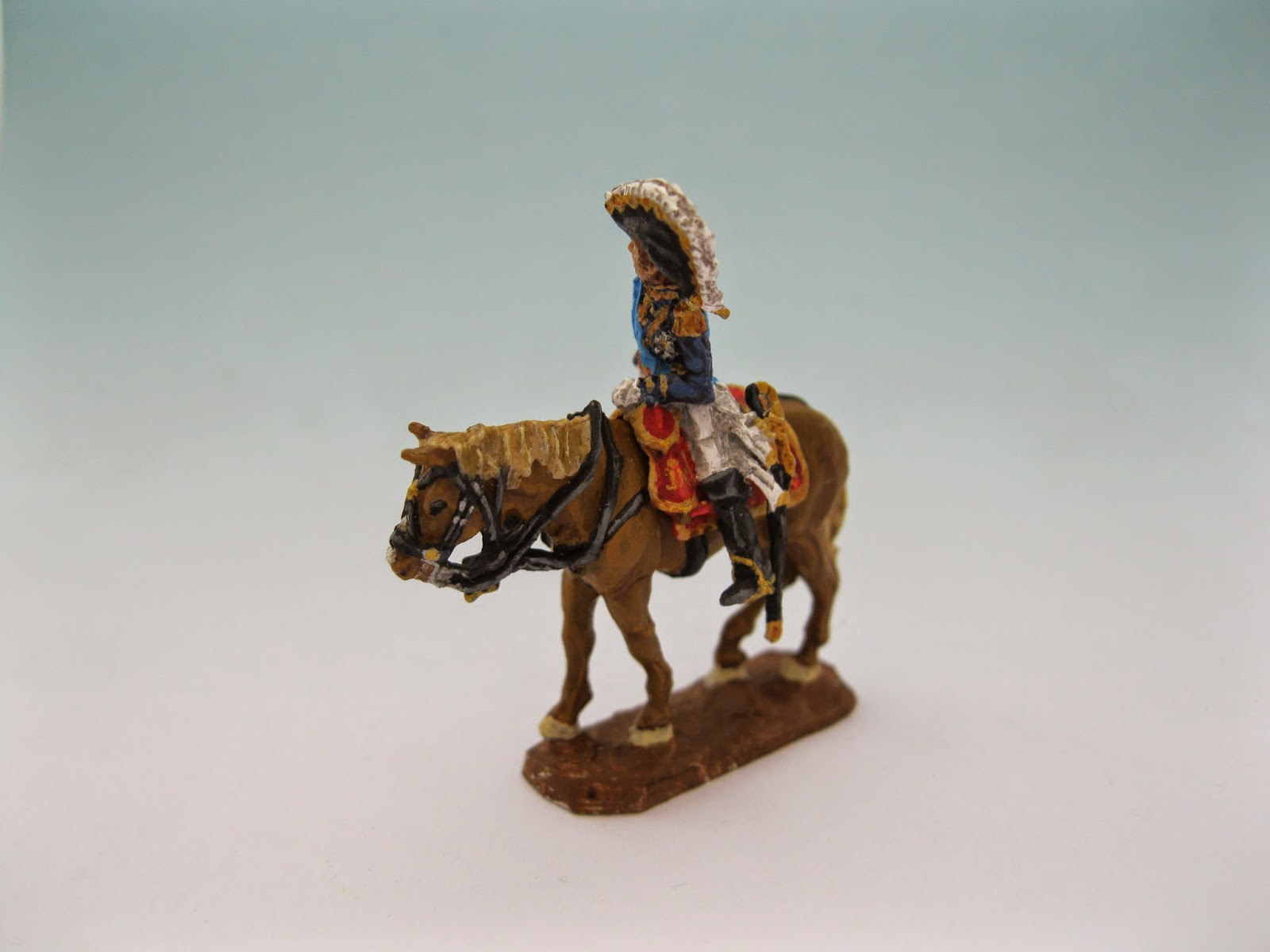 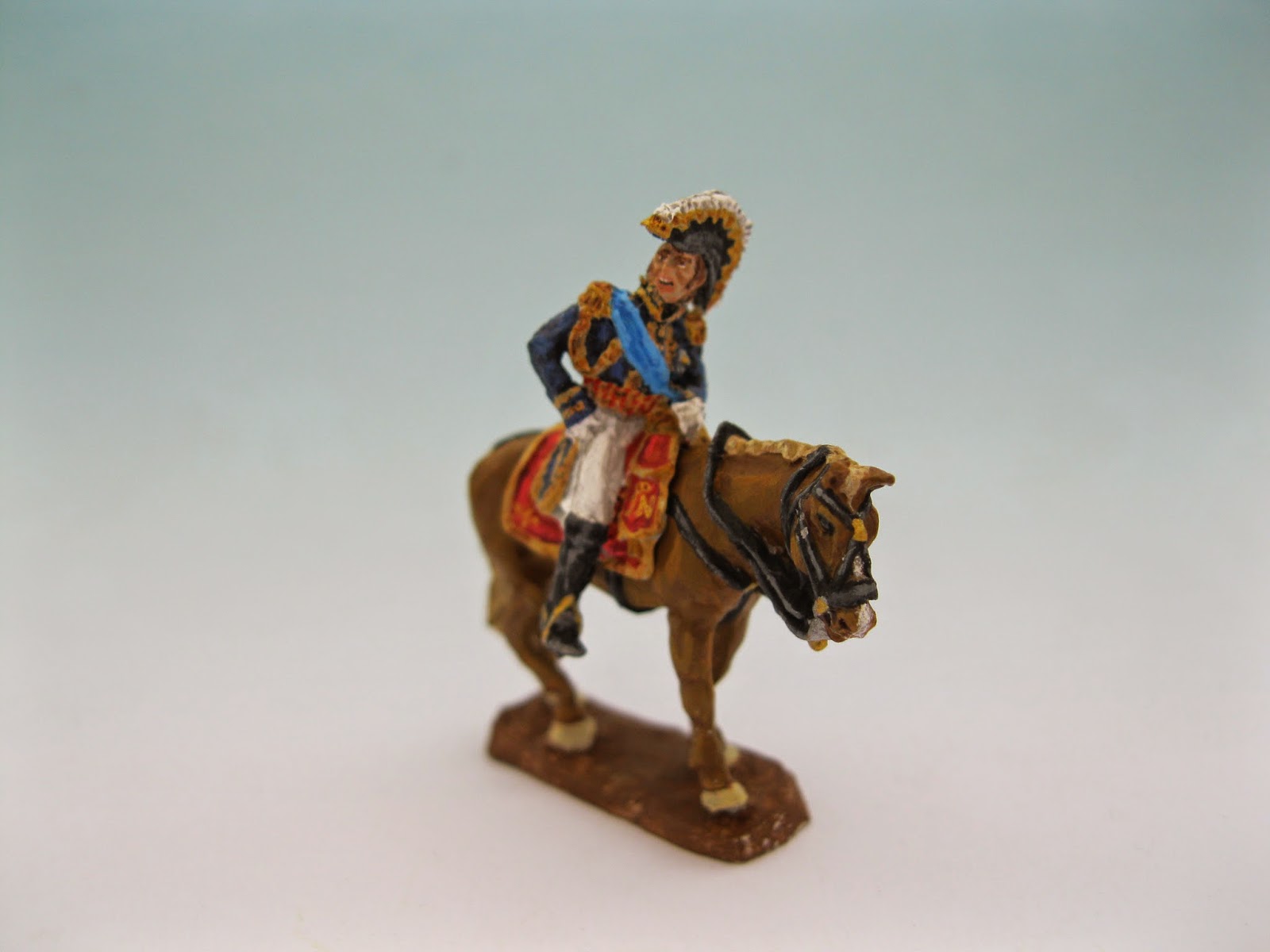 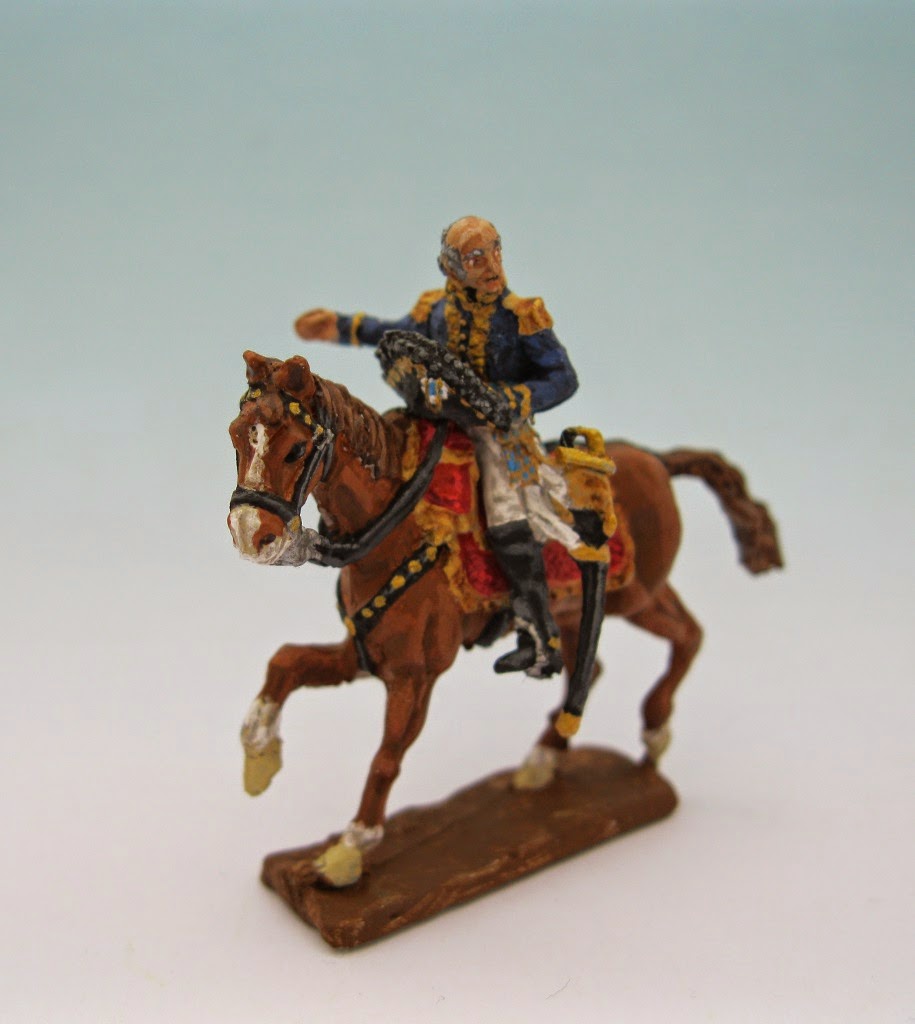 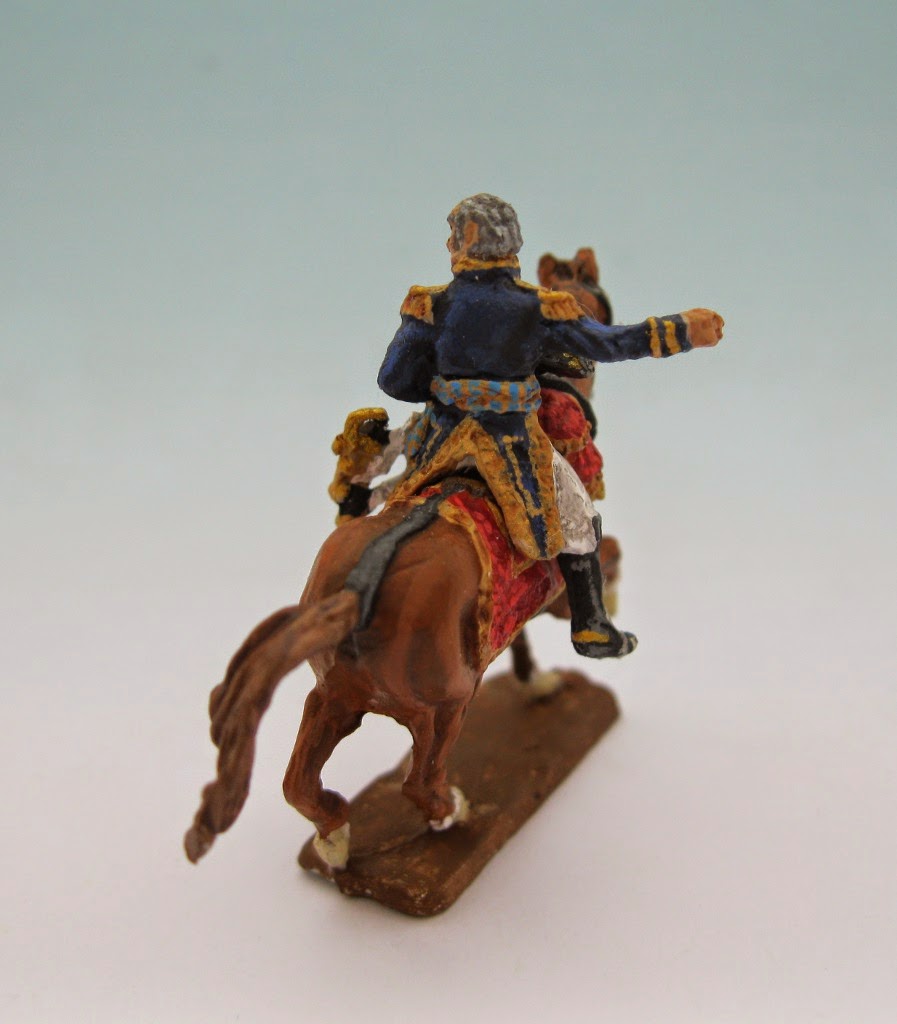 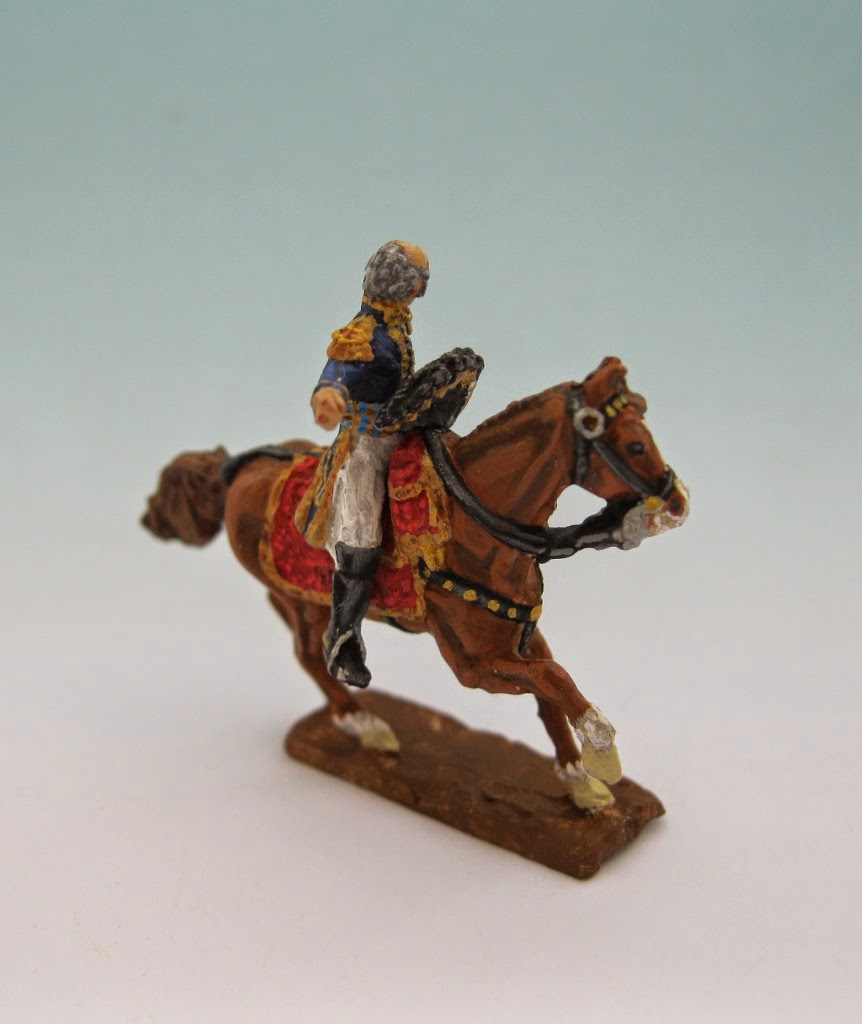 Once I had a bunch of figures, I put them onto my desk in the desired formation and measure how large the needed base plate would be. It turned out that I would need at least a 30*40cm base. When looking for something like that, my local thrift shops are always the first place to go to. And - as always - I was succesful. Not only did I found a picture frame of appropriate size, I also found a more gorgeous frame into which the first frame perfectly fitted in.
Why I didn't chose the more beautiful, larger frame for the diorama? Simply because the one with the thinner framework fits into my cabinet while the other one does not.

At first, I placed the figures on the base in order to mark the positions of the different units with a permanent marker on the glass surface.


So far, so good. After making some photos and marking the general unit positions, I removed the figures again. Normally, I fix the figures with their original bases onto the soil, then equalize the height difference with putty. This works fine with single figures, it also works fine with a single line or a handful of figs. But this here is different - working in the same way causes one main problem: you must do each line, each unit one by one to avoid reaching a situation in which you can't get behind or between the figures with your normal working tools.

Being the heaviest and - though to its' many parts - the most vulnerable piece of it all, the artillery gun (a greatly detailed model from ART miniaturen) would be the final part to be fixed. First would be the line infantry fusiliers.


To avoid such 'dead angles', I fixed each line separately, then put the putty around them and made the primary painting line. Then the next line was assembled and while the next line of putty dries out, the first lines get their initial ground covering. The oddest thing about this method is the fact that it's very slow. 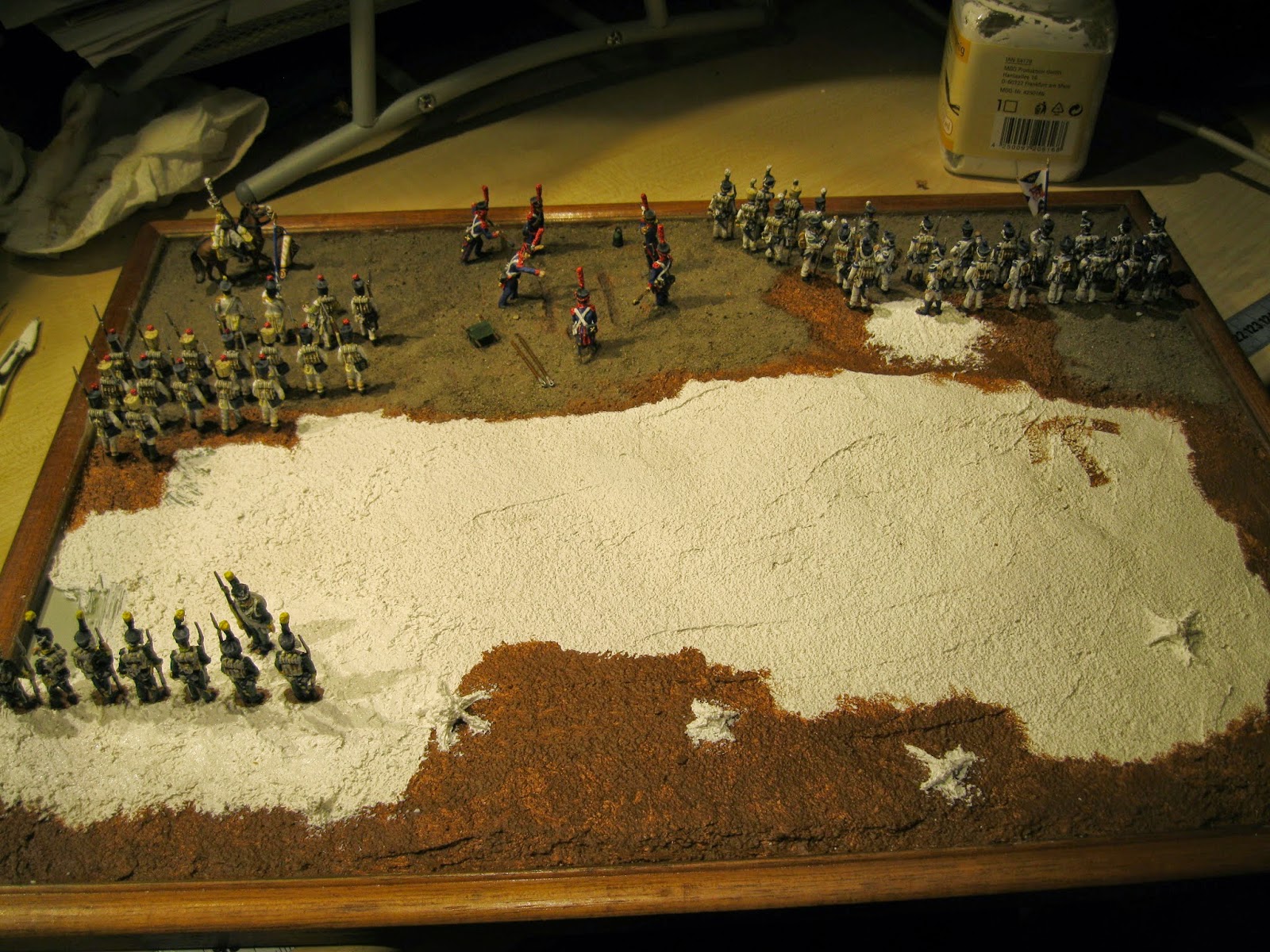 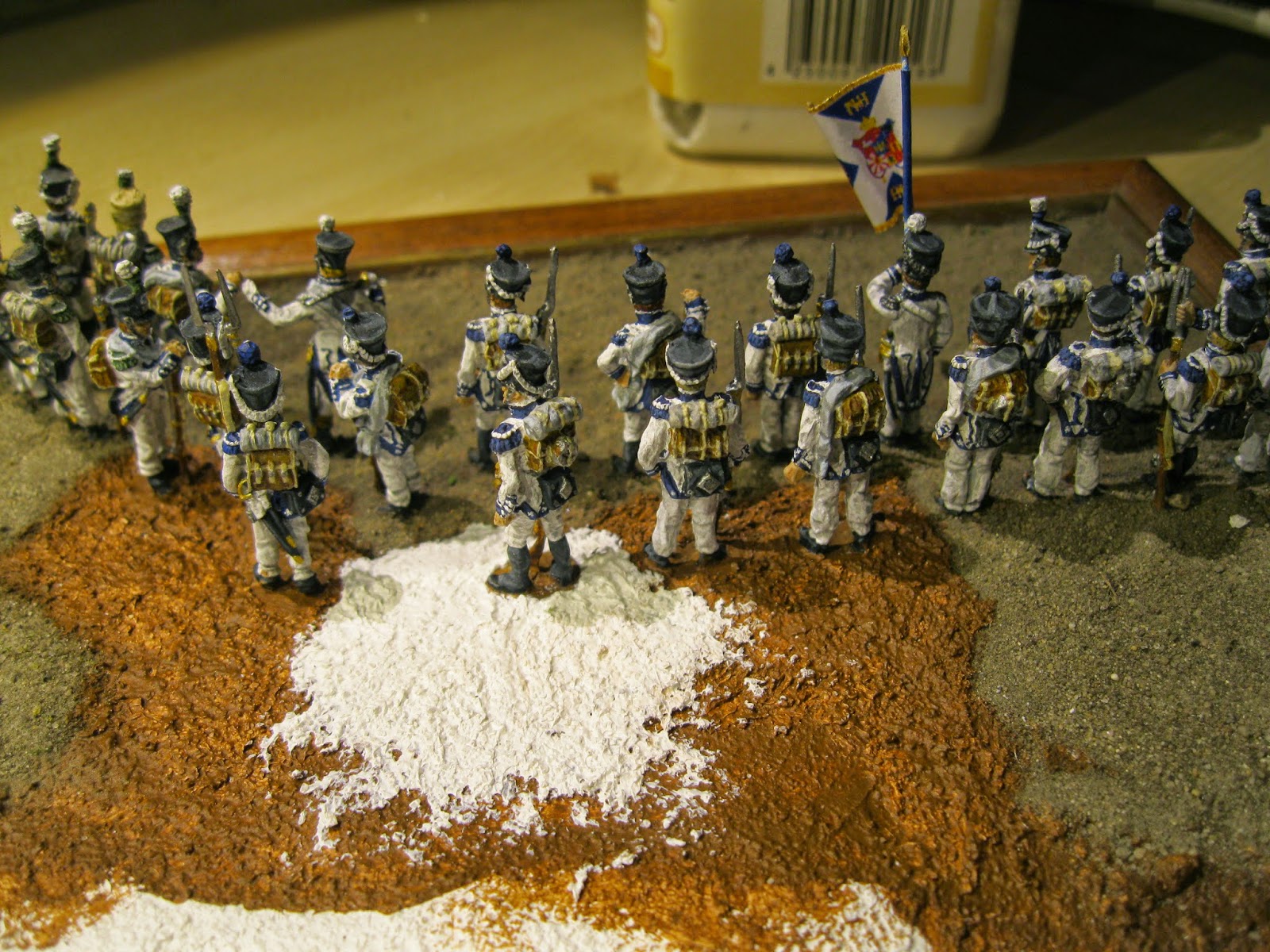 This part-after-part method took several weeks of time. I also tried to create tree roots out of that putty stuff which would later allow an easier mounting of the trees and bushes. In fact, the material did not dry out stone hard, but rather in a somewhat soft way. When I finally drew holes into the 'roots' and glued the trees into them, the heavier ones tended to flex to one side or the other - at the end, I had to make some improvisations.
Part 3 - all the beautiful flowers

Okay. Eventually, I had the complete diorama basis ready for finish. In order to give the whole thing some more naturalness, I had risen a small hill in the center of the diorama and avoided that the rest of the landscape became completely flat. Now I had to add bushwork and trees - but first, artificial grass, ground plants, flowers etc. had to be added.
Especially in that part where the marching coloumns had virtually moved before, I first installed the plant material, then stomped it down with a Q-tip that was dipped into dark brown dye. The result looked as if those units had really trampled across the field, leaving a muddy trail on the grassland.

And here are some impressions of the whole complete dio: 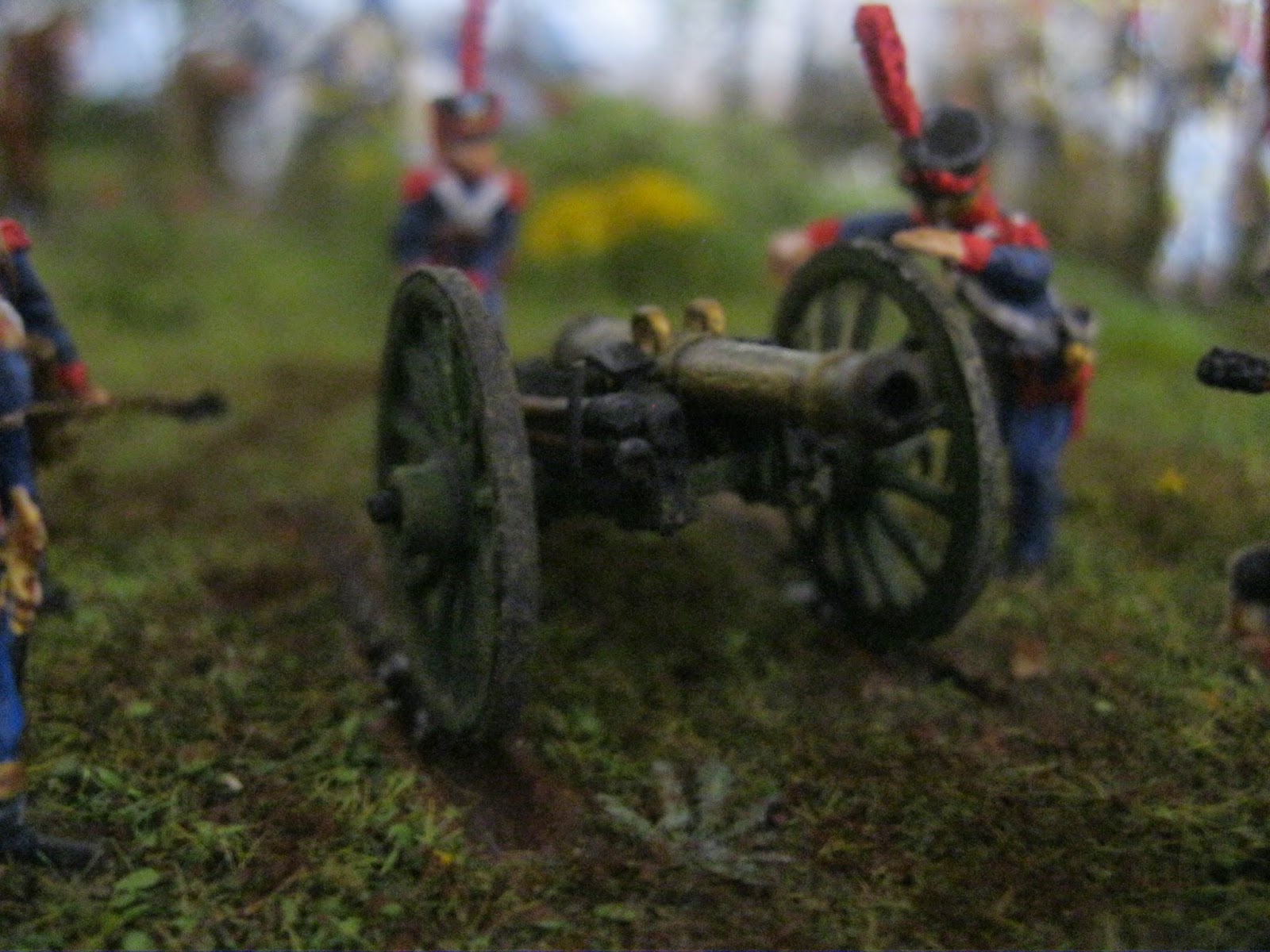 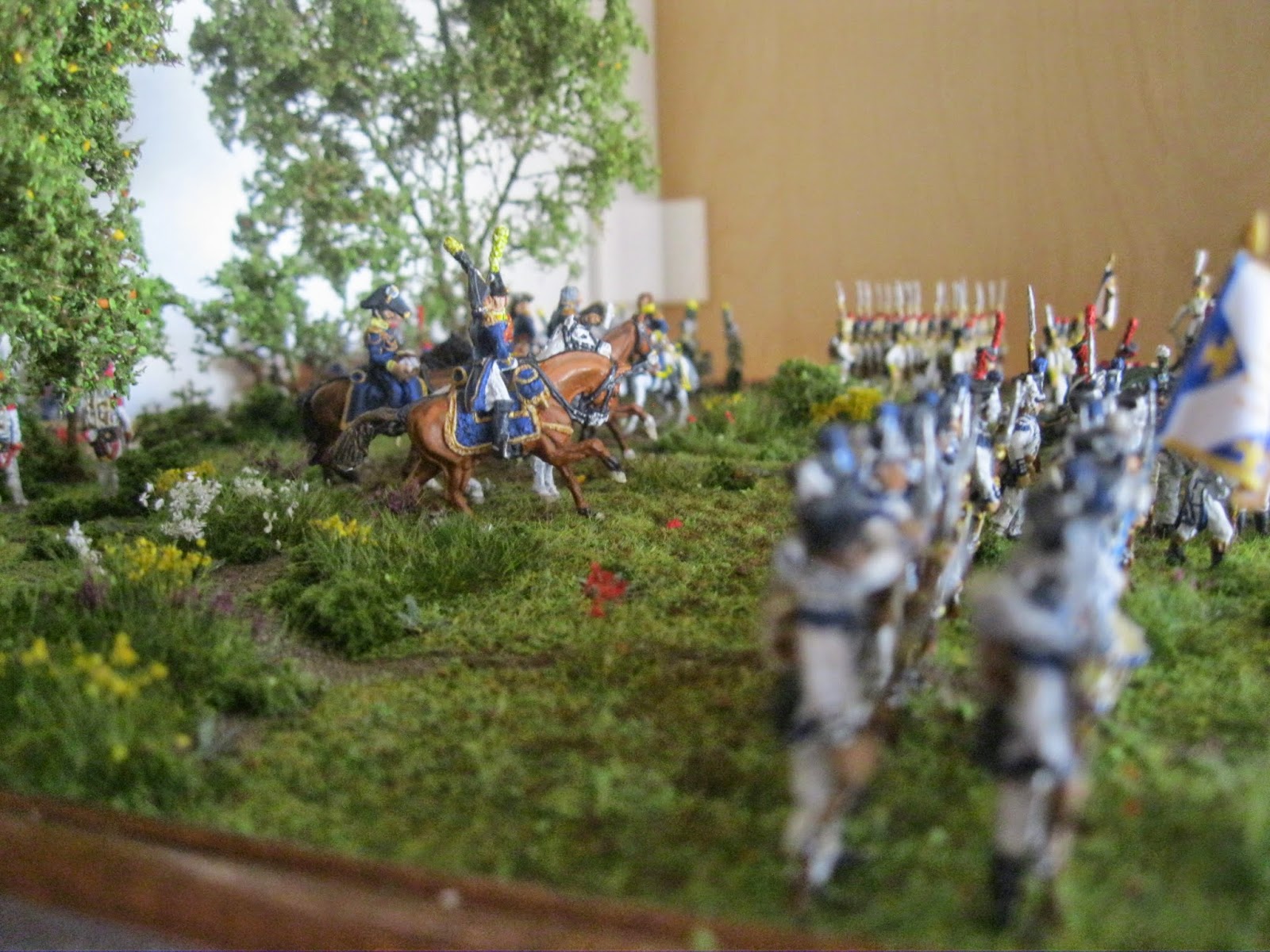 For my very first larger diorama, I'm really happy with the result. It also won me a bronze medal at ISSC in Heiden this year - which is a great reward for all the hours and hours of work. Starting in September 2013, I finalized this diorama in June 2014, when I made final corrections on the trees and cleaned up every single figure. In fact, I learned much from doing this work and it certainly will help me to improve with other diorama work in the future.