Among the little states that formed the so called Rheinbund was the Principality of Lippe. It was a small state with Detmold as a capital and never sent more then a batallion into active duty.
This battalion served both in Tyrol and in Spain and was finally newly setup in 1811 after facing a lot of losses in the catalonian campaign.

When Napoleon attacked Russia in 1812, these troops were integrated into the 5th Rheinbund regiment which was set together by troops from the principalities of Lippe and Anhalt.

The prinicipality units formed the so called 'division princiére under the command of General Daendels, eventually becoming part of the 34th division under General Morand. They saw action at Kowno and Wilna, where later stationed as garrison troops of the fortress of Danzig from where only a few men returned home. 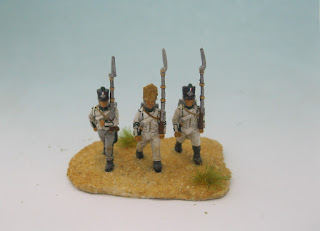 I painted the fusiliers on basis of a uniform sheet several years ago - they were in fact my first bring-and-show-contribution for the very first FIGZ I visited.  That was even before I really was engaged in that Pre-Bardin-uniform project. In the meantime, the way of presentation - basing, style, intention - has changed very much.

In addition, I not only found Knoetel pictures about Lippe units, but also a Histofig plate. They showed the complete range of unifoms of this battalion and as I found it unlikely to scrape off the old figures from their sandy base, I just decided to paint this unit once more. 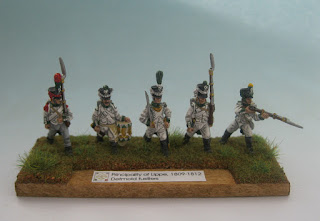 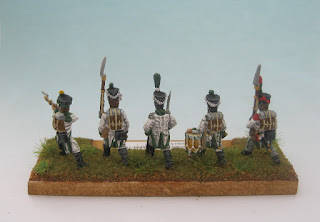 No, that's not a painting error on the drummers' pompom and the grenadiers plume. It's a light reflex. :-(

Plus I found some new uniform plates for Frankfurt soldiers - so I'm sorry that I'll have to refurbish that unit as well. And colonial units... My oh my...

Here's another unit for my Pre-Bardin uniform project. In fact, this one was quite difficult to paint - not because the uniform is that much complicated (except from the stripes-and-blue-circles-pattern on the drummers' arms) but because it's one of these units whith a uniform design that seems to be heavily disputed among the various artists.


Boissellier, Marbot, Knoetel, Humbert - the well-known painters of Napoleonics units all seem to have gone wild about this subject. Some show white, some black gaiters or light infantry boot-style gaiters, with or without tassels, in red, white, whatsoever. There are pictures with red and pictures with blue epaulettes - same with cuffs. Total confusion.

What is sure is that the Illyrien regiment was founded in 1810 with general uniform style of French light infantry. The Illyrien provinces were the former Austrian occupations along the Adriatic sea - Istria, Croatia, Dalmatia, Carinthia - with Ljubljana as a capital. It existed until 1813. 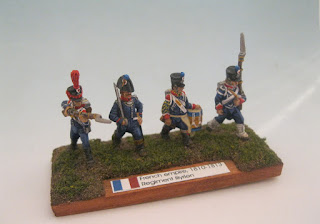 Parts of the correspondence between Napoleon, his military attaches and the responsible governors and officers for this regiment still exist. It seems that its' worth in battle was rather poor. When on action away from its' country of origin, the regiment suffered badly from desertion. 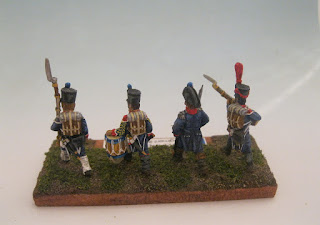 Well - I had to make decisions. So I went with Humbert and Knoetel. Others may tell me that this might be 'historically incorrect' - but then they must proof me that their sources are more accurate. ;-P

Meanwhile, the long-term Pre-Bardin-Uniform project continues. I have just finished another more unusual unit: Italian coast guard (cannoniers garde-côtes).
It's not that much that I found out about this unit, except that they were organized at company strength - approximately 120 men - and that the highest given rank among them was sergeant-major. Because of that, I've attached an NCO to the trooper and the drummer. 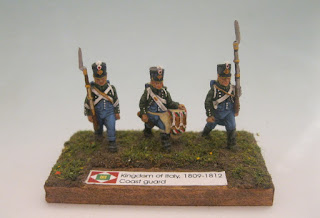 As no officer was mentioned in the reglementary, I suppose that they stood under the command of a fortification commander or were attached to other units - garrison battalions, for example 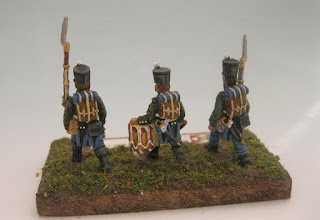 Not the most splendid example of work, I know. It's more kinda standard sort of... whatever, they're not that bad anyway - and I have completed another unit. ;-)
Posted by Zed1 at 12:32 PM 1 comment:

I stumbled accross a picture of a light cavalry lancer of the Grand duchy of Berg (one of the many German minor states allied with Napoleon), dressed up in white and crimson (or dark pink, if you like). It fascinated me so much that I wanted to have one of my own.

Unfortunately, this is a unit not produced in 1/72 - as far as I know. I had to build one. But how?
At first: the uniform is basically that of a line lancer, except from the cords and strings and - of course - the Czapka hat. Czapkas were Ulans' hat of choice - but who has single lancers and single Ulan heads? Franznap has. So I placed a small order. 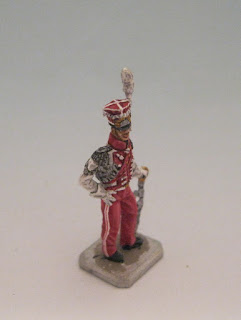 This is how the result looks like.
Second epaulette, cords and the small ribbons on the button sides have been added with green stuff. 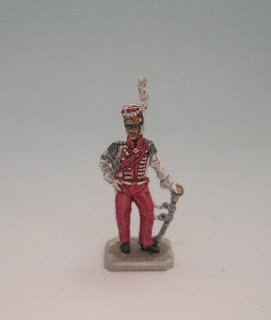 Same with the Czapka, where I added cords, plume and the front plate. 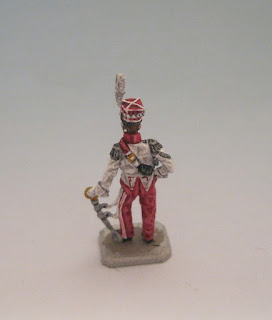 I can't help loving that uniform. Flamboyant, colourful and well... something different then the usual black, blue and green.

Quite a lot of people have painted up some conversions - now I've got my own one.
Posted by Zed1 at 1:42 PM No comments: