Another thing that I bought back at FIGZ was this assembly of command figures of Austrian-Hungarian fusiliers.
What I have in mind is a coloumn of infantry changing from march into charge. The command figures where a test to find out how the painted result would like. Next thing would be to buy the infantrymen. The figures are metal miniatures produced by Schmaeling miniatures (link) 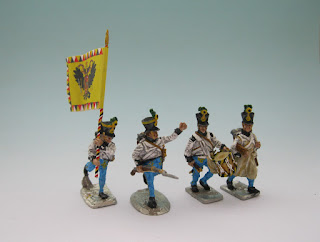 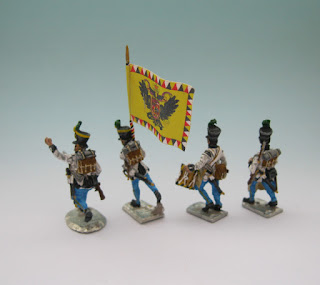 What I like about this uniform is the combination of colours, especially the combination of blue and white.
The overall look is a bit edgy, as with most Schmaeling figures. Personally, I like them a lot because that company offers a wide range of poses.

Point is, that I'd need around ten sets of metal figures from Schmaeling and Franznap to complete the intended diorama. Which mean saving a lot of money and investing a lot of painting time. First-world-problems, eh? :-)
Posted by Zed1 at 1:38 AM No comments:

During my rearch, I found a Knoetel page showing a Grenadier from the Duchess of Saxony Coburg-Saalfeld, one of these tiny German dominions which formed what was called the 'confederation of the Rhine'. It did not make a big contribution to the army that followed Napoleon to Russia in 1812, but I found that uniform extremely nice and therefore I simply wanted to paint it in order to have it in my cabinet. 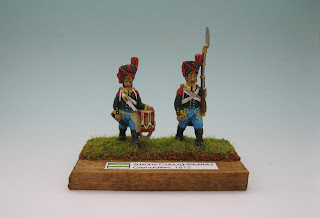 I know that this isn't a first class paintjob. It's more of an easy quick paint job - I simply couldn't withstand that yellow, blue and green uniform with that little bit of red. Technically, it is not an addition to my PreBardin uniform project, because it's not a double-breast uniform jacket. I had to trim away vest, breast parts and buttons to make this conversion. 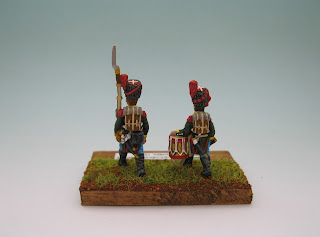 After founding of the confederation of the Rhine, Napoleon ordered that the Saxon dominions should have to assemble a regiment which was sent to Spain where it was completely whiped out. When preparations for the attack on Russia where made, the Saxon dominions again hat to raise an own regiment, which included soldiers from Coburg-Saalfeld.
They arrived in Russia at the time that the main army was already on retreat. Freezing cold, cossacks and the harshness of the environment nearly whiped out the dominions' regiment as well.
Posted by Zed1 at 5:22 AM No comments: