Final addition for this year...

Okay, folks - this'll be my final blogpost for this year. And it will be the final addition of units for my long-time Pre-Bardin uniform project (Pre-Bardin uniforms) for this year as well. If I have counted right, I've completed 167 figures, meaning a total of completed units of 43. This means, there's currently still more then 220 figures to go.

The row of 'Franco-Spanish' units continues with the Jager regiment: 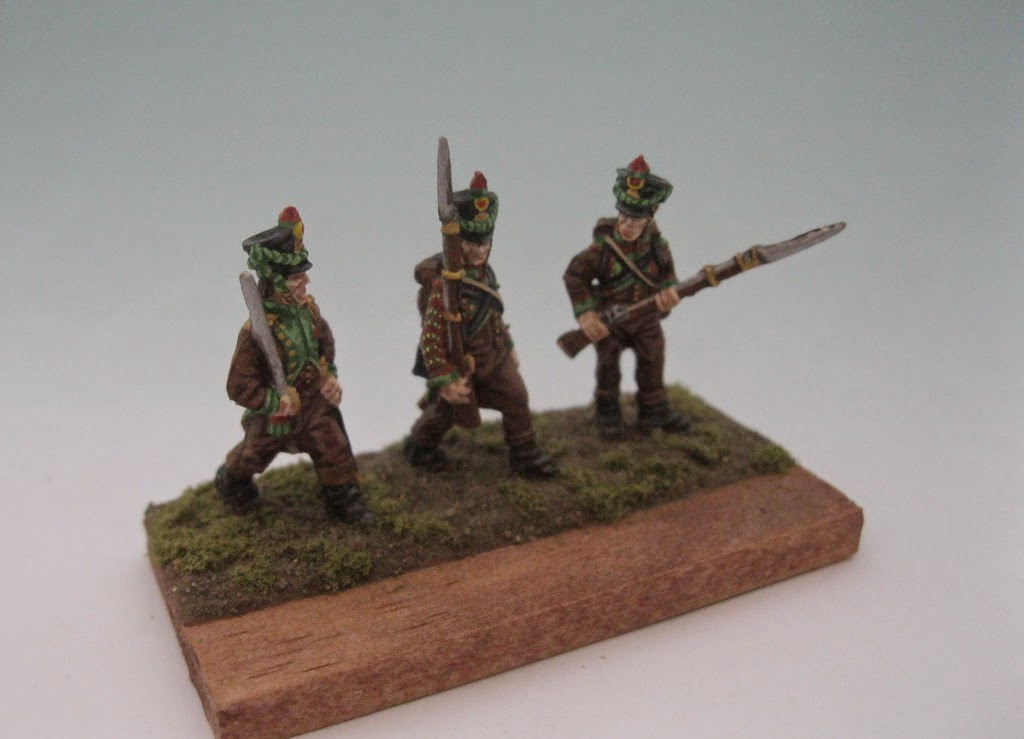 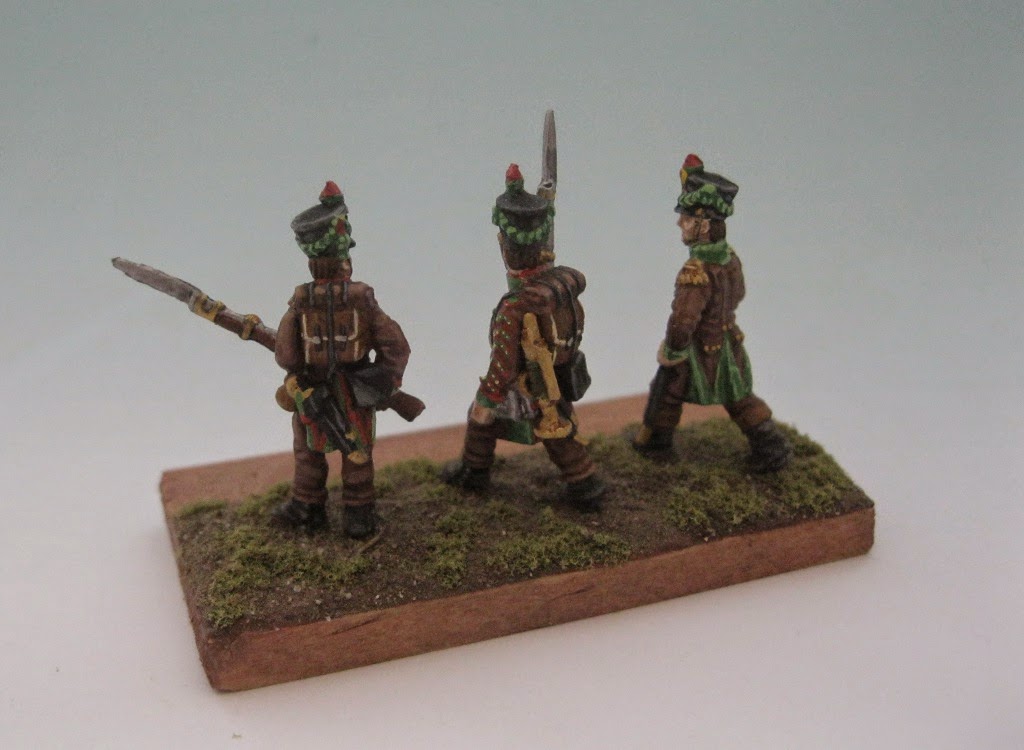 The Franco-Spaniards are one of the rare armies that have largely used brown as the basic uniform colour - which simply looks splendid among all these blue and white and red guys. Wait for the line regiments - they even look better then the Jagers.

The second display shows men from the 2nd light infantry regiment of the Kingdom of Holland. 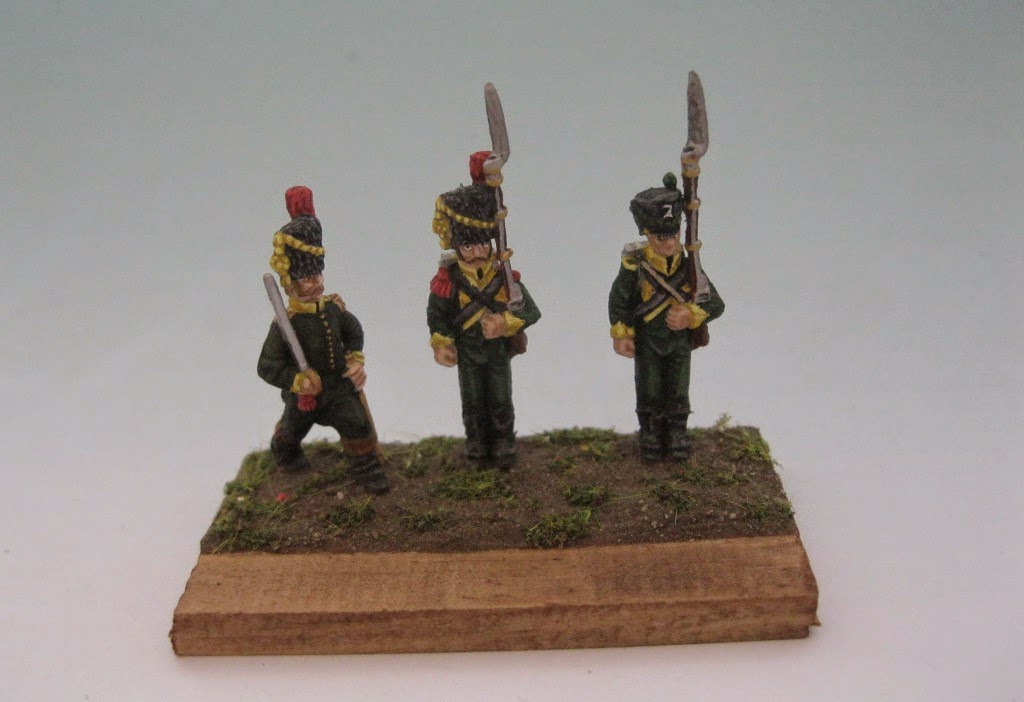 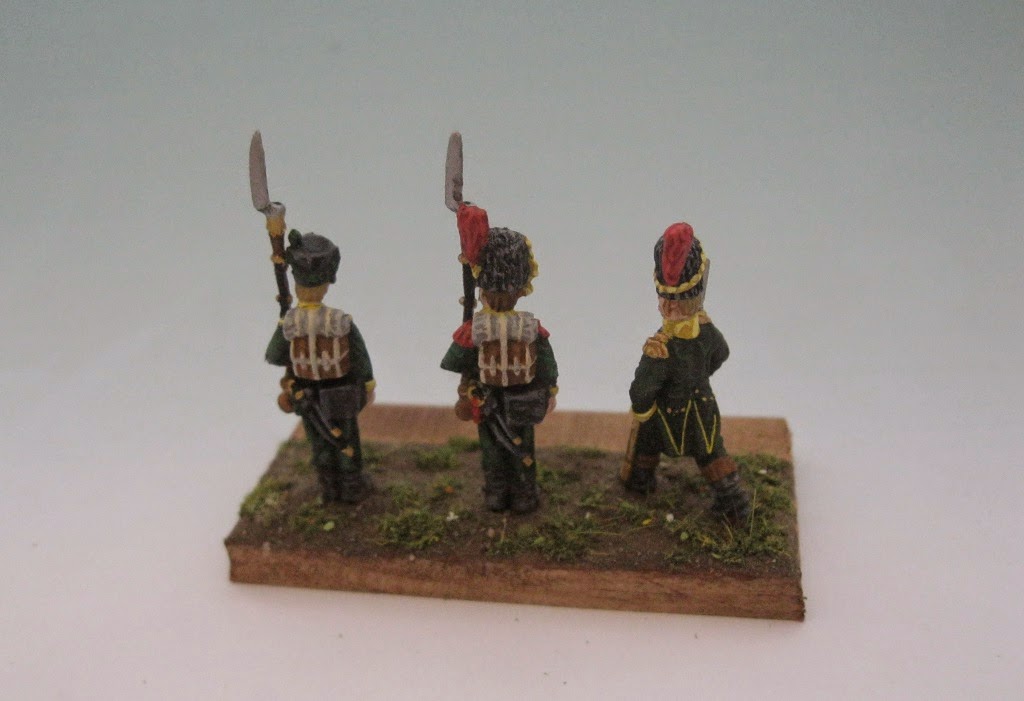 Although the Kingdom of Holland only existed for a small time until it was annexed by the French Empire, the uniforms of it's regiments changed various times and were often a wild mixture of different uniform patterns. These here are early uniforms, painted according to the Suhr pictures of 'Dutch troops in Hamburg'.
Even there, you can see light infantrymen of the two regiments wearing merely a dozend of different uniform mixtures - really embarassing. But according to the carabinier pictures and the main analogies of the other plates, this should be what the uniforms should have looked like 'by the book'.
As there was no picture of a drummer for this unit whatsoever, I had to go without it.

The final display for today shows the Bataillon Septinsulaire: 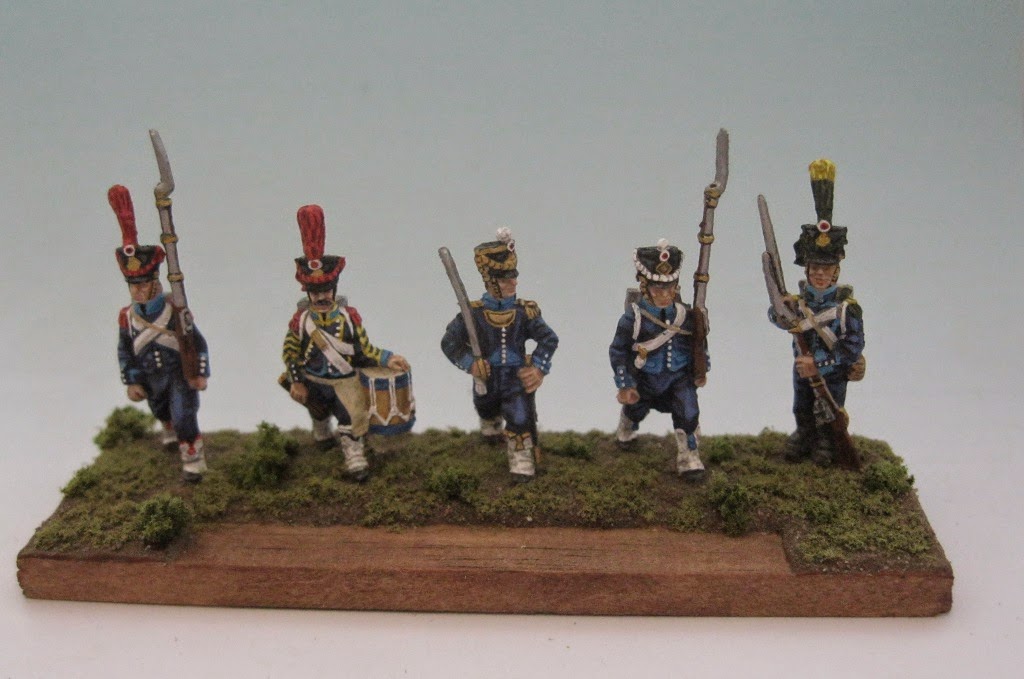 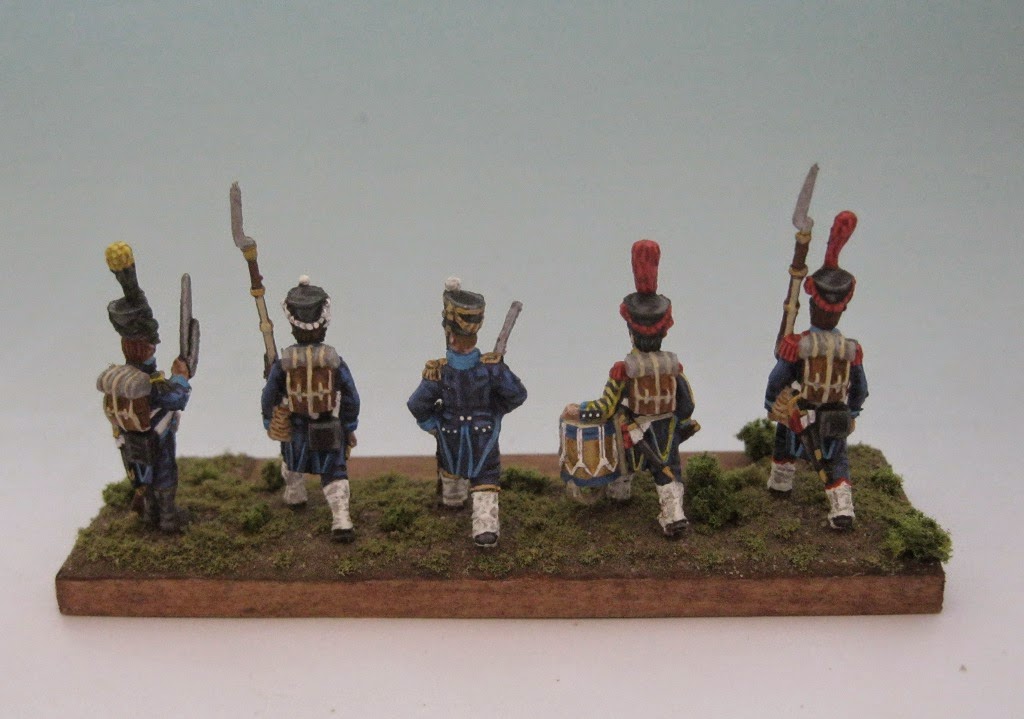 This unit was raised in 1807 and mainly consisted of Greeks and Albanians. In fact, the different descriptions of this unit leave a lot of place for speculation regarding some details of the uniform.
The uniform of the fusilier is painted in accordance to a Knoetel page and - due to the one-buttonrow-jacket - seems to represent the 'petit tenue' (simple uniform) although it goes together with white gaiters. The gaiters are the next problem - looking at all pictures available for this unit, you find all possible combinations. There are white gaiters, grey gaiters, with or without tassels - and even Hessian boots. Regarding the jackets, you find light blue vests, dark blue vests with or without light blue trims. Even for cuffs&collars there is no such thing as a 'real McCoy', especially because many pictures do not define an exact date for a specific uniform combination. So in this case, 100% accuracy cannot be granted - I can only say that these uniforms were worn according to my sources, but there's no guarantee that they were worn in this exact combination at the same time.

So who said that painting Napoleonics is soooo simple because you have all the uniforms exactly documented, eh?

In regard to my blog, it was pretty lame, wasn't it? Only 13 postings, which is half of what I posted the year before. In regard to productivity, I have done far more then in 2013 - I have finished 131 figures this year, made three vignettes and a diorama. Which was, altogether, pretty much work. And although I have enjoyed it very much, I will certainly not make that much diorama stuff in 2014 for sure.

In regard to private circumstances, 2014 was interesting, fascinating and sometimes fun. On the other hand, it was a year of much trouble in all the wrong places, with many failures and hassles. But I'm pretty sure that 2015 will be a better year for me - that's damn sure. ;-)


So cheers, byebye and have a nice, great, joyful and cheerful new year 2015!

I'm currently concentrating on making some progress in my pre-Bardin uniform project (http://zedsnappies.blogspot.de/2011/07/project-all-varieties-of-pre-1812.html).
The last few weeks, I made some research for uniforms of Spanish regiments that were recruited under the rule of Napoleons' brother Joseph. They also wore the standard-French-style uniform and there were a dozend of different regiments - which on the one hand raised the number of still-to-be-painted figures, but on the other hand will enrich my figure portfolio with a lot of brown uniforms. 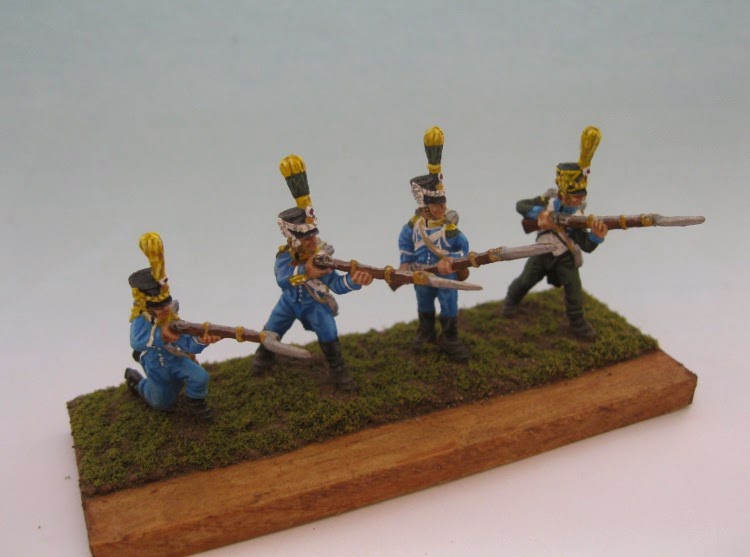 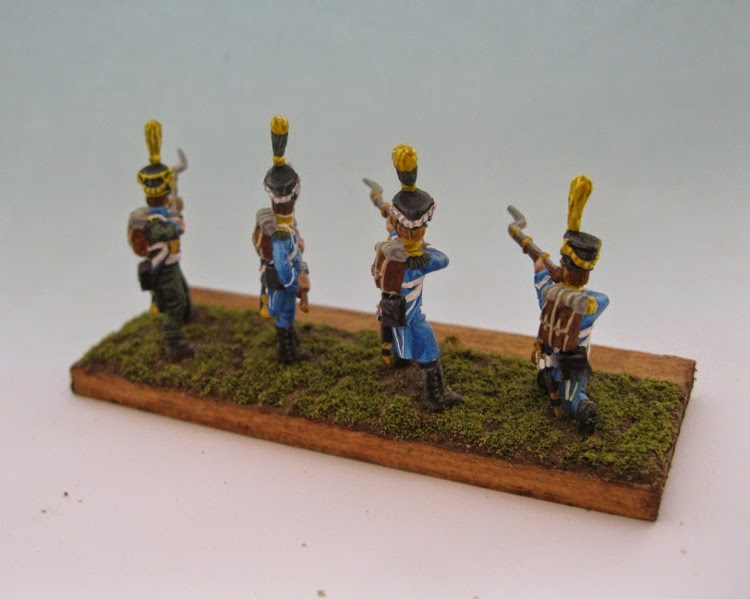 First in line are the Voltigeurs for the 2nd foreign regiment (Isembourg) who wore, over a period of eight years, at least four different uniform designs. With the grenadiers being already done, I have the chasseurs and command still remaining to be painted. 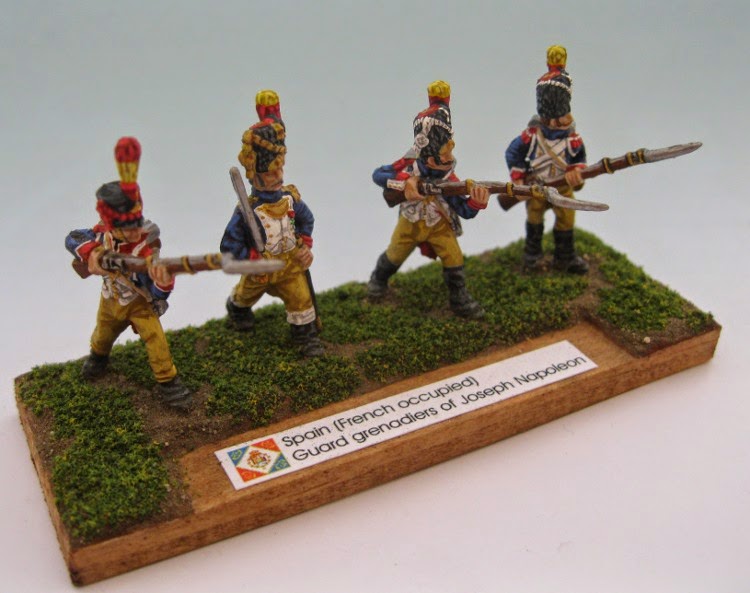 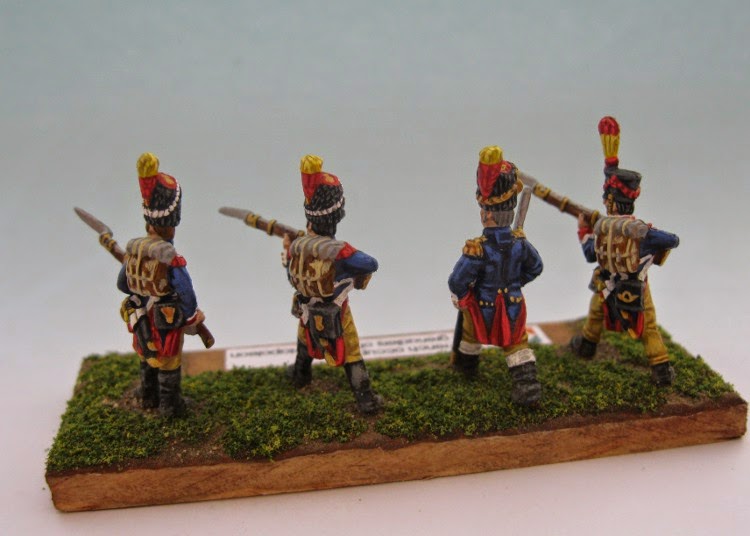 First unit in the next line of 'Spaniards under French command' are the guards of Joseph Napoleon. The first image that I had seen about this unit came from the Vinkhuizen collection, but there are rare pictures of these men on old paintings etc. as well - you just have to search long enough. 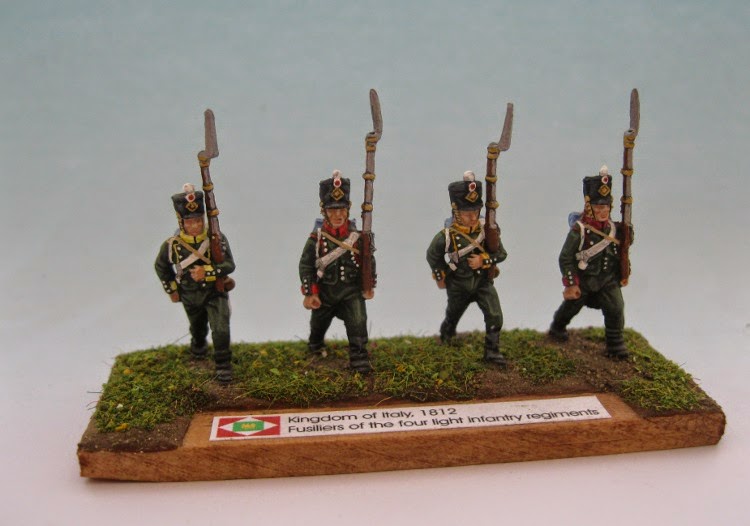 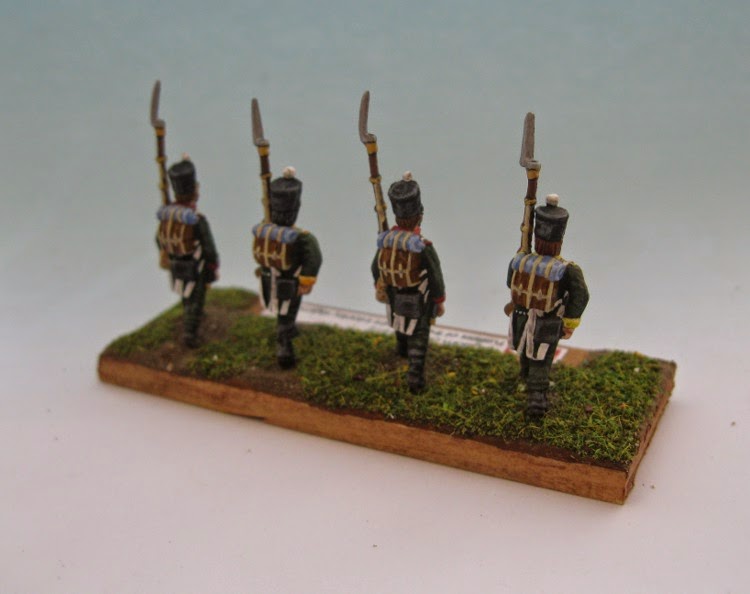 One unit I wanted to start with for a long time are these guys - fusiliers of the four light infantry regiments of the kingdom of Italy. Basic time for these guys is 1812.

While I'm posting this, I have a small display of Kingdom of Holland 2nd light infantry nearly finished. I have also painted 4 of 5 figures of the Bataillon Septinsulaire. In addition, I started converting figures for the 7 Spanish (occupied) line infantry regiments and the 1812 Spanish (occupied) Jagers. First figure is ready for the French 32nd line infantry regiment (white uniforms) - more then 20 figures altogether.

This may sound like a 'big project boost' - but keeping in mind that there's still more then 200 figures 'to go', it's merely one small leap forward.