So that's what we wish each other in the last hours before the new year starts and the old one passes into the history files.

For me, it has been a very mixed year with high rises, very deep falls, interesting opportunities and many good hobby sessions, meetings with forum collegues (live or via chat) and again with the experience that a good, strong family can compensate a lot if life goes odd.

A picture of the mignight fireworks in the skies above Dortmund, shot from higher altitude.
This picture is some years old, but it still stands representative for how all cities of the Ruhrgebiet, including the one I live in, will look like at 0:00 tonight. ;-)
Thanks to you all for coming to this place! I wish all my followers, my collegues-in-painting, all friends and family a nice, happy and healthy year 2012!
And while I'm preparing tonights' party, I'm already minding about the next things on my painting list... ;-)
Posted by Zed1 at 2:38 AM 4 comments:

Welcome to the 100st visitor from Spain! Thank you for coming into this small place which is filled with my humble work (at the time I place this posting, it's actually 99 Spanish visitors on the counter, but on the one hand I'm gonna be offline for the rest of the day and on the other hand I intend to 'close the year' in some way).
Well – I've prepared something when I recognized that the amount of Spanish visitors was on the rise. I also wanted to base the whole group of figures, started with another couple of figures – and then, again, the world went upside down.
My oldest son brought a pneumonia back from Kindergarten. He suffered badly for a few days but, as children mostly do, god bless them, he felt better quickly. Not so did I – everything was prepared for a nice, calm christmas with family and friends, but instead it was two days laying on couch and bed for me. After having some days of rest and lots of antibiotics, I'm feeling better again, which does not mean that I again feel fine or fit.
So basing the whole group didn't happen yet. Another thing that I have to do later.
But it's not the only figure group that requires basing until next FIGZ...
Now here they are, Spanish infantry... 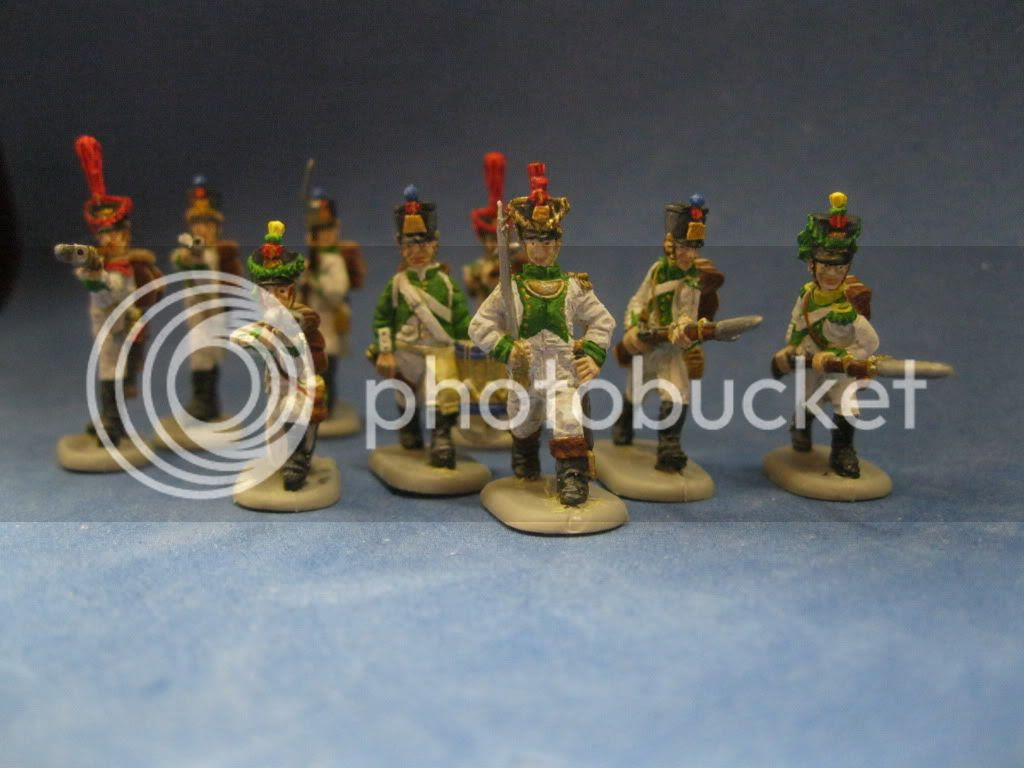 ...but wait? What are they? Aren't that French uniforms? Aren't they in white and green? 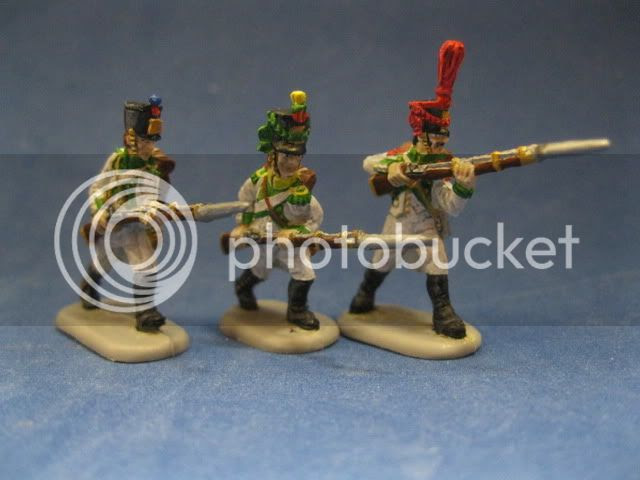 Yes, they are. It's a representation of the regiment Joseph Napoleon.
No, this is no offense. And yes, I like Spain very much. Been there. ;-)
Let me explain what happened. As I posted somewhere before, I'm doing a long-term project on Bennos' forum: http://bennosfiguresforum.com/viewtopic.php?f=11&t=7969. This project is all about painting every variety of the typical pre-Bardin French uniform. This uniform style was worn by armies all over Europe, not only by the French themselves. Spain, Italy, eastern European and German states – the number of possible varieties is enormous. So technically, the HaT set 1808-1812 French Line Infantry includes more than 150 units from all over Europe... it's all in your brush!
I wanted to come forward with this project, while still being able to present some '100 welcome' credit figures. That's not a problem for the French or the Italians, but for the Spanish... I started to find some adequate Napoleonic Spanish infantry, but the Odemars figures were not very convincing. HaT has not released their Spaniards yet, nor was I able to get a test shot from them.
Well – I made some research and stumbled accross the regiment Joseph Napoleon, recruited from Spanish prisoners of war, a unit with Spanish command language that saw service in various battles from Spain to Germany until 1813. You can read more about the regimental history here: http://en.wikipedia.org/wiki/Joseph_Napoleon%27s_Regiment_%28France%29
One could say that this is the only Spanish military unit that served in all major European war theatres until the end of 1813. You can place this unit in almost every major battle - very versatile for the wargamers, I think.
Apart from the usual headswaps that come along when you try to represent different regiments with this HaT set (for example the officer, the drummer, some of the fusiliers) I had to modify the shako plates. First I carved off the original plates and replaced them with new ones that I had carved out of my usual paper tissue/wood glue mixture.
I hope you all enjoy this little setup of figures!
Posted by Zed1 at 2:27 AM 2 comments:

I've managed to finish another conversion - see more in the update of my recent Wurttemberg heavy cavalry threat: http://zedsnappies.blogspot.com/2011/11/wurttemberg-mounted-grenadiers.html 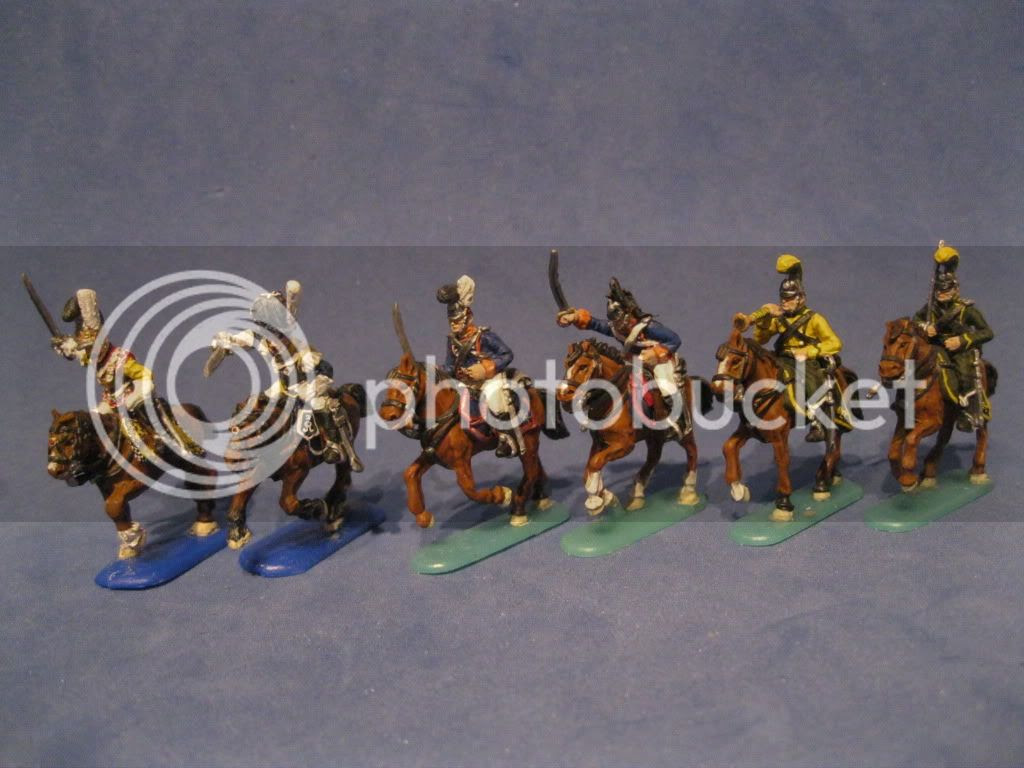 They already make up quite a nice troop, don't they?
Posted by Zed1 at 1:23 AM 2 comments:

Hey, my fellow visitors from down under - I did certainly not forget you!

Well - while doing this and that paintjob, I looked at my flagchart once in a while and for a long time, the new visitors from Australia came in in a constant, but rather small way. So when I saw that since number 90 almost every or at least every second day a new Australian visitor arrived, I began to panic.
I made a lot of research, but found nothing but generally of British look for the Napoleonic period. Which was, of course, only historically logic. But I refused to do some WW1/2 stuff, it's simply not my sort of business. 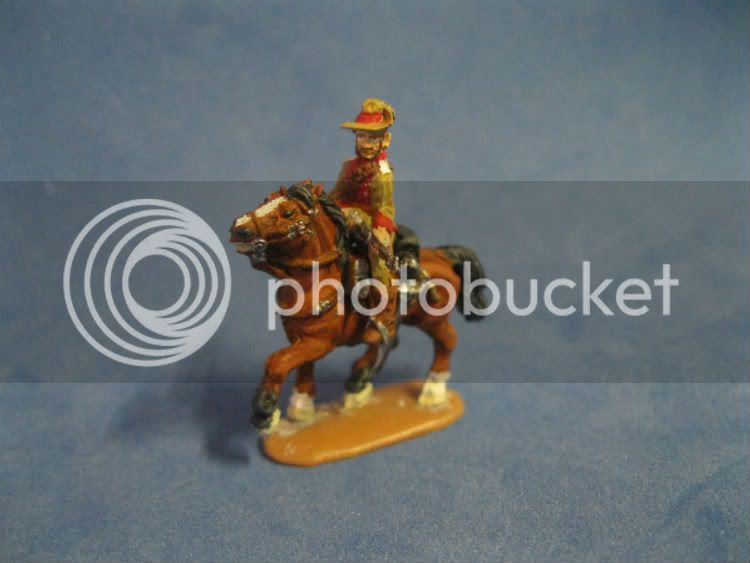 And here's the solution. This is my contribution for the 100st new visitor from Australia and all that came in before and after him/her. One of the famous Australian lancers that fought in the Boer campaign in South Africa. 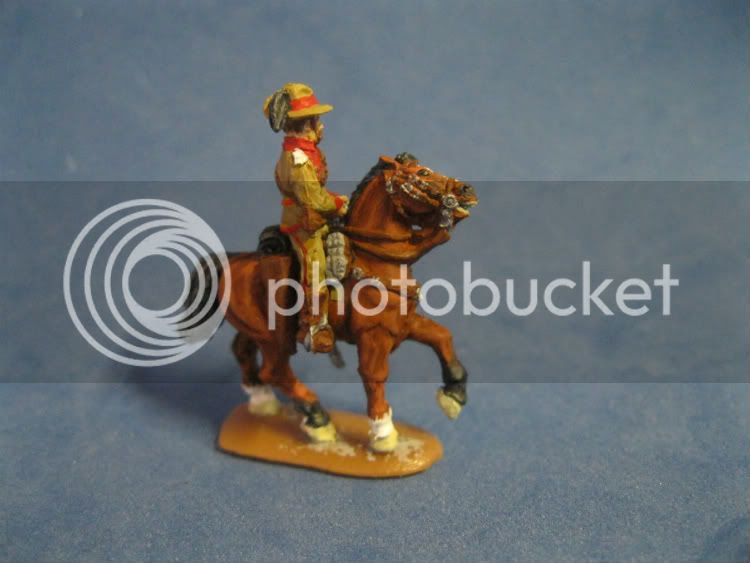 This set is from Strelets (http://www.plasticsoldierreview.com/Review.aspx?id=955). It contains a dozend of nicely done figures plus some really great horse poses. I like this set very much, although I will not paint all of them. I have currently chosen four figures and horses (the other riders are still in a 20% status) which will make up a nice and liveful little vignette later on.
Posted by Zed1 at 3:13 AM 3 comments: