Let's face it – the year is over and done. Here are the holidays and in a few days, 2016 is history. On political and global level, it was a year certainly not being of the best sort. We saw a lot of good artists die and go, we had almost every day a terror attack somewhere on this planet and, after all, never in past-world-war history, there have so many people on the run worldwide. So let's keep in mind to try making this world a better place for us all should be our intention for 2017, everybody on his/her level of abilities.

And to the hobbyists: keep on painting! 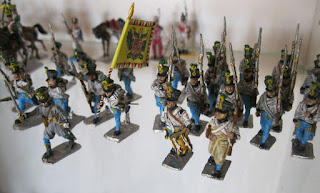 But away with that. As always, at the end of a year I'm doing an inspection of my 'painting performance' which was, as always, not as high as I would have wanted. Here's the original plan was:

Okay. The Baden Jagers were, together with a lot of Baden fusiliers, my xmas present. So, finally, I can start with them next year. The checklist doesn't look that impressive, but I've done a whole lot of other things instead:
In total, that's 111 completed figures plus a tank and 10 figures still on my desk, being in an different states of painting. Taken into account that the building and painting time for the SU100 was equaling the painting time for a row of horses, my performance was slightly above that of 2015. Which is, once after all, a surprise for me because I thought I had done less then that. Plus: I had lots of fun painting other things then Napoleonics. Sorry to say so, but it's just like that.

Now here's my personal Check-and-don't-make-it-once-again-as-alway-list for 2017:
If finances are good enough, there's a very special figure up to follow and I'm planning to buy some figures from Hagen in order to dress them up for representing 1812 US-american militia. 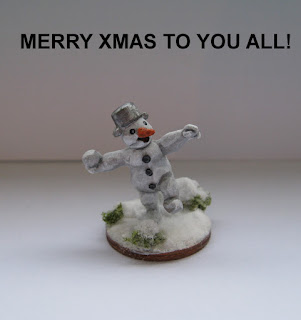 All the best to you and all your friends and families! Have a nice christmas time, lots of fun and some relaxing time.

(and don't let that little nasty snowman catch you ;-))

Thank you for following my blog in 2016, hope to see you here again also next year and many more years to come. I wish you all much success, health and fun for the forthcoming year 2017.

P.S.: that little snowy dude is one of the Xmas bonus figures from Schilling figures - thank you so much for it!

Well, well. Long on my list was the garde de Paris.

As First Consul, Napoleon Bonaparte created the municipal guard of Paris in 1802. Originally, it consisted of two half-brigades, which became two regiments in 1804.
These regiments were recruited from former soldiers who aged at least 30, but still were under 40, measuring over 1.65 m and able to read and write. To apply, the men must have had five campaigns under their belt. They had to commit for at least ten years, and more prosaically, had to carry a leave signed by the military authorities. [source: French Wikipedia] 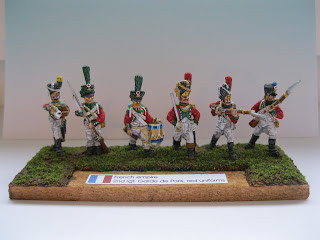 The first regiment wore green uniforms with red facings/lapels/collars - this is the second regiment, which wore colours vice versa. Which means, I have to paint another regiment, plus both in the white uniforms that were used in 1807 only.

There are some tricky things about these regiments when it comes to uniforms. On the one hand, you find various plates that leave you puzzled about when this or that part of the unit wore either shakos or bearskin hats. I finally decided to let the grenadiers appear with the bearskin no matter what, as well as I took in that bearskin-hat chasseur on the left side although I weren't able to research if they actually served in this uniform parallel or before the chasseur uniform with the simple green feathered shako was used. Parts of the unit seem only to have existed during the time when the garde de Paris was part of the Flanders campaign that led them to Kassel, later Hamburg. 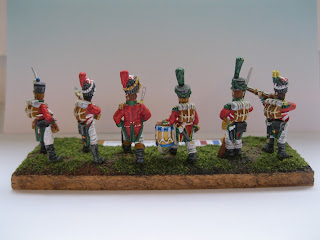 Next thing is the drummer uniform. On early regulation, drummers often wore a uniform in colours reversed to that of their units' common soldiers. But a uniform that was similar to the troopers' ones, only differing in golden/yellow pipings around cuffs, collars and breast, was also usual among French infantry units, although it is rather common for a use after 1807. Unfortunately, I found no evidence on what exactly was the case here. Uniform plates and paintings differ a lot, as if the painters also had the same troubles that I had. One time you see this, other times you see the other uniforms in use. Therefore, I decided to go with the golden piping version.

The garde de Paris, though being a municipal guard unit, saw lots of real battle. From October 1805 to February 1806, it served as an auxiliary force of the Grande Armée during the occupation of the Netherlands. The guards occupied Antwerp, Arnhem and Nijmegen, then moved forth to Hamburg. In 1807 they were vital part of the force that besieged Danzig. It also took part in the battle of Friedland, were it successfully stopped the approach of a ten times larger Russian force for nine hours.

In 1808, the unit was moved to Spain where it served until 1812 and participated in battles like Bailen and Burgos. It was dissolved due to an involvement of it's commanders in the Malet coup attempt of 1812 and later reinstalled as Imperial Guard of Paris in 1813.

I'd say that this is a unit of interest for wargaming scenarios. A municipal guard consisting of battle-hardened veterans.
Posted by Zed1 at 3:25 AM No comments:

Did I mention how sick I am about that lousy photo situation I'm in?
Yes, I know - I'm a lazy dog that has said how urgently he needs to build a good photobox, but I still didn't find the time to do so. Today, I thought that I would have excellent light conditions, so I made a few snapshots. And guess what? The result still doesn't convince me. Nevertheless, as a sign of life, I hereby present you something rather unusual. 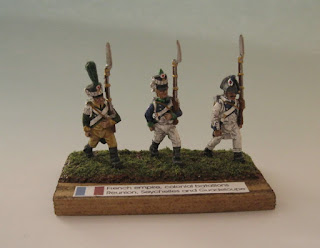 Although the French lost their American territories to the British, they still had a number of colonies, including islands in the Carribean sea and around Africa. I found it interesting to see that these batallions (which was what they were in numbers: regular batallions, strenghtened up with local militia) really had their own uniforms. So here's the first display, including example soldiers for the islands of Reunion, Seychelles and Guadeloupe. 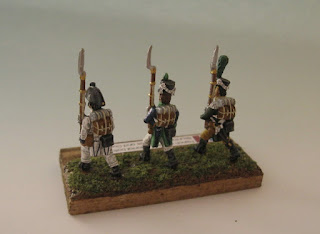 Personally, I like the Reunion uniform the most. It looks not even French at all - no blue and merely some white on it.

Right at the moment, I have the next bunch of Austrian-Hungarian fusiliers on my desk. I'm not too much in a hurry with them, because for completing the diorama that I have in mind, I will need a firing line of Baden infantry plus 'em Baden jagers. That will require some additional time and money that I currently don't have, so until then, it's proceeding with the many other figures that I already own. 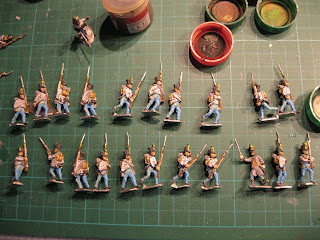