Okay. I'm more and more fed up with the appartment I'm living in when it comes up to photos.
I have no spot in here where I can make proper photos under normal daylight conditions.
I'm not satisfied at all - and I suppose that sooner or later I'll have to build a proper photobox.
In the following case, the contrasts on the white uniforms look harder on the picture then in reality. :-(

What I'm currently working on is the next part of early Kingdom of Holland infantry. 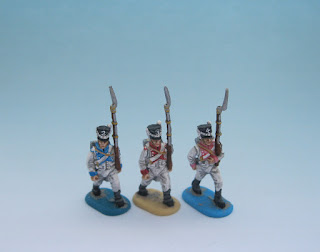 The first three of eight regimental figures are completed, I also have the belonging command and voltigeur figures also under construction. These figures are basically headswaps - voltigeur heads on fusilier bodies, plume cut off, pompom glued onto the right side and shako plate cut off. Which allows me to put the fusilier heads with re-glued plumes onto the voltigeur bodies - as a by-product, I can produce Italian light infantry voltigeurs and grenadiers. Win-win!