I just have to add another number of figures to my long-run pre-bardin uniform project.
This time, it's French sapper miners and sapper engineers - and yes, they didn't wear that metal armour all the time, especially not in garrison and on march. ;-) 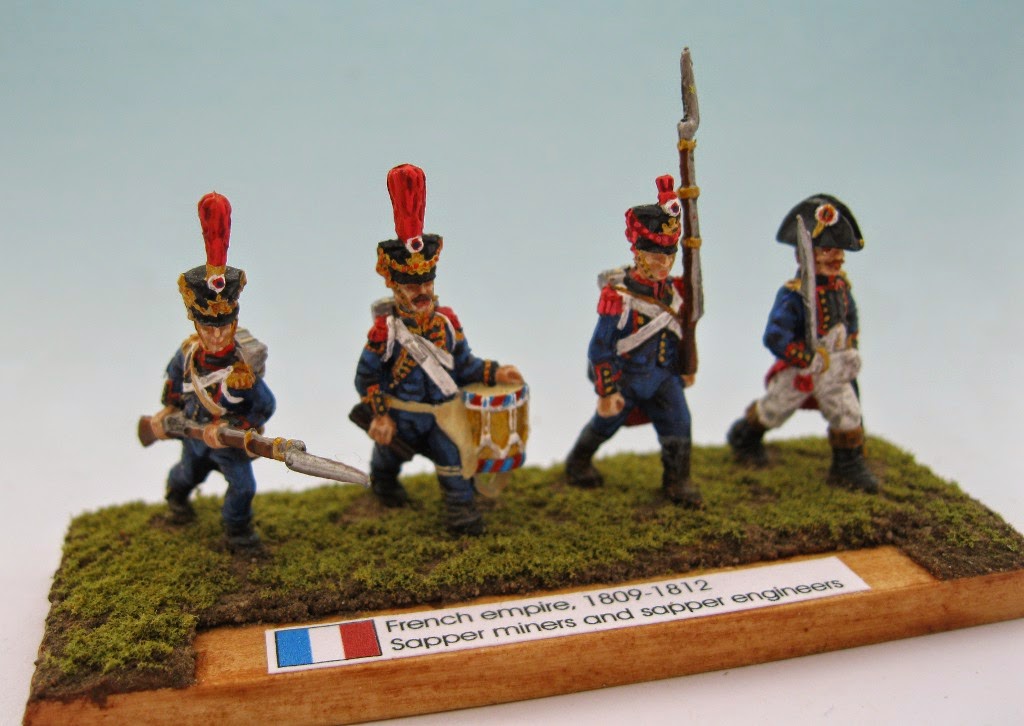 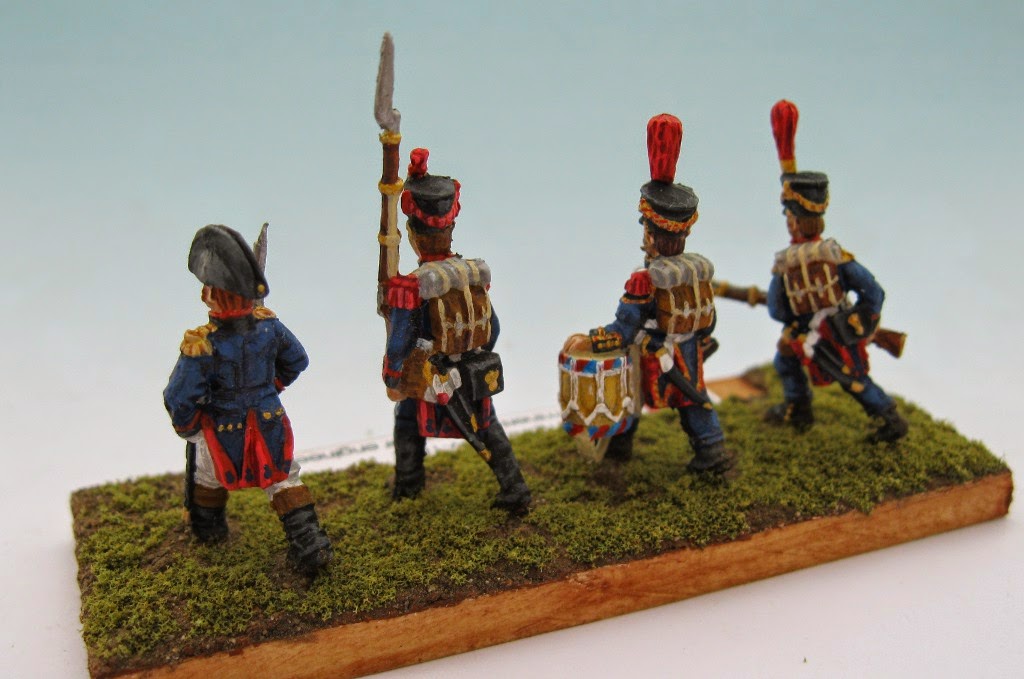 The most spectacular thing about it was, once again, the drummer. The rest is, well, almost blue.

Yesterday I used some quiet moments to modify the figures for completing the last missing Swiss regiment and the voltigeur display for the Isemburg regiment. The 3rd rgt. of Kingdom of Holland light infantry is already painted at 80% - so within the next weeks, I'll try to give this project a new push.

Maybe it's because I need more diversity on my desk. Too much Westphalians in the last few months, you know. I have mounted them on the diorama frame and the first round of ground painting and initial basic ground material installment has been done. Next will be all the grass, tree and flower implementation and then, it's done - the Westphalian diorama is going to be my multi-figure entry for the competition in Heiden, early October 2014. So for more pictures of it, I'm afraid you'll have to wait some more weeks.

Who watches the watchers? 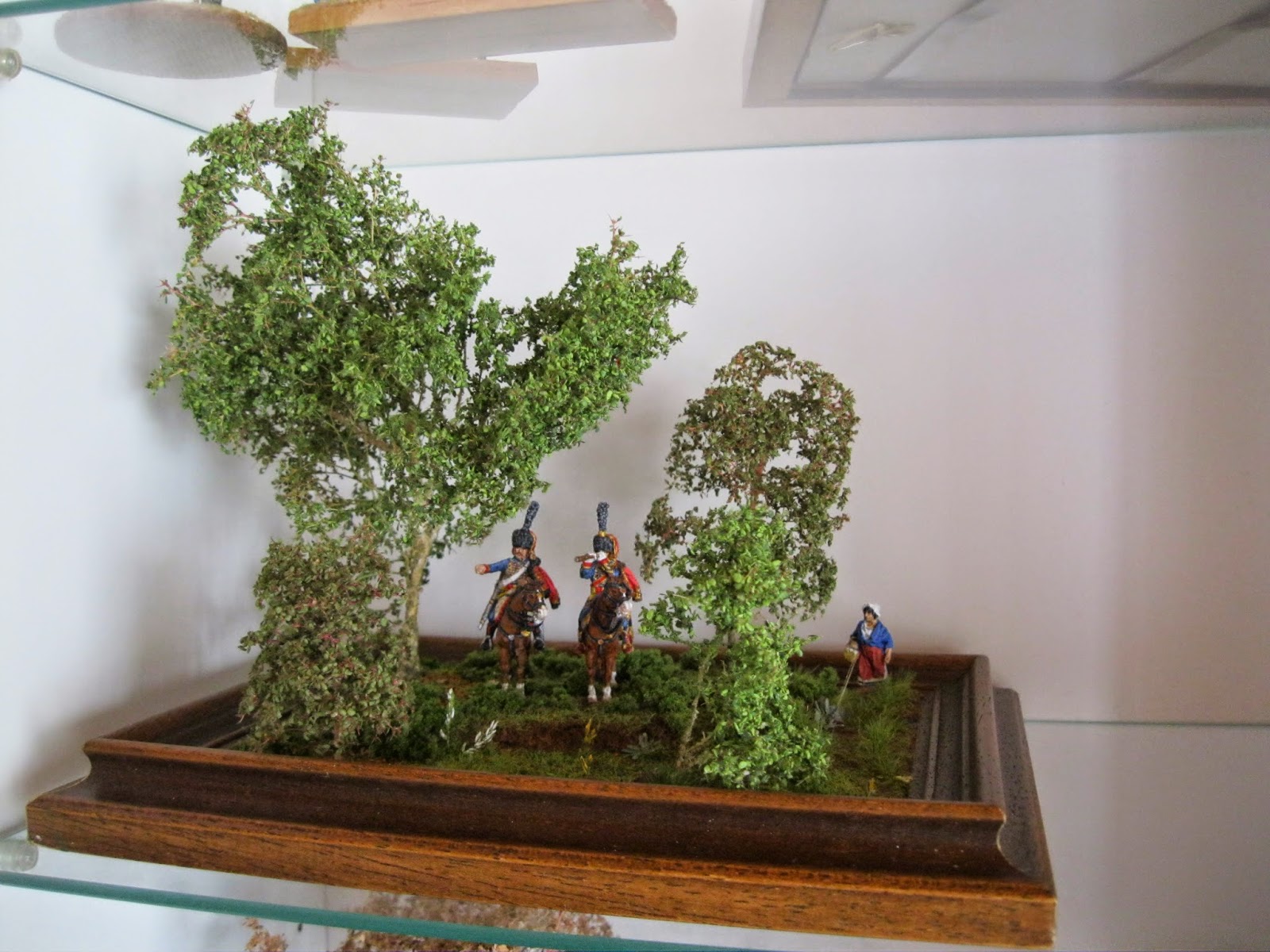 Hidden in the woods, two French hussar officers are investigatting the enemy positions - but they have an unexpected witness...

This little display was my multi figure entry for this years' FIGZ in Arnhem. I built it between December and March of this year, while having the hussars almost completed in my bin since October. The figures fell into my hands at FIGZ 2013 and within a second, I had exactly this scenery in my mind. As Conny said - if you have a picture in your head, go on and make it real. So I did.

At first, I bought a couple of old picture frames at the local thrift shop. Usually, I work with putty of different degrees of granularity. That works great for merely flat landscape, but in this case I wanted to raise up the middle part without having to wait weeks for the putty to dry out. So I decided to raise up the center part with lighter material. 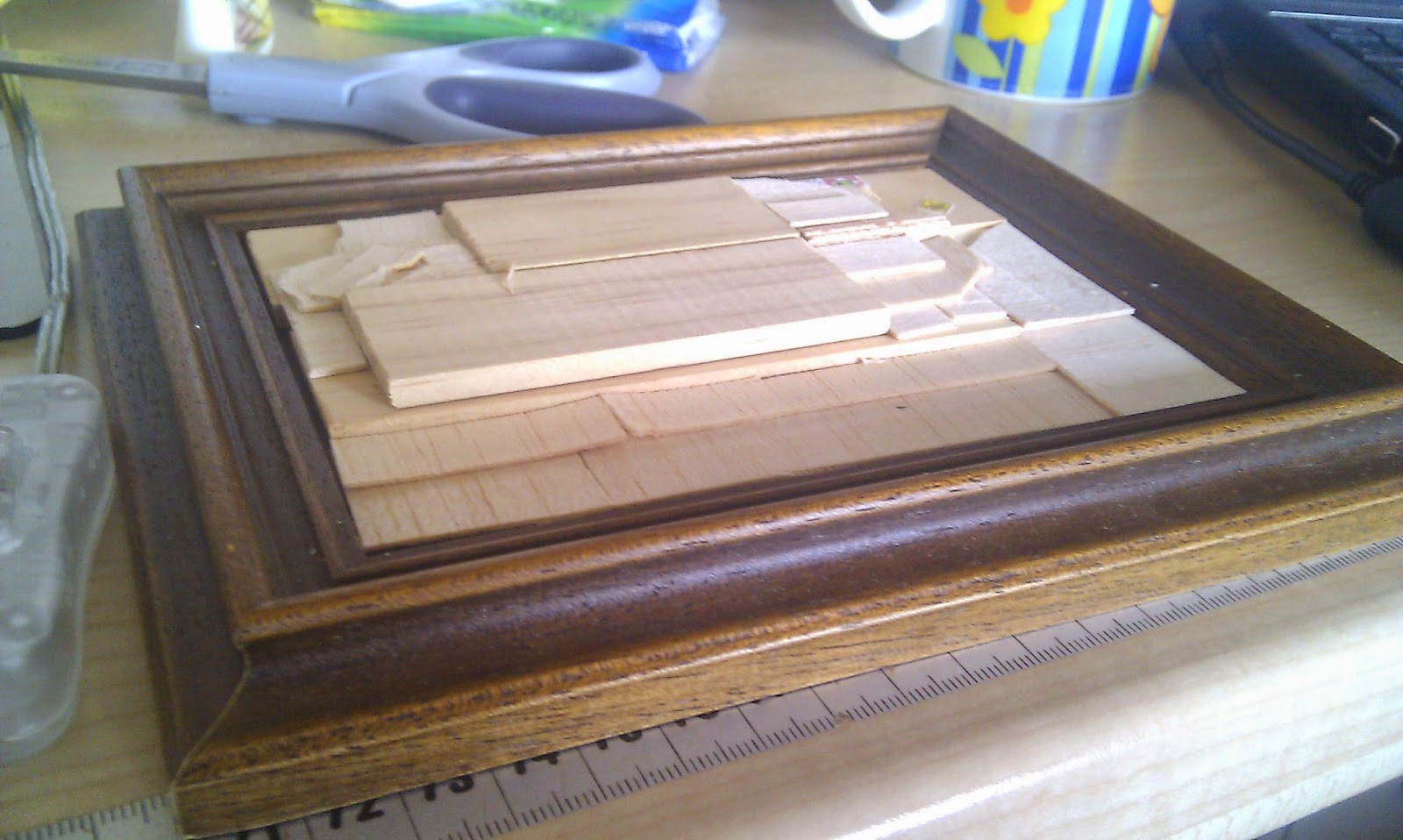 Old base plates, plywood - I glued together every little piece of wood that I found in my material box.
Honestly, I'm still a bloody beginner when it comes to diorama building. I read lots of internet articles and some books, but bringing all that stuff - which is mostly discribed for 1:35 scale - onto an own piece of wood is really a totally different story. 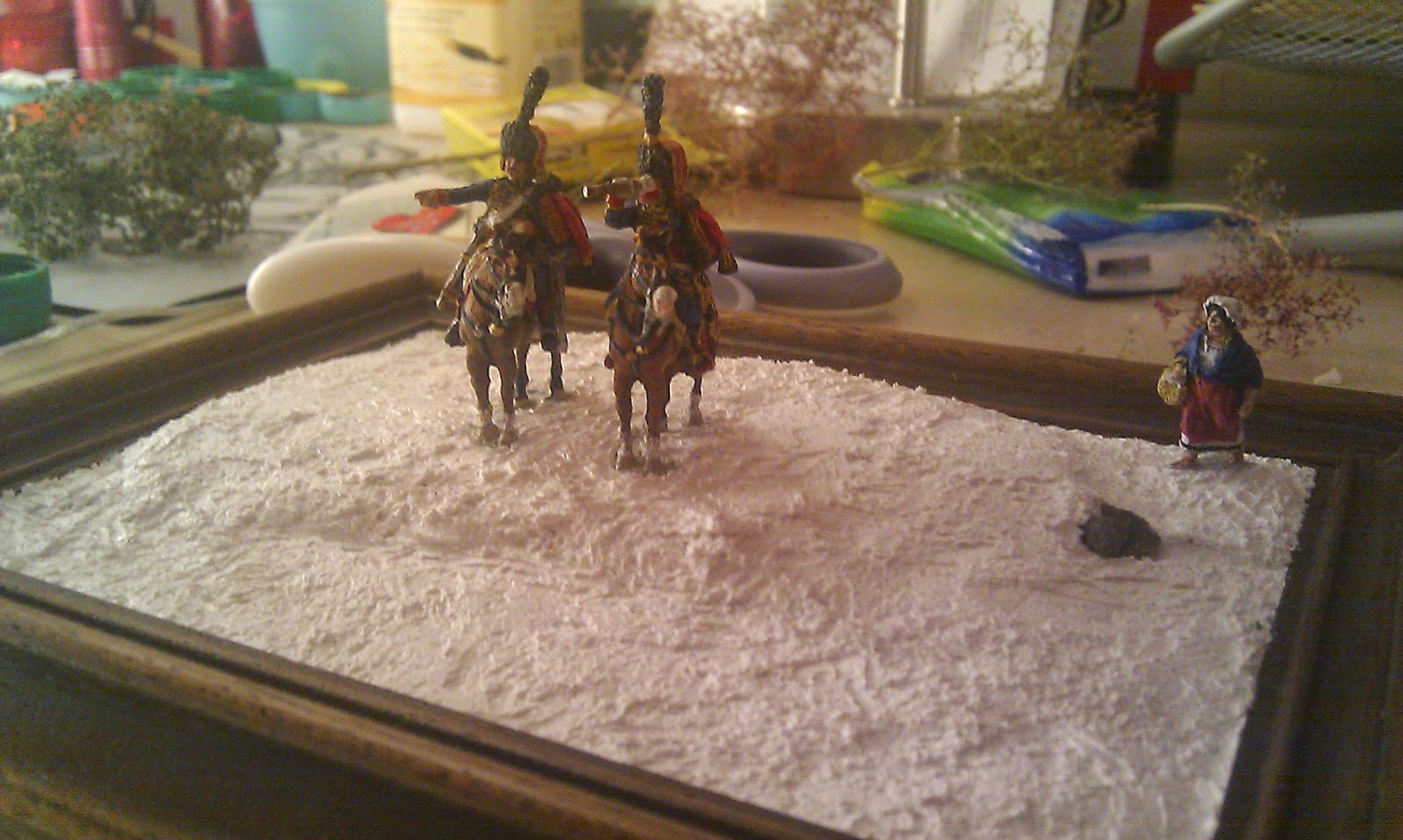 Next I brought the figures into position and put the putty on. The stones on the left side marked a small gap in which I decided to try to create a small well in order to find out if my wifes' transparent window colour sealer could be an adequate material for simulating water. 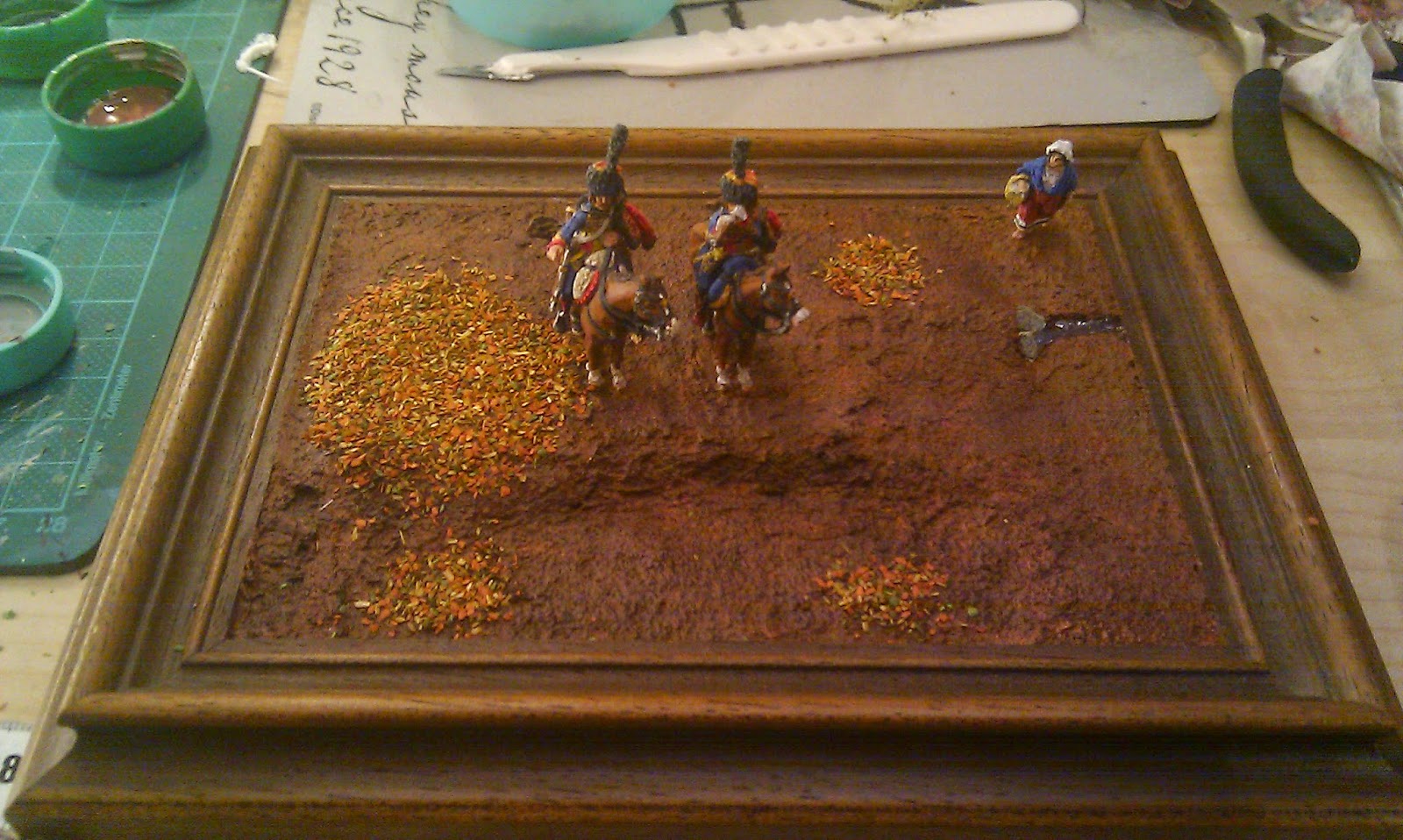 Well - it is not. Or perhaps it is, but the putty doesn't correspond to it very well. First, I painted the ground completely in a muddy brown and marked the position of the trees and bushes with some old autumn leaf laying around the tree trunk. The streambed was painted with dark brown. A day later, I filled in the window colour sealer, which is pretty liquid. First time, the liquid found a small gap between the putty and the frame and disappeared somewhere below. I sealed the gap and retried - this time the streambed putty cracked and, through the new gap, the liquid flew out once again. It took me three tries to get to something that merely looked like a stream, but as I weren't unable to get rid of the crack without removing larger parts of putty, I decided to camouflage this error with static grass just as if that grass was growing in the swampy bed of a little well. 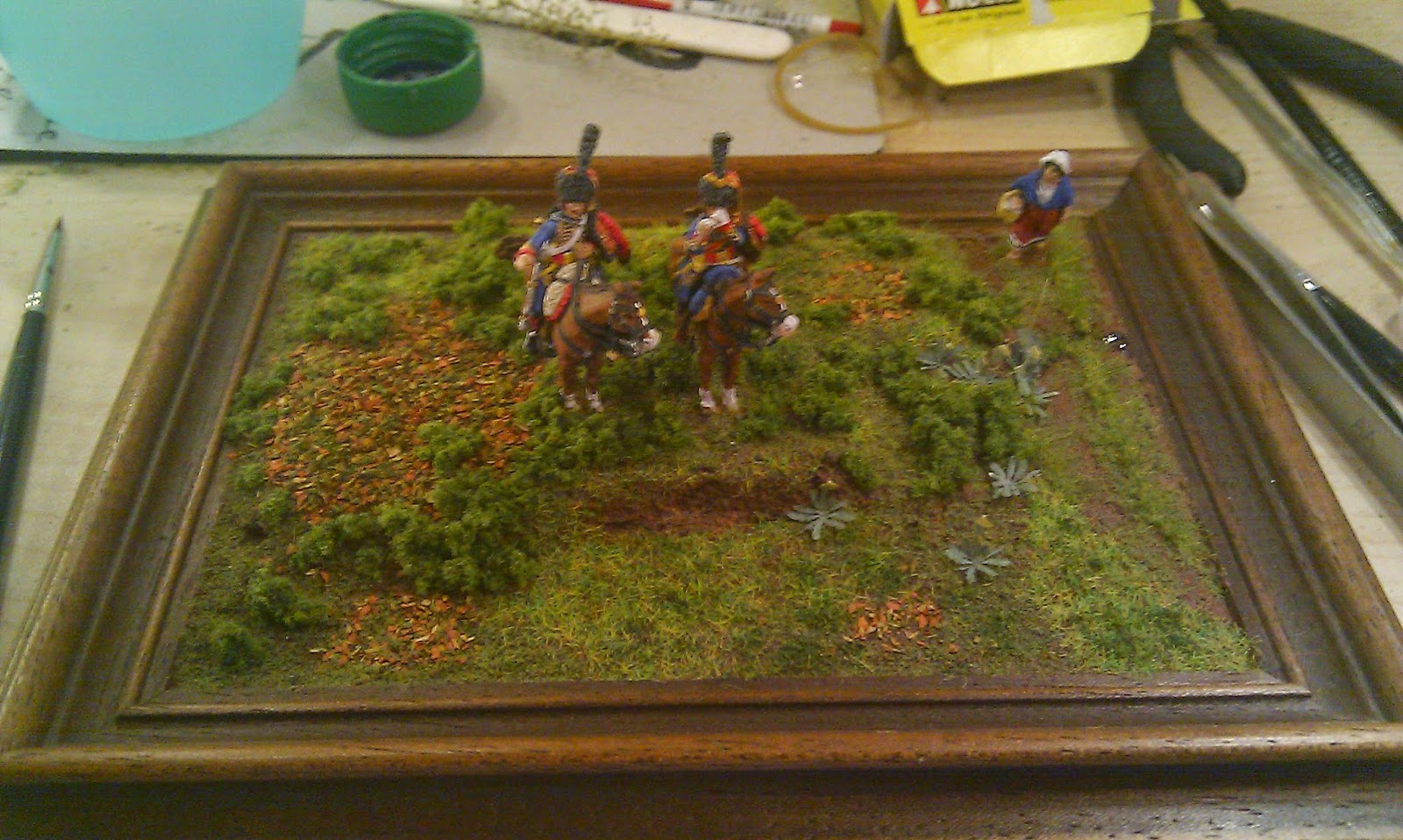 To bring in more green, I now added static grass, two sorts of fine flock and a rougher sort of flock in order to simulate small bushes. I also tried to implement 3d-prints of dandelion which normally is designed for 1/87 scale train modelling. As you can see, the leafs are really large in comparizon to real dandelion- imagine that for figures that are smaller in scale. Creepy, isn't it? Unfortunately, the shaft with the blossom on top looked much too much 2d. I finally decided to cut them off. 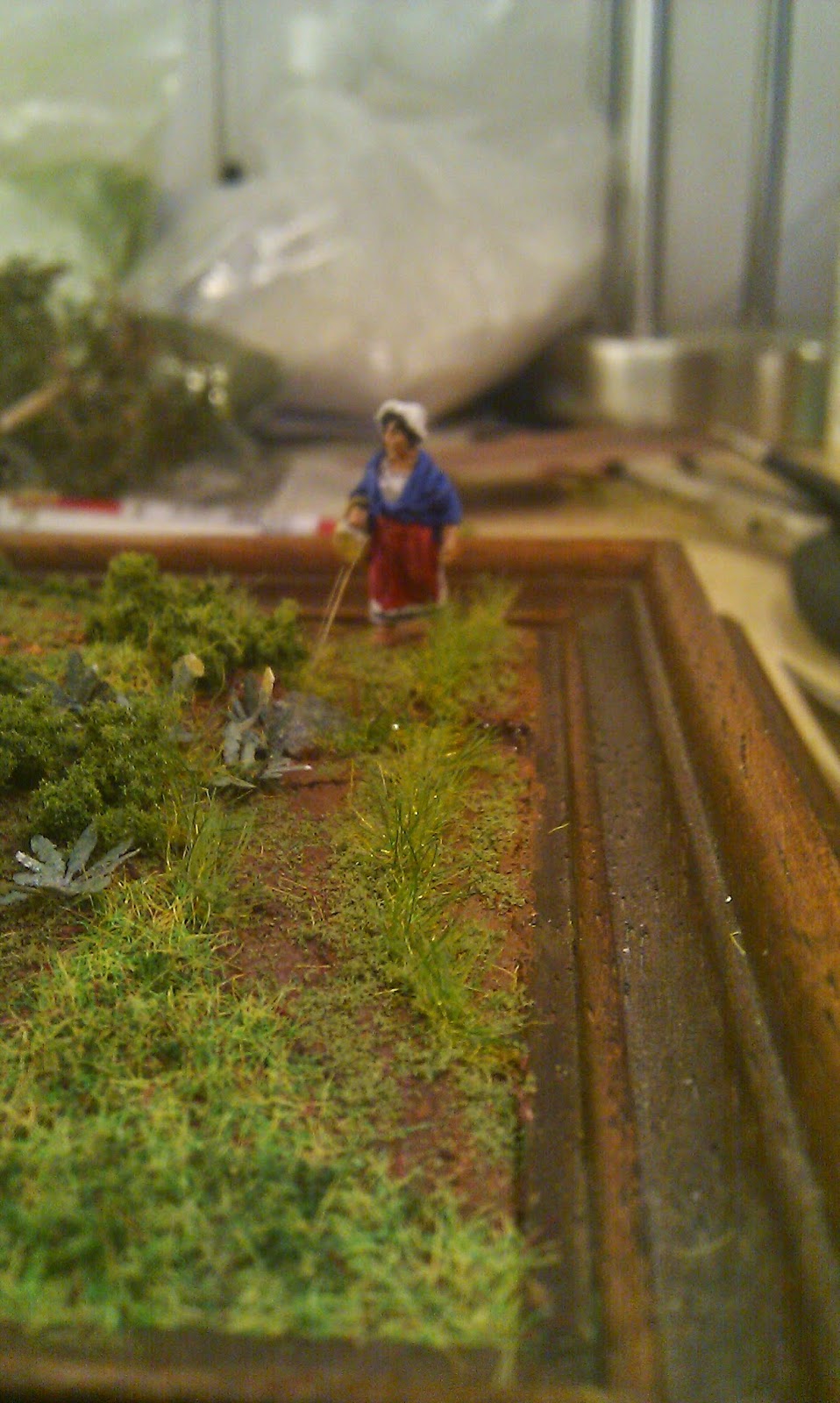 Here's a close-up of the path on which the woman is walking. The different sorts of static grass and the rest of the bushwork doesn't look too bad. :-) 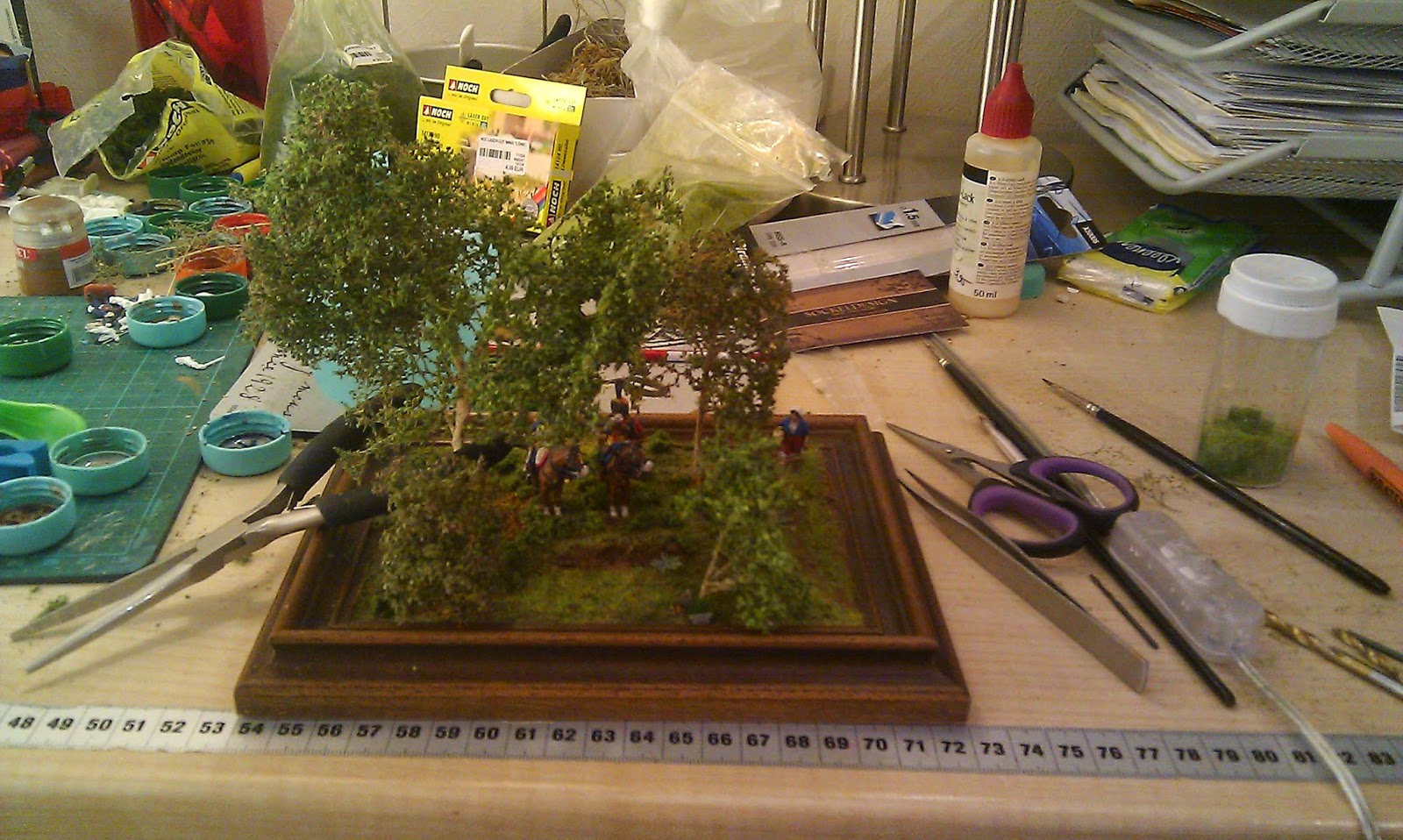 Next and almost final step: the trees. After I learned how to create my own trees by using really simple material, the tree and bushwork prototypes are now installed. A little drybrushing for the trunks, and here they are. Okay, I'm still not too satisfied with the trunk shapes, but for my first try, I was happy enough with the result. 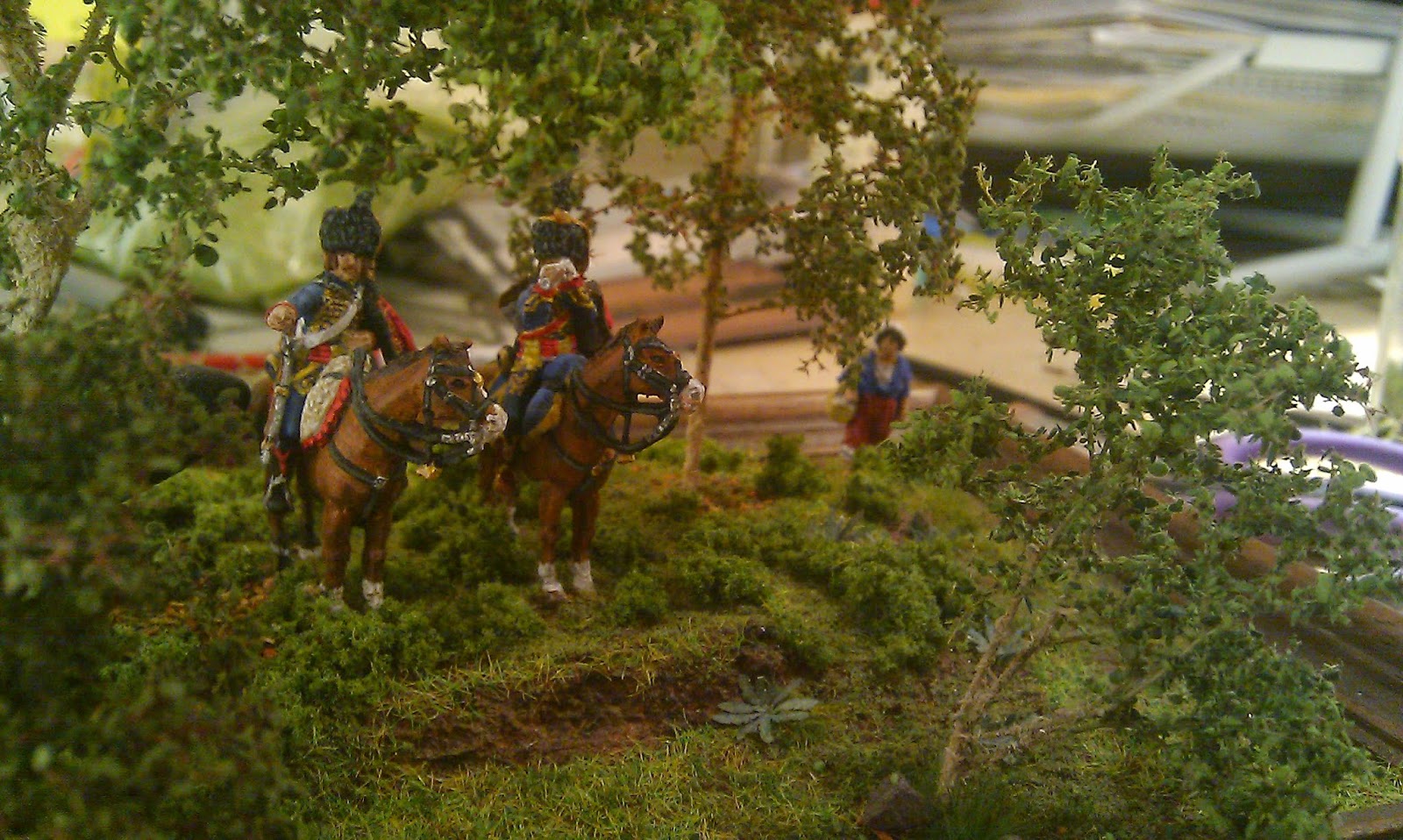 So here they are, standing in the wilderness, hidden under them trees, looking for the enemy. 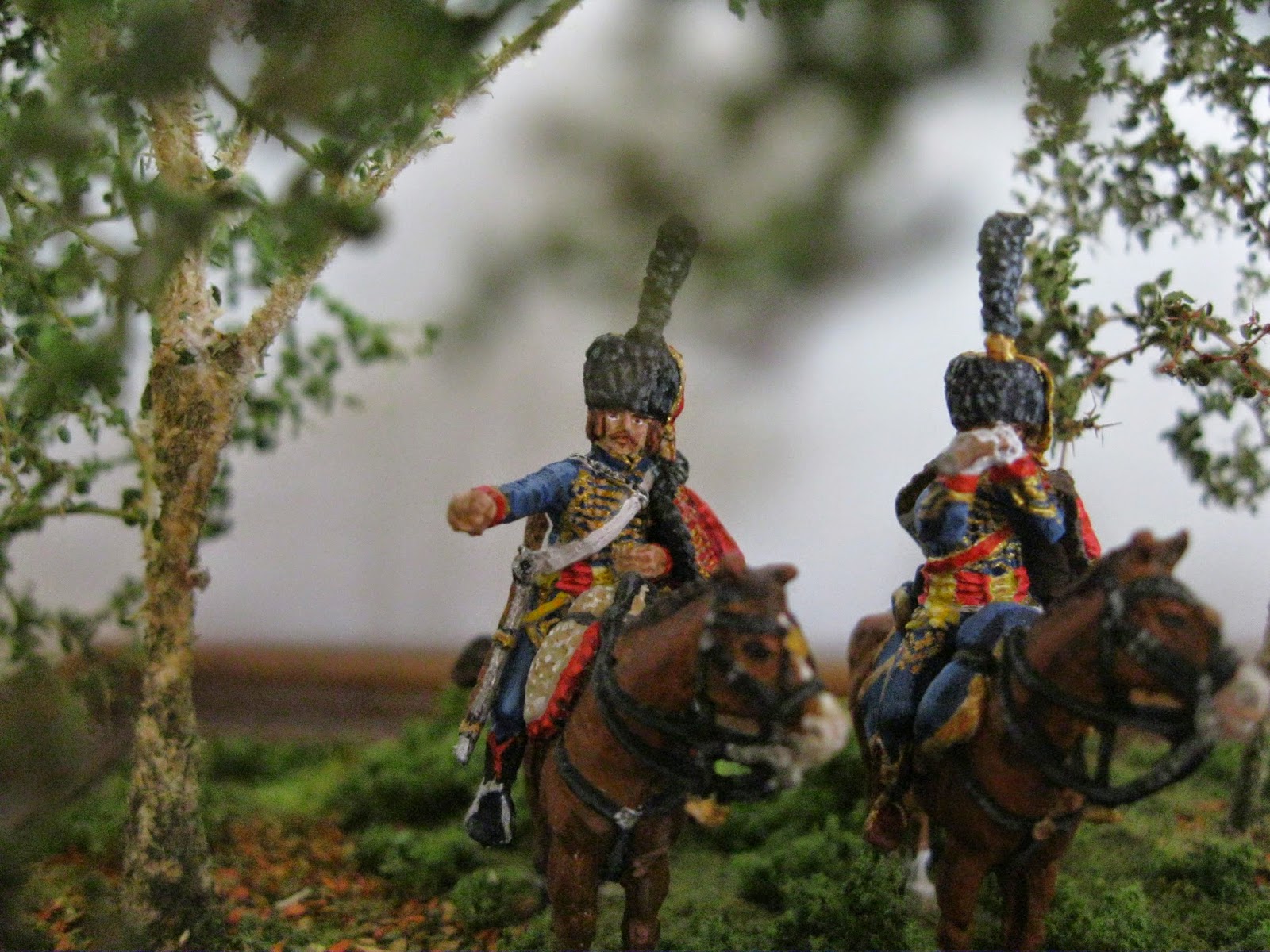 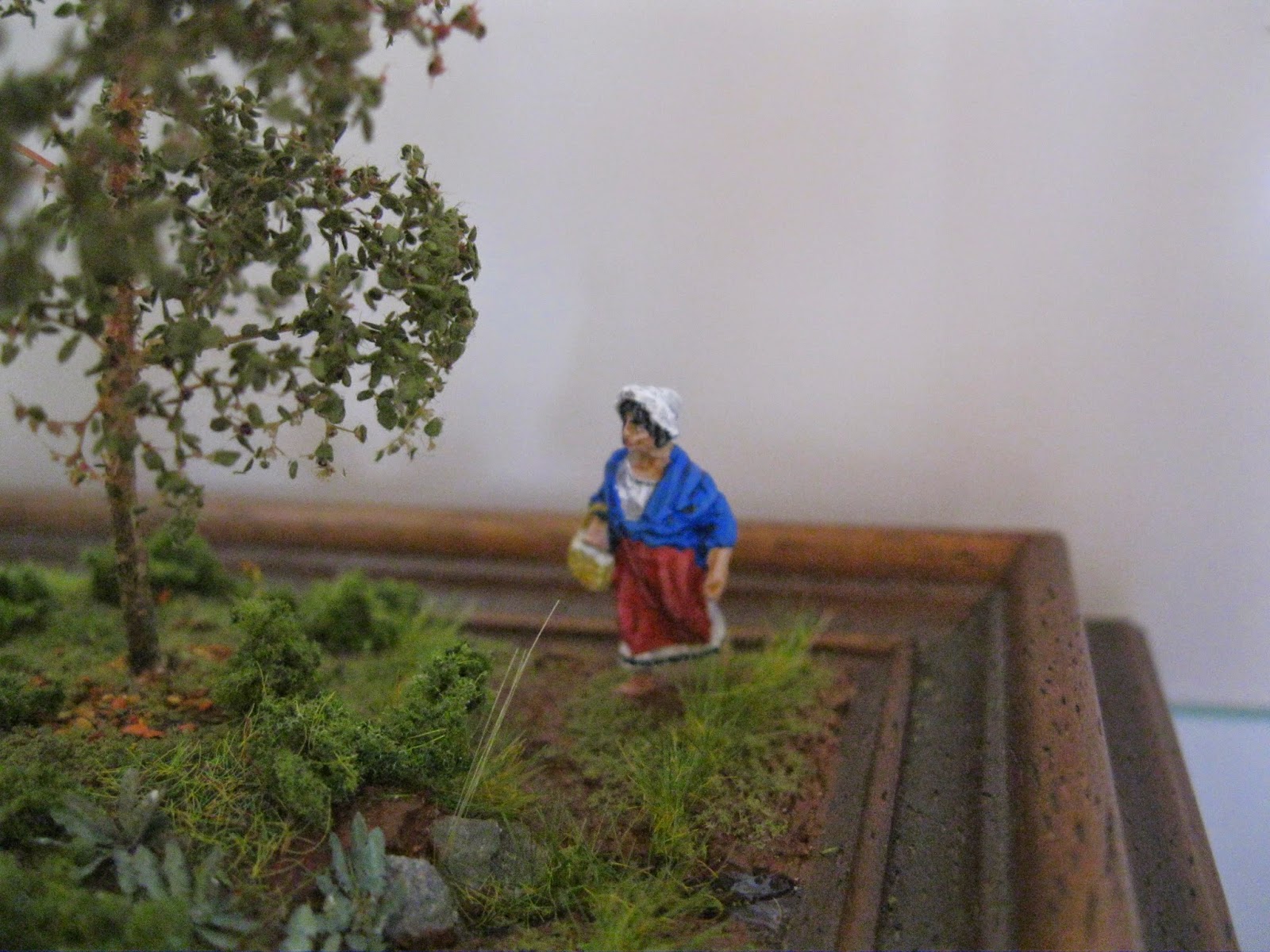 And here are some closeups of the figures. All are from ART Miniaturen (www.schmaeling.de) who produce really nicely detailed metal figures.
I'm really pleased with the result and I hope that you like it as well. Feels as if this won't be my last little diorama. :-)

Man - where has time gone to? Everytime another FIGZ takes place, it rushes by and - woooosh - that was it. It was, again, a really great day, meeting so many good folks from Bennos' forum. It's always a pleasure to meet you, folks!

Oh - and thanks to Remco and Benno. FIGZ might be a smaller event then others, but it's always nice to be there. I'm already looking forward for meeting you guys at the ISSC show in Heiden - and you can already count me in for FIGZ 2015.

This time I have not shot many photos. I was simply too busy chatting with people, looking around, shopping and enjoying the opportunity just to sit among other hobbyists and paint a figure.

A bit later that day, I met the great figure sculptor Francesco from www.franznap.com who showed me the prototypes of his forthcoming French horse artillery. This will be great sets with a great variety of poses. Another set soon to be produced will be Baden infantry - yes, no kidding. One of the biggest holes in the world of Napoleonic miniatures will finally be closed. I really can't wait to get my hands on them. :-D

I also got some great figures from Francesco - the beautiful Marins de la Garde and the brand new skirmishing Austrian hussars. Really fine sculpted stuff. I'm going to show them to you as soon as I'm done with painting them.

Oh - and of course there were competitions again. My multi figure dio (which will later be seen here because I made a work-in-progress photo report) lost. Again. But in fact, the competitors were too good again. I lost against a 16*16 men phalanx made by Konrad... 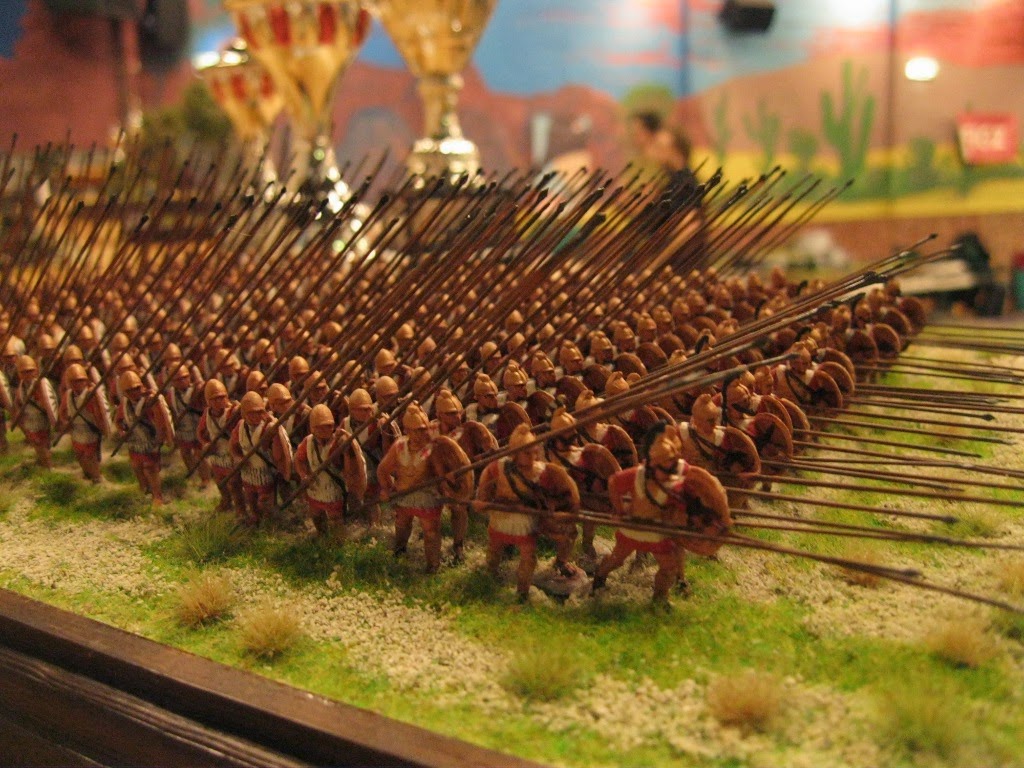 ...and the 'last stand' against an Orc army, created by Andreas (OldWolf) who, a day before, didn't even know if he should drive to Arnhem or not. 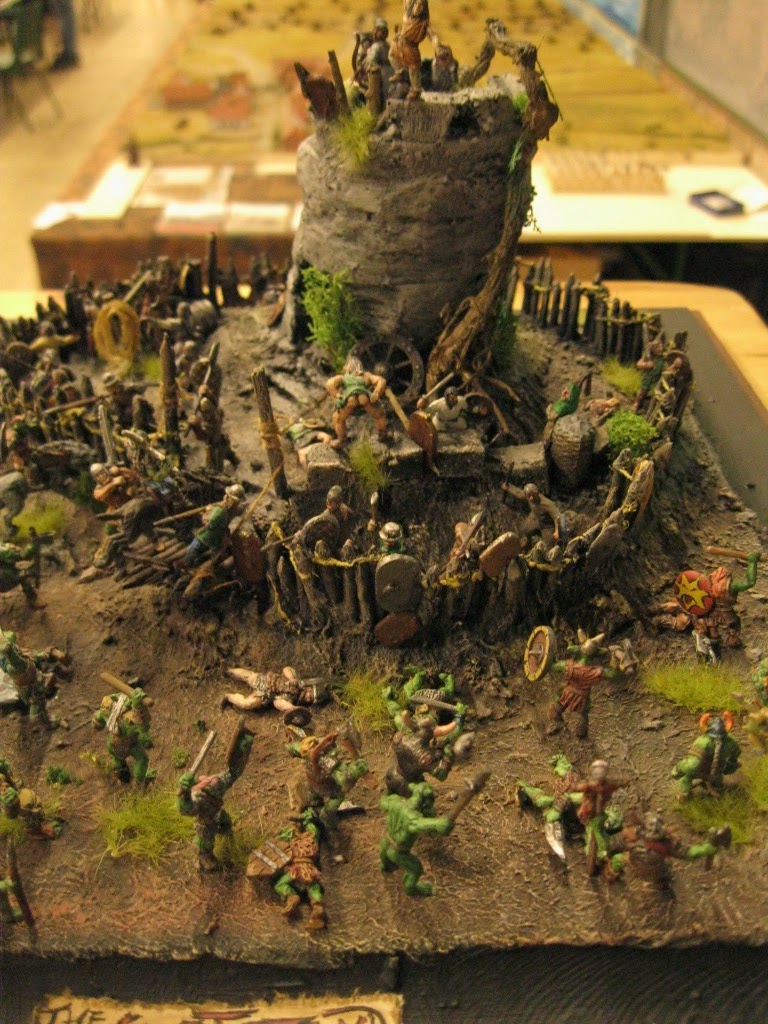 Congratulations to both of you! And congrats to all other competitors as well, there was some great work on the tables. Which was the reason why Das_Dirch won the first price in the single figure arena. I'm nevertheless, as always, happy that I had won a price again. Here's 2nd price, single figures: 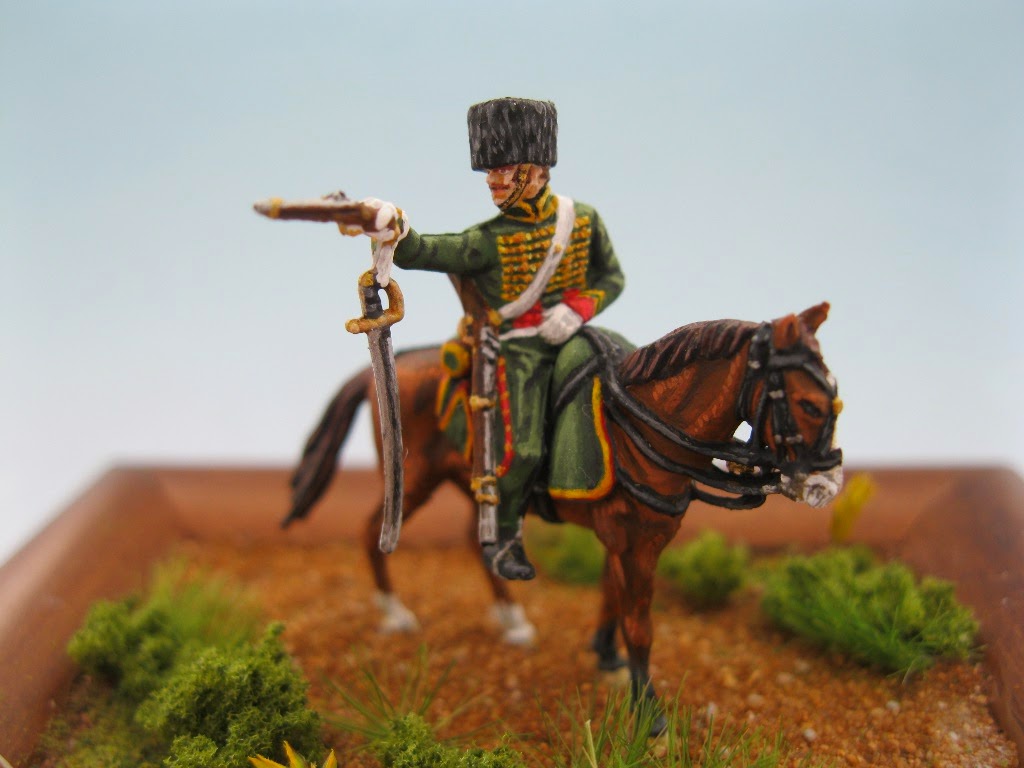 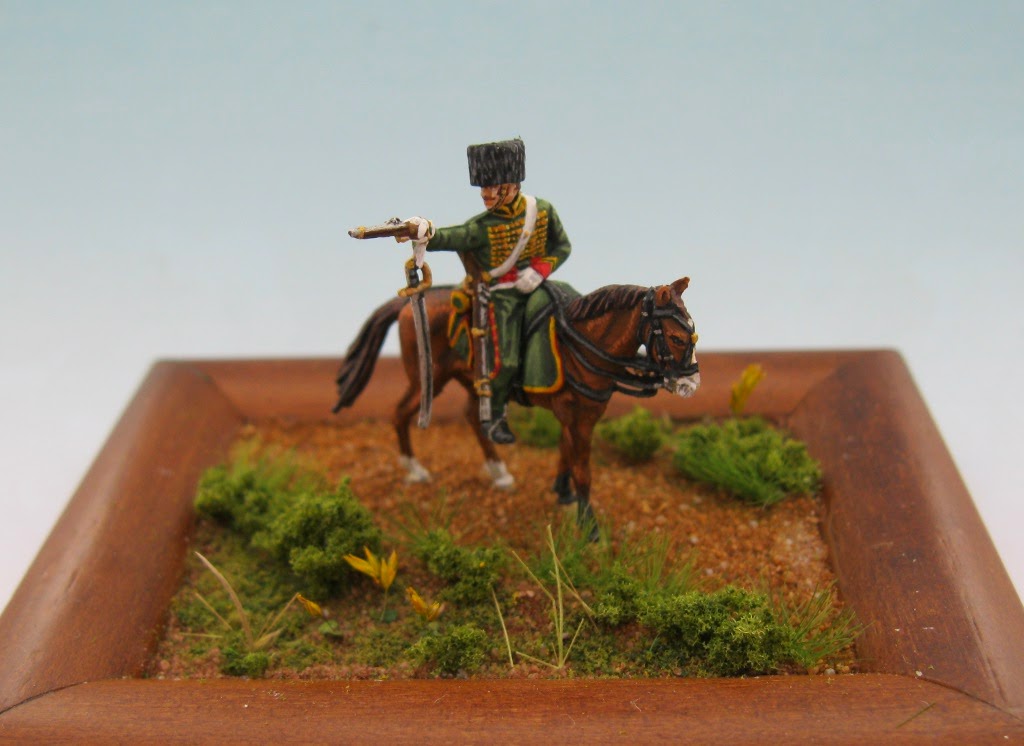 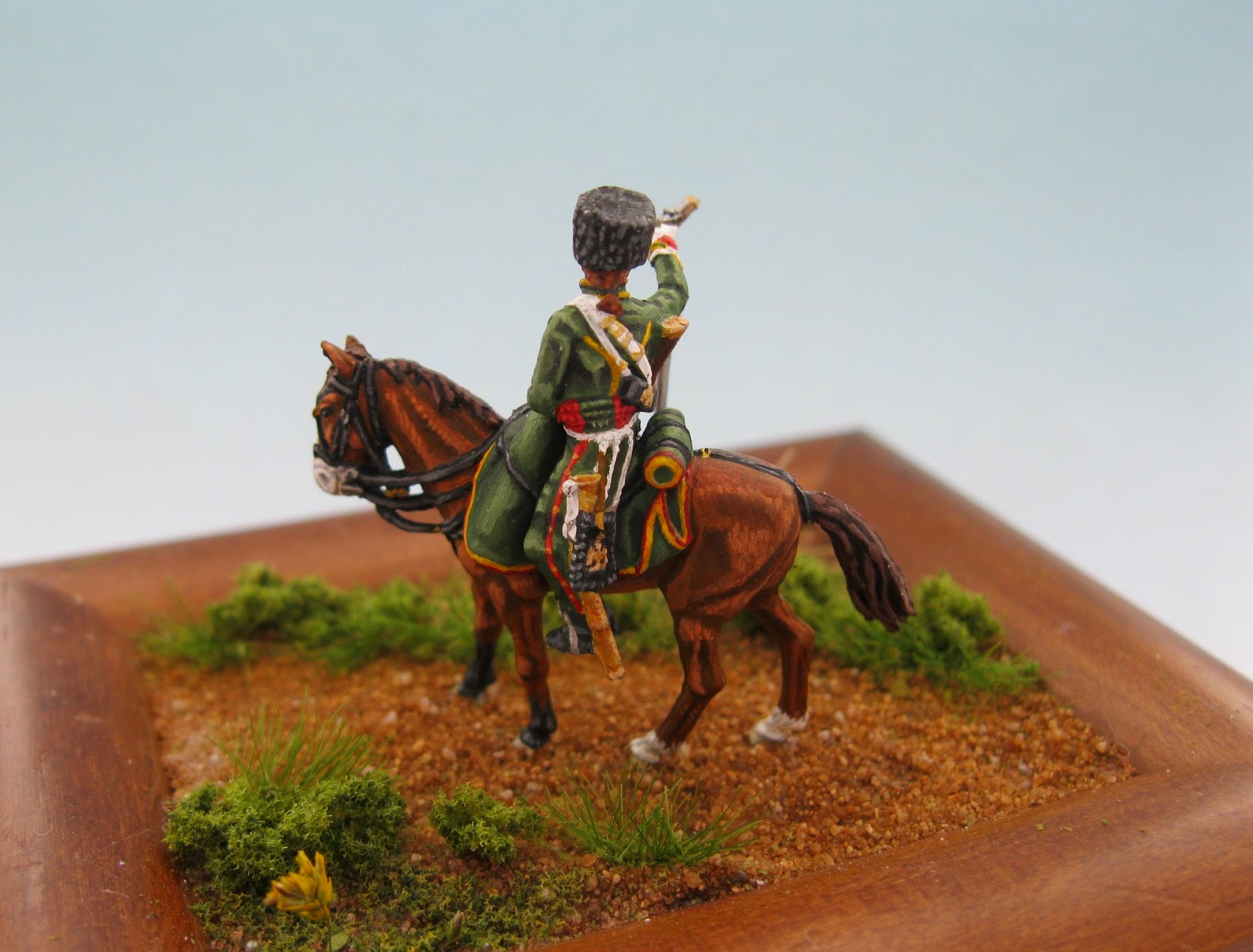 The figure is a Guard Chasseur a cheval from the old Revell set, a figure that Peter from http://peterscave.blogspot.de/ send me quite a while ago. I simply wanted to paint that one for no other reason then the fun of it and it stood in my cabinet for nearly a year. Very easy to paint, very easy to place details - a lovely figure. Thanks very much for it, Peter - you sent me a real matchwinner.

Well - there's more to follow in the next weeks. I have to add another display of Pre-Bardin soldiers and to force myself to create a diorama for all these Westphalians.