Yeah...
You know that effect when you've prepared something for weeks and then... <woosh> it's away with a glimpse of the eye?

This is always the case with the two usual 'suspects' I annually visit - the FIGZ and the ISSC.

Unfortunately for my purse, I wasn't able to resist buying different stuff. 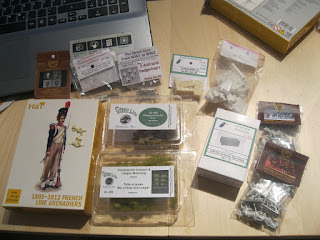 What these little thingies on the figure box are? You won't guess, I suppose: they're cats! :-D

Once again, the showroom was filled with many exhibitors and plenty of sellers. Therefore, it was much to discover, very much to see and even much more to spend your money on. In comparizon to other people, I actually didn't spend that much money.

Once again, the exhibits contained a lot of really great stuff. Several things were already to be seen in former ISSC shows, but there was also much new eye candy. Here are some examples: 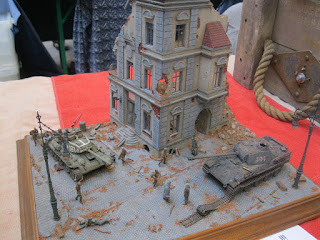 Once again, there was a competition. In my opinion, it was a really hard one again. Have a look at all these great work! 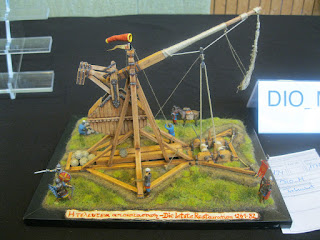 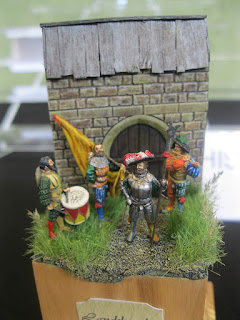 My single figure, being placed in the 'fantasy figure' cathegory lost against that Quetzalcoatlus. BUT as there were only these two contributions and the flying dinosaur not even won a gold medal, I'm pretty puzzled if my entry was really that bad not to deserve a medal at all. Strange. But I'm too friendly to insist on such things - I just wonder.

At least, I won a Bronze medal in the figure-related Diorama_standard cathegory - which was very lucky because the jury seemed to have had decision problems. There were three bronze medalists in this cathegory. Having seen all that marvellous work on the competition desk, I feel really honoured. And: all the medals I have ever won in Heiden were bronze medals. I'm starting to fell like Mr.Bronze. X-D

This car diorama, by the way, earned a gold medal, the best-of-show-gold-award and Bennos' special 1/72 trophy: 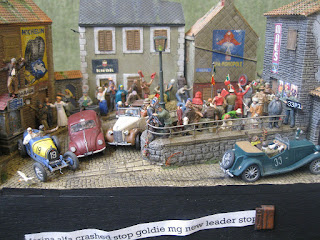 And another best-of-show award plus the diorama_s silver medal was given to this completely scratch-build film studio: 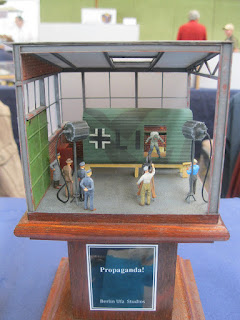 Being in Heiden was again a really great thing. My son (9) bought himself a box of HaT Romans and talks about nothing else ever since.

Special thanks go to Francesco (Franznap) who gave me a sneak preview of the forthcoming 1/72 Baden jagers and Baden general staff. There are some really great figures coming ahead, that's for sure!