Right. Sometimes, you just need some casualties to pimp up your diorama. War is bloody business. And far too few manufacturers give us the figures for a real grim setup of a battlefield.

So if you're looking for a good range of wounded/dead French infantrymen, you should probably have a look for Schilling figures again. Unfortunately, these figures are uniformed in the Bardin uniform with closed breast and therefore only useable for after-1812 scenarios, but as this includes Waterloo as well as the battles of 1813 and 1814, they are still very useful. 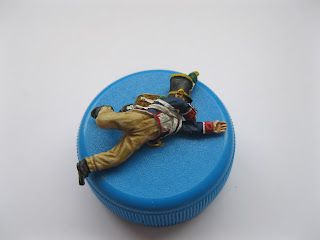 Figures come with separate muskets and backpacks - except from this figure which has the backpack still mounted. 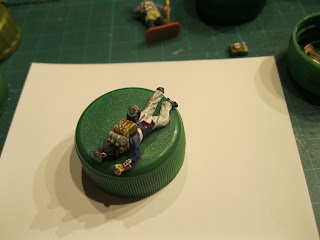 These are still not finished, photographed under bad light. Therefore, they don't look that great but I guess it's enough to give you an impression of how they look 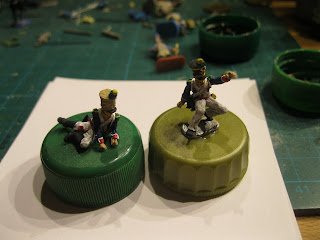 I don't have a clue for which exact purpose I'm going to use them. But in fact they already looked so nice un-painted that I just wasn't able to withstand to buy them. ;-)
Posted by Zed1 at 12:38 PM 2 comments: