Okay, friends, followers, random visitors - it's about time.
Whoever is interested in small plastic guys and vehicles should come and visit FIGZ in Arnhem, the Netherlands, on Sunday the 2nd of June. Yes. That means NEXT SUNDAY!

Yay, I'm really anticipating for this event since days. It'll be great to meet all these great hobbyists I know from Bennos' figure forum. Great guys, great day - a whole day out with the boys, enjoying the marvellous works of other painters. I suspect that there will be lots of nice new painting work and a lot of real eyecandy to be seen.

Btw - I managed at least to bring some of the white/purple Frenchies onto a base, but it's not completely finished yet. Therefore, there's no picture before FIGZ and the people visiting the show will be the first to see those strange uniformed guys.
In the meantime, I have started to paint the tirailleurs du Po. Nice blue and white colours.

Unfortunately, I wasn't able to find out a belonging officers' uniform for them. Maybe some of my followers may help me?

Well - the box is filled with figures. I have my competition entry ready. I have some spare money for buying new equipment, perhaps a new figure or two and - of course - the limited special FIGZ figure 2013, created by the formidable Alex: http://www.bennosfiguresforum.com/viewtopic.php?f=7&t=13687

(P.S.: and afterwards, I promise to post lots of photos and a post-FIGZ report for those who can't visit the event.  ;-))

Just a reminder: FIGZ will take place in Arnhem, the Netherlands, on the 2nd of June.
Anyone who is interested in 1/72 figures, small miniature painting and modelling should consider to visit this nice little eent - it's worth the journey.

I'm quite happy that I have managed to finish another legacy - the 1st rgt. etranger (Tour d'Auvergne), which was one of the first things I started for my pre-Bardin uniform project. It started with two painted figures and stood in my cabinet for far too long. 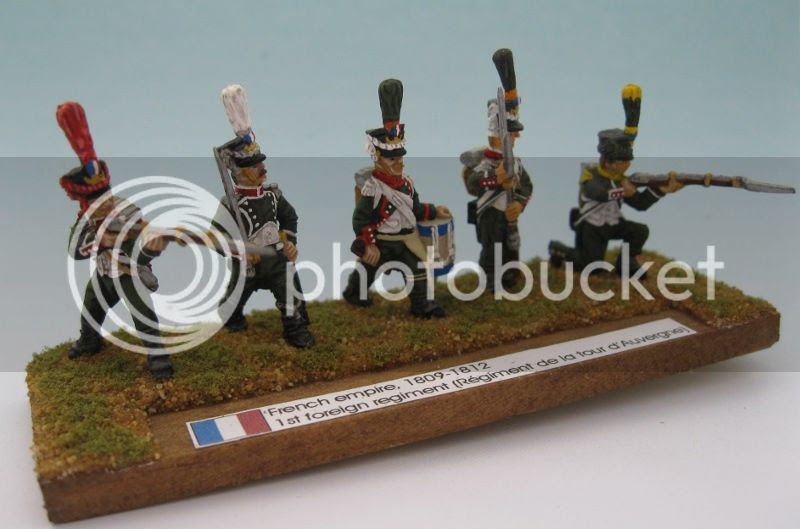 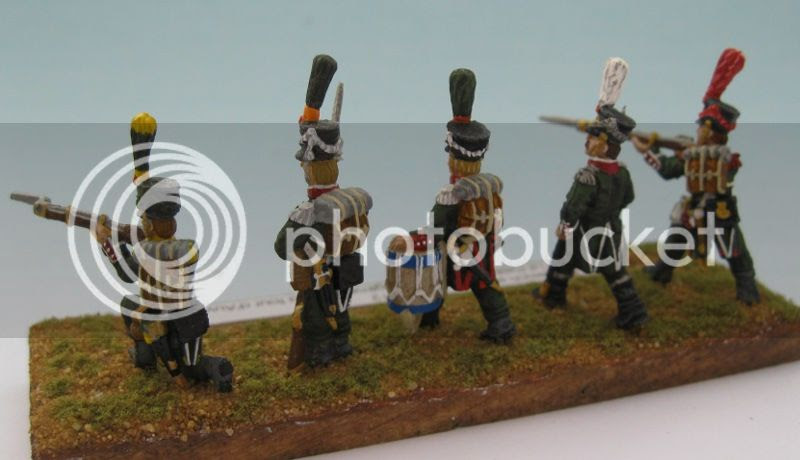 Shortly before the FIGZ is going to start, I'm happy with having finished almost all of my units, except from the Baden guard grenadiers. The Italian guards&velites will be abandoned - I don't feel comfortable with the old results, I think that I can do better with that subject.
And for the 33rd - still under construction. ;-)

Next thing will be the Tirailleurs du Pô - because my wife said so. Must be the nice blue uniforms. ;-)
Posted by Zed1 at 9:37 AM 2 comments:

Yee-haaa! I found it! Finally! My camera is back!
Hurray, I'm back into picture business again. Well - the light was not the best today, but after weeks and weeks I was just too eager to bring the pictures of the recent painting work online.

Since the beginning of this year, I had been working on contributions for the forthcoming competitions at FIGZ and Heiden. Unfortunately, at the moment I only think that I will manage to bring up single figures for both events. Well. Nevertheless, I can't show them here at the moment.

I could possibly have finished the group build projects also, but I was far too much fascinated by the new research results for my pre-Bardin uniform project (http://zedsnappies.blogspot.de/2011/07/project-all-varieties-of-pre-1812.html).

For that reason, it was necessary to finish as many of the old stuff as possible in order to be able to start with the new things. Again, I had to see that figures painted more then one and a half year ago, look a wee bit strange in comparizon with the newer ones...

The first are early Carabiniers of the three light infantry regiments, Kingdom of Italy in 1809: 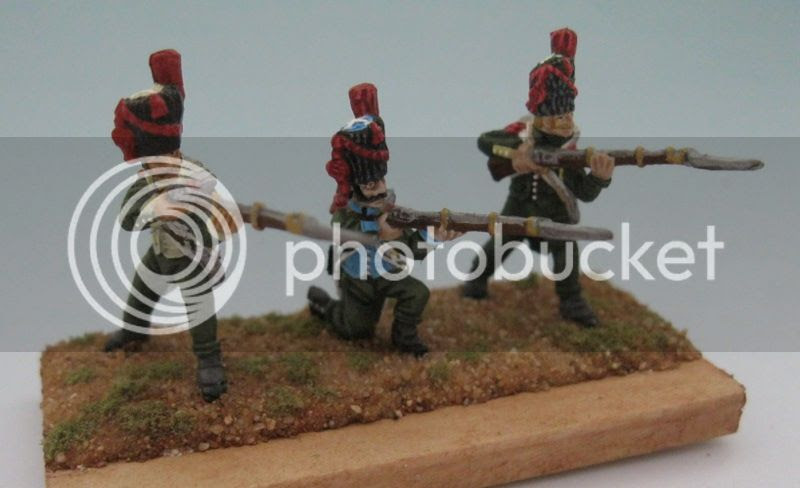 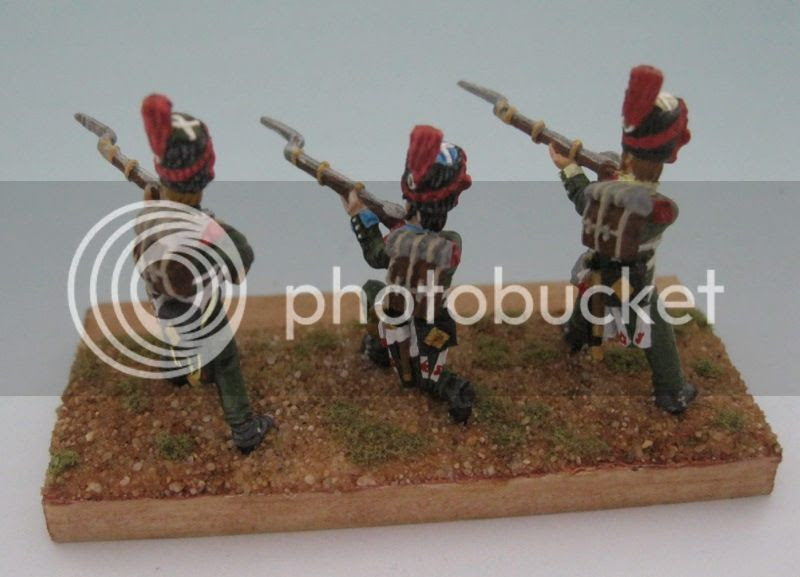 I especially like coloured vests of these guys. Plus the green uniforms - green is in my opinion the quickest-to-paint uniform colour of this period.

Additionally, I finished my setup of soldiers for the Hanoverian French legion: 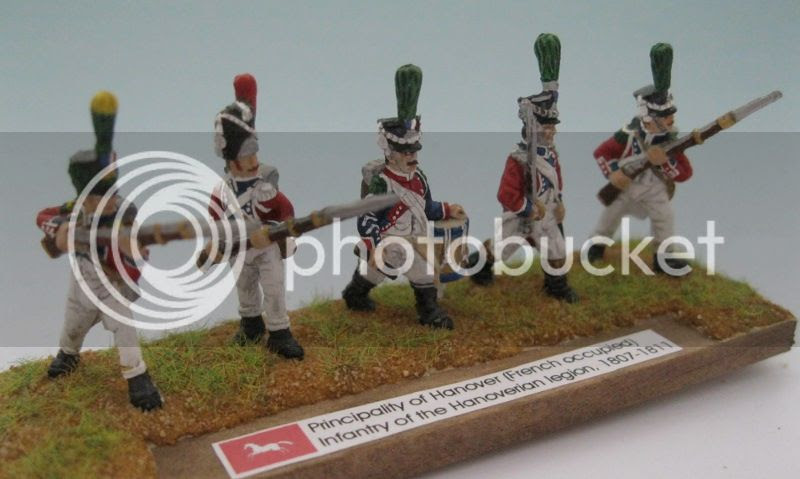 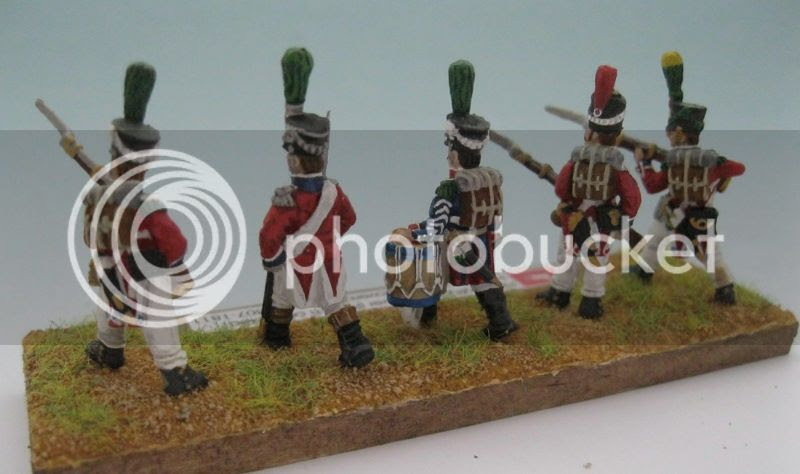 The last missing figure was the officer. I experimented a little bit with static grass again - this time, the result looks quite nice, although I have not used that silly rattle-box or other devices for creating the static electricity effect - I just grinded the grass between my fingers onto the base, then put it upside down and knocked a bit onto the backside. Done.

Back to green. The next one is the completion of something quite old. A longer time ago, I painted a fusilier for the first (provisional) Croatian regiment. 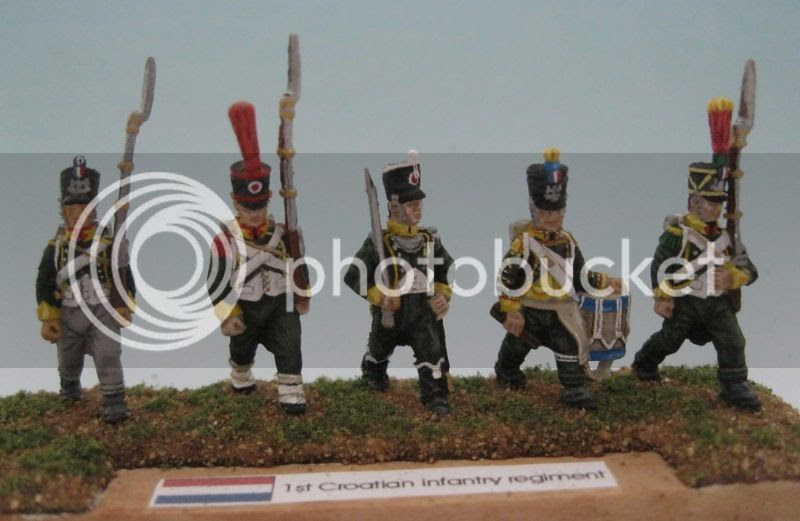 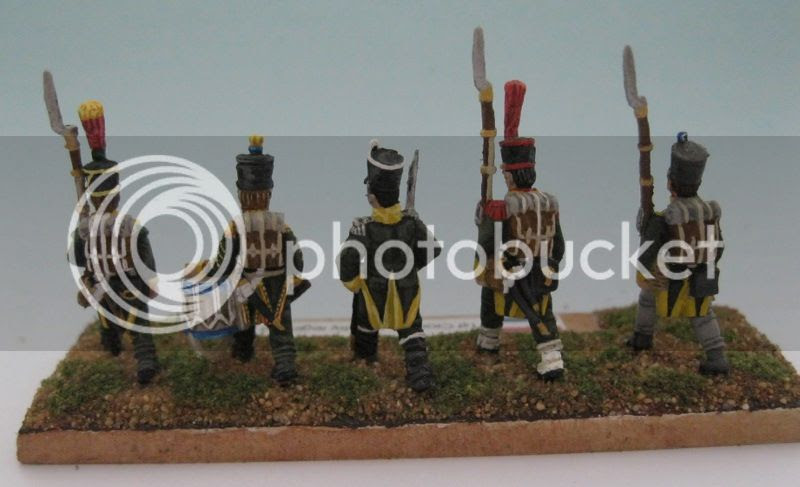 In combination with yellow, the green looks even nicer, doesn't it? These guys required a lot of carving work on the shakos because in almost all cases, I had to carve off all shako insignia.

In regard to modifications, these folks were much easier to create, because they are basically standard voltigeur figures, representing early members of the 1st and 2nd regiment of foot velites of the Kingdom of Naples: 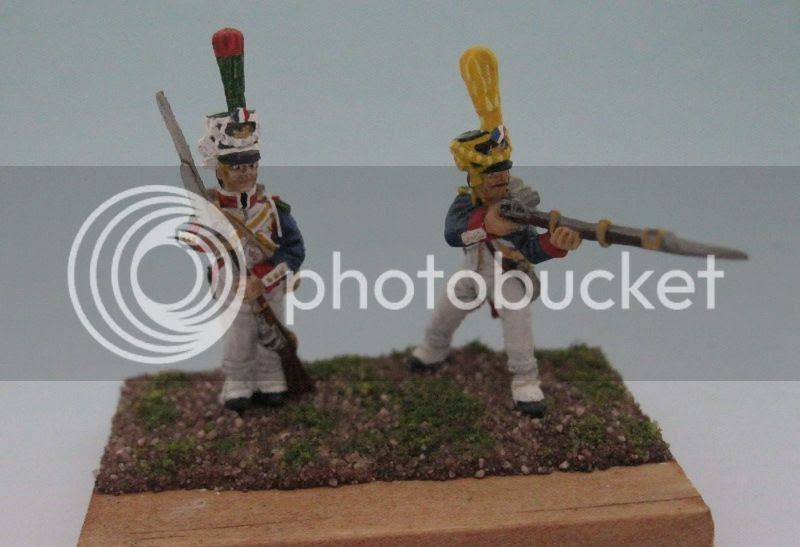 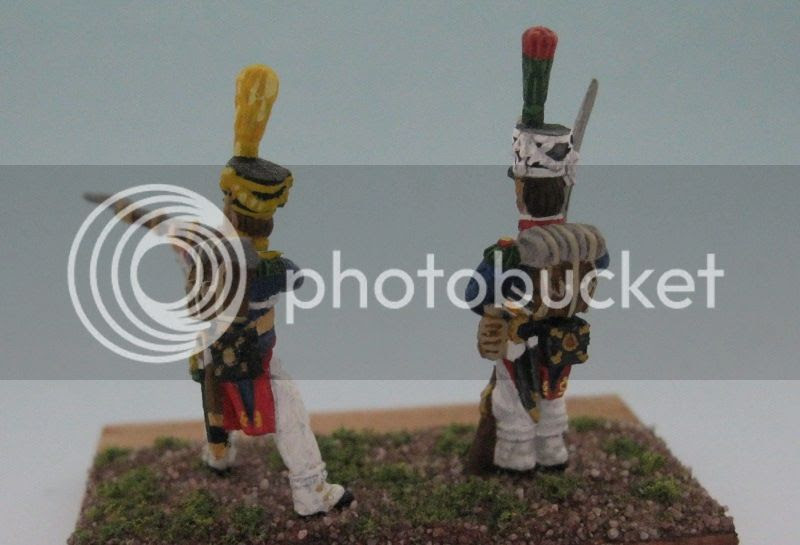 This is an 1808 outfit - a lot less splendid and spectacular then the later guard velites uniforms with bearskin caps and loads of golden laces. Nevertheless - a pre-Bardin uniform.

But who are these chaps? Any suggestion? 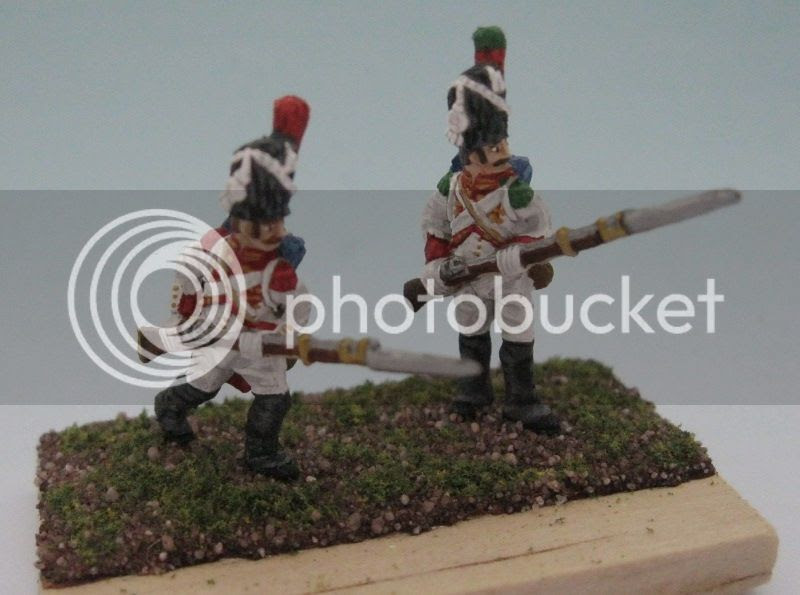 Hehe. What do you think from where these folks came? 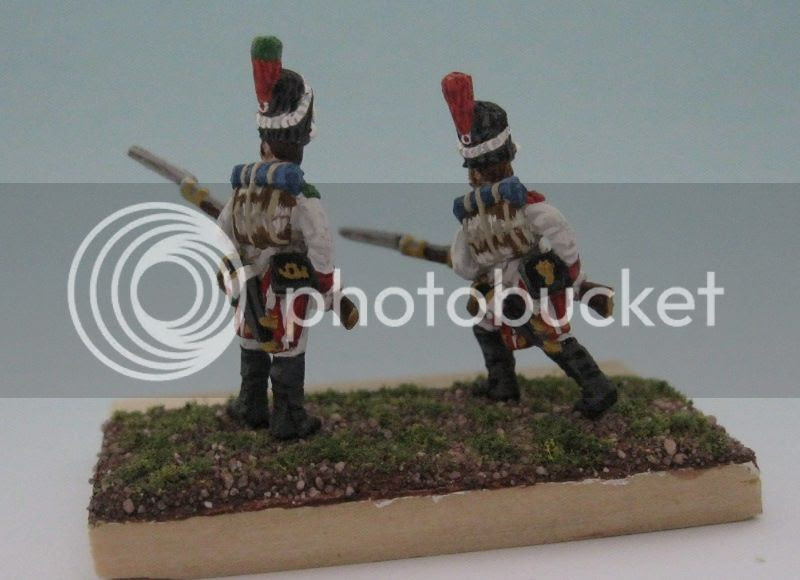 The time is around 1809 - and they're Dutch!
A grenadier and a chasseur of the lifeguard grenadier regiment. I found them when I wondered why there was no "No.1" line infantry regiment in the army of the Kingdom of Holland. The reason is simple: regiment number one were the guards.

For a long time in this project, I kept my eyes on Frances' allies, it's special troops and foreign regiments. I never took much notice on the French army itself. I just thought that at the time I'm finished with the whole project, I'll paint a single bunch of French line infantrymen and that's it. But I was wrong.
In the meantime, I have not only discovered a wide range of different uniforms within the French core army itself (especially when it's about drummers' dresses, plume and epaulette colours, etc.) - I have also discovered that with a few modifications, this set works well for light infantry as well. 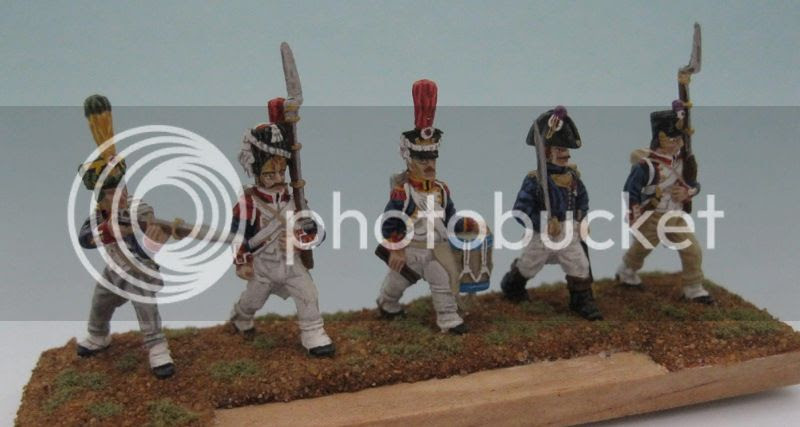 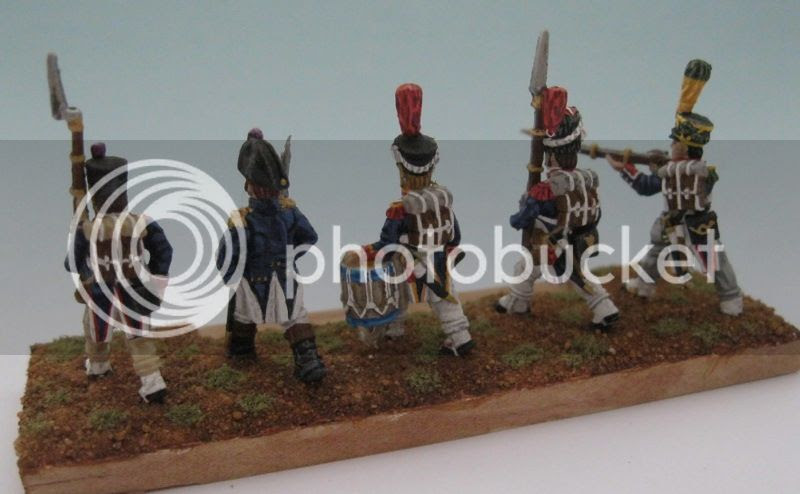 This one represents the 63rd line infantry regiment. More of them are about to follow, taken into account that creating French core infantry requires the smallest amount of modifications.

We will see if I'm about to finish the 33rd in their ridiculous white and purple uniforms until FIGZ. I have finished my setup of the 1st foreign regiment (tour d'Auvergne) yesterday, but the basing still has to be done, so I have not posted them here yet. As there are around two weeks left for basing work, I'm going to bring around 30 units to the bring-and-show at FIGZ for this project only. 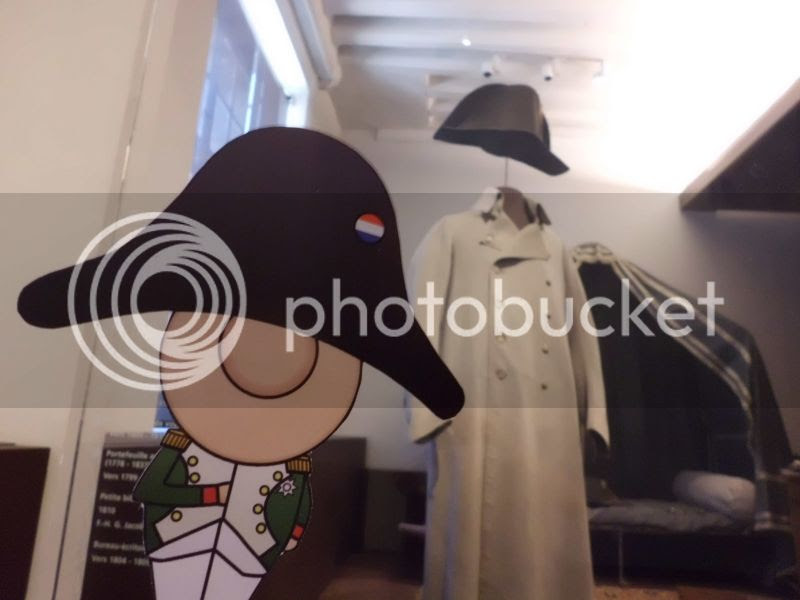 Hurry up, folks! It's only a few weeks left until FIGZ 2013. On June 2nd, wargamers and miniature painters can be stared at in Arnhem. And yeah, I'm really looking forward to it.

I still have some labels left to be printed. Unfortunately, the printer doesn't work as expected. Looks as if technology is not my friend these days. Guess what I still haven't found? Right. The **** camera.
Whatever. I'm prepared. Hehe.

Almost three weeks without a single brushstrike - my hobbyplace is a building lot right now because my wife thought it's about time to renovate our complete home. Well, it's itching in my fingers to finish the 33rd French regiment, but I suspect that I will not have it ready for FIGZ - perhaps until the ISSC in Heiden. We will see.

Fact is: I have something ready for the competitions at Arnhem and *giggle* Peter - without saying too much, it will have to do with goats. ;-)