When I made up the concept for my Pre-Bardin uniform project, I originally had in mind to depict the uniforms of all the armies which fought in the same uniform as Napoleons French army did. As I went through my research, this concept of painting all possible varieties of that uniform type diversified a lot. For example, I wasn't aware about how many different units with different uniform colours even the Italian army had.

I wasn't aware about how much different varieties of the same uniform were in duty even within the French army itself. And this is why I have to paint at least several different French regiments in order to display that even within an army with common regulations, there was a certain range of variation.

My newest unit is the line infantry regiment no. 30: 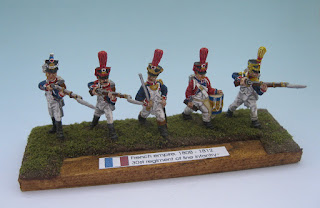 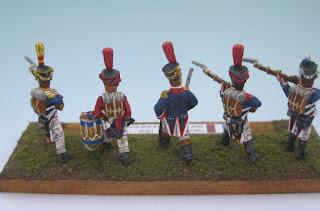 What all French line regiments had in common, was the general design of the uniform and the basic colouring. Some regiments directly adopted the shako for grenadiers, some not. Some had the shako rim coloured in the colour of their branch, some not. Etcetera, etcetera...

For direct comparizon, here's the 63rd regiment once again: 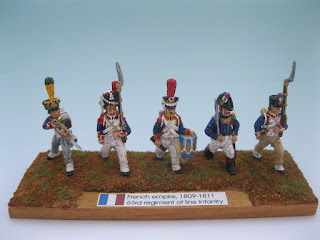 The main difference throughout all the regiments is the colour of the musicians/drummer uniforms. This may have - if I'm not wrong - have to do with the former distinctive regimental colours worn in reverse order. Whoever has more information about the logic in behind of the drummers' uniform colours, please let me know!

I'm currently finishing a row of figures for my long-term-PreBardin-Uniform project. Yet I'm not sure how to base them - row by row as I did with the Italian line infantry or as a complete block.

The uniform type and equipment was the same as that of the regular line infantry, but the cloth was dyed in a lighter shade of blue plus the different 'legions' could be distinguished by a certain colour code. Basic colours were white, poppy red, green, yellow, orange, dark red and black. The specific combination of cuffs, collar and breast either being in the distinctive company colour or in light blue defined the belonging legion. 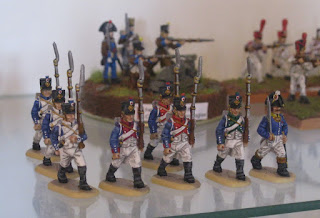 So here's the start of it. The rest of white, poppy red and black combinations are still on my desk. The rest will follow.

Usually, all the conscripts for whom there wasn't a place in the regular units, were transferred to the reserve. Apart from being a pool to fill up the ranks of the regular regiments, the reserve companies had an important role as a rearguard. They were the military force the prefects could use to enforce their orders. They guarded important infrastructure, catched criminals and deserters, guarded prisons, cared for the public security and fullfilled a lot of other tasks behind the lines.

As units, the departmental guards were seldom used for battle. There were only some cases in regard to the defensive operations in 1814. In the beginning of that year, the reserve companies were dissolved and their men distributed to the various regular regiments.
Posted by Zed1 at 6:11 AM No comments: