Another year is passing by. Only a few hours and 2015 will be history.
A year that, for me, had a good start but didn't end all too well. We will see if 2016 will be an improvement or... whatever. Me and my family are at good health (after the flu catched us during the holidays), we have a roof over our head, a water tap that provides clean water, enough food storage that spares us from starvation and we mustn't fear that all that might be bombed away just the other day. In other words: although I'm far from being a wealthy man, at least me and my family can enjoy more life comfort then most of the people on this planet.

Let's not forget: if that's your life standard too, you're privileged. Be thankful for that and give your share to others!

But let's get back to the hobby. Last year, I made a plan for 2015. Let's have a look how much I have fulfilled that.

Okay. That's not a 100% performance, but not that bad at all. But what was my actual painting performance this year?


That's a total amount of 90 figures on foot and 14 mounted ones. More then in 2013, but less then in 2014. Taking into account almost 3 months of time during which I nearly didn't paint anything at all due to moving to another place and managing my new job, I regard this years' output as well enough.

So what's up for 2016?
On the one hand, I'll have to proceed with my PreBardin-project. I found some new uniform pages which raised the total uniform number to 401, which means I'm still half-way through, having 197 figures left to be painted.

I will, of course, also make some pieces for the forthcoming FIGZ and this years' Heiden ISSC. Possible features for these may include antitank obstacles, Kois and time travelling. ;-)
In fact, I'm planning to finish some old projects of mine. The Russian hussars, for example. I had some ideas in the last three years for which I bought figures (or the other way round), but I never finished – or even started – these projects. With all these great figures that Alex, Francesco and others are producing, I decided that I cannot wait any longer. If I do, I'll end up with a hundred ideas and some thousand figures sooner or later.


Sounds manageable. But we will see. ;-)

Thanks to all my regular visitors. It's nice to have you here and share my work with me. To all 'comrades in hobby' – keep up your brushes and enjoy painting!
May you all have a great New Year – goodbye 2015, let's welcome 2016!
Posted by Zed1 at 12:06 AM No comments:

Hussars all over the place

The end (of the year) is near!
So before I start looking back on how I matched my painting goals for this year, I'd like to present my latest paintwork to you.

After having them on my desk for somewhat over a year, I finally finished the Austrian hussar skirmishers that I got from Francesco (Franznap). I decided to paint them in the colours of the 5th regiment, especially because I liked those red shakos. Regarding the yellow upper rim, I'm still unsure wether that black/yellow pattern is authentic or not - I found both versions on pictures. Maybe someone could help me with that detail? 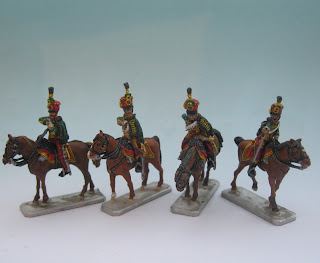 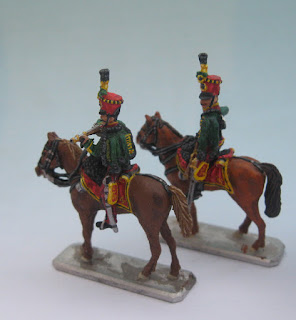 These are really fine models, as always when it comes up to Franznaps' figures. Most appreciated is the fact that these horses are standing still. In plastic sets, you usually find trotting or gallopping horse poses and I suppose that everyone can imagine what sort of accuracy you can expect when you try shooting a Napoleonic age carbine from horseback while the horse is moving.

I'm still not absolutely sure what to do with these chaps. I have a small diorama in mind, with Austrian hussars, lancers and infantry fighting Baden troops in the woods. We'll see about that, I'm still thinking about the concept.

Talking about concepts, I re-discovered some figures I started to paint quite a long time ago. Three years ago, I thought about a display with figures from all 12 hussar regiments of the Russian army of 1812. I started painting but never finished the whole party. Now I found them in my cabinet. Actually, most of the paintjob is already done. I just thought that I might finish that job next year, what do you think about it? Here are some pictures of the figures that are already finished: 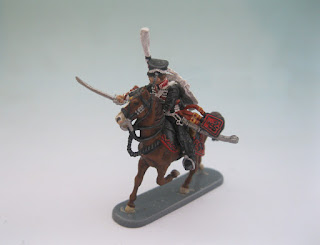 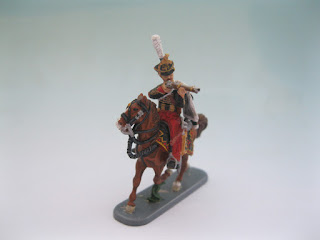 Main problem with them are the different sources. But I still think that - with some corrections concerning the faces - this little project could be worth to be finished. These Zvezda hussars are highly detailed, although I find them hard to paint in concern to all these very small stripes and cords.
And is it just me or are the horses a bit too small and slender for their riders?

Well - christmas time is coming. For my family, this means particularly to tidy and clean the rooms because we'll have a few family members coming to visit us. Half a year after we have moved into a smaller appartment, we have still some boxes left and some stuff to be sorted.

When will the holidays start and give me lots of painting time? sigh

In regard to the Brunswickers, I have painted 5 of 9. 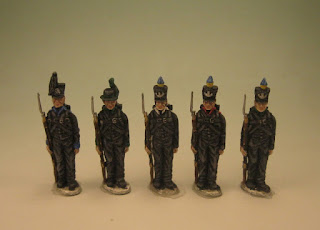 On the right side, you can see the representants of the three line batallions. 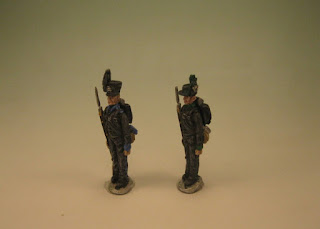 Additionally, we have the lifeguard and the light infantry of the avantgarde.
Light infantry batallions and avantgarde 'gelernte jaeger' are still under construction.

Oh - and then, it's people on horseback once again. I can't stand mounted figures too much. As I said for a multiple times, didn't I? Nevertheless, sometimes you can't avoid it. For a forthcoming diorama project, I needed some rather relaxed French dragoons. 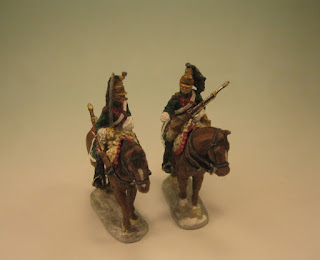 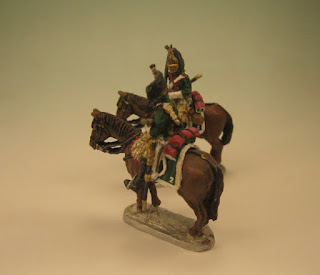 I found them at www.schmaeling.de - the group contains four figures of which you can see two here.
The muskets are delivered separately which allows some modfications. I really like the fact that the figures are modelled together with the saddlecloth - it fits much better onto the horses as it does when only the rider has to fit into a saddle that has been modelled onto the horse.

Which brings me to the next story - Austrian hussars, made by Franznap. Brilliant stuff - the figures are really detailed down to the button. But in case of these sets, you need to be a bit careful because not every rider fits good onto every horse. 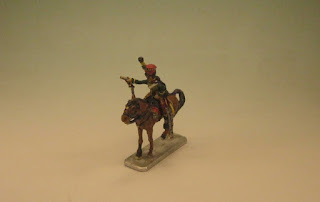 Francesco Messori models rider and horse much more as a unit. They fit perfectly together as long as you take the correct horse for a specific rider. As all other figures in this posting, these are metal figures. 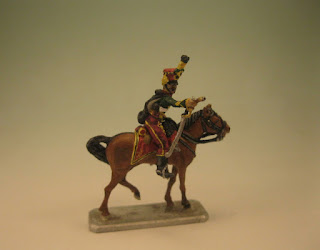 For some reason, I haven't painted many plastic figures in the last months. Probably, the range of different units and poses is much greater in the metal figure market.

Which doesn't mean that I'm not continuing my long-term-PreBardin-uniform project. I've started to work on Italian line voltigeurs and French reserve companies, but this'll take more time to get finished just because of the higher number of figures in these units.

Anyway, the year is coming to it's end. I hope that I'm going to finish these hussars - I have laborated on them for months. It's time to get this small project finished.