I just noted that I have a few things that I have in my cabinet which haven't been posted here.
One of these are Austrian Ulans from Franznap which actually were a gift from Francesco Messori, the artist who has sculpted these figures.

There were several regiments of Ulans in the Austrian army during the Napoleonic era. Lancers were actually pretty popular among many European armies of that time. As light cavalry, they fulfilled many roles. Therefore, these chaps were not only equipped with lance and sabre, but also with firearms. 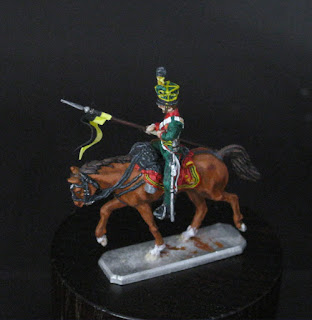 The main difference between the Ulan regiments was the colour of the Czapka helmets. The depicted regiment, No.2 (Fuerst [sovereign] zu Schwarzenberg), had Czapkas in green colours. 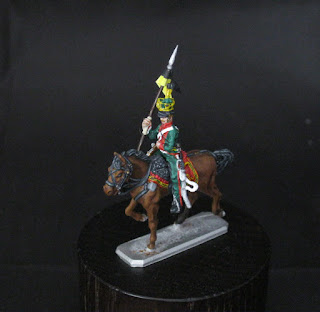 The set contains four mounted figures. The weapon arm - in one case the lance itself - are delivered separately, which makes the fixing of the flag easier. Taking into account the many different poses that can be achieved by attaching different arms in different positions and mounting different figures on different horses, you can create a really huge cavalry force in which every rider looks somewhat different. 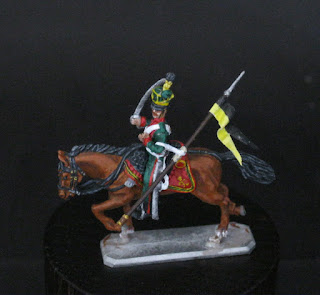 Personally, I don't like to paint cavalry too much - it it more time consuming then painting infantry, painting horses gives me the creeps. Nevertheless, I can only say that these are magnificient miniatures. Easy to paint, highly detailed. 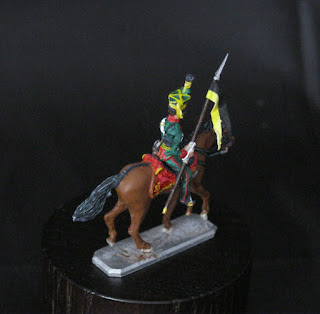 For the wargamer records, this is a unit that can be used for many scenarios. One squad fought at Austerlitz, the regiment at Essling, Aspern and Wagram. During the 1813/14-campaign, it fought at Hanau, St.Croix, Brienne, Troyes, Bar-sur-Aube and Arcis-sur-Aube. It was not in battle in 1815.

When I read about the configuration of the US army from the period of the 1812 war, I was surprised to read that it consisted far more of infantry then the European armies did. Actually, the regular army only had around two regiments of dragoons and that was it. Most cavalry units on the US side came from the state militias and, again, that cavalry mainly consisted of dragoons. Boston, located at the Massachusetts Bay, at that time was - according to the 1810 census - the 4th largest city of the United States of America with a population of around 34000 people. Massachusetts obviously had a style of it's own - among the units that they sent into battle, was the only Hussar unit that participated in the war of 1812 on the US side.

The Hussars of Boston were equipped in 1810 in a sort of mixture of Prussian-hussar and French guard-hussar style by Josiah Quincy and were formed as elite militia cavalry. This unit existed until 1818, but it didn't see much of a battle as far as I have read. But the Hussar phenomenon wasn't over then - there were four other regiments that existed in the US army system - the Georgia Hussars for example existed until 1867. 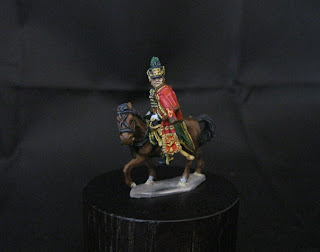 I first discovered the Boston hussars on a unitorm page on www.theminiaturespage.com among the units of the Massachusetts militia. For a while I tried to convert other hussar miniatures, but always found that there were some features that were simply differing too much from European hussar uniforms & equipment in order to be replaced or imitated just by converting and mixing some European hussar figures. Next step was the try to re-model the required parts with greenstuff, but after all, even that proved impractical. 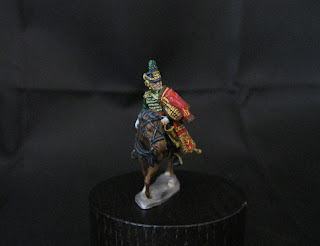 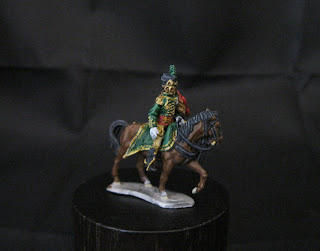 I finally became convinced that it would be the wisest way to make a complete new figure by. scratch - unfortunately, I'm a total loser when it comes to figure modelling. So I contacted the guys at www.hagen-minatures.de and placed my very first order for a brand new figure. The master can be seen on http://historyin172.blogspot.de/2017/06/a-boston-hussar-1812.html - it has been created by Massimo Costa. If you like to have one, you can order the Boston Hussar miniature at Hagen's shop. 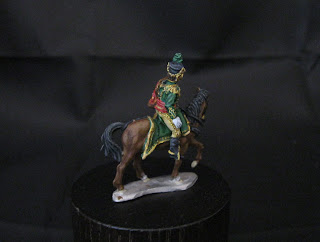 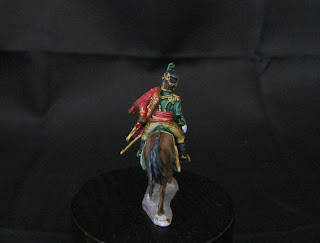 That uniform colour in addition with the other features makes a splendid little miniature. It wears the great dress - but with a sharp scalpel you could easily cut away all that decorating stuff on the trousers in order to switch it to the field dress look. I'll do that with one of my Boston hussar figures in a while. ;-)