Okay. Let's learn something, shall we? This is going to be a long read, but it contains a lot of information about another not-so-usual aspect of the Napoleonic French military.

When I started my 'paint all units in PreBardin-style uniforms'-project, I thought it was all about painting battlefield military units. Well - after a while I learned that I was totally wrong. I come from a country where you have the army on one side and the police on the other side. While the army is responsible for protecting the country against foreign enemies, the police is responsible for internal security. One side carries the big guns'n'stuff while the other one is equipped in order to deal with criminals, riots and keeping up public security.

Back in the days of Napoleon Bonaparte, this wasn't the case in the same way throughout Europe. In many states, the king or local nobles payed for armed units that served as a militia which local nobles or representatives sent out to carry out police-like duties. This 'state militia' was the root from which the gendarmerie evolved, a paramilitary force that - in wartimes - often was used as light cavalry or horseback infantry. In other states, this function was carried out by the king's guards.

When I first discovered that there was something like a reserve army in behind of the line army of Napoleon's France, I was really puzzled. I read about 'reserve regiments' especially in the Prussian post-1812 army organisation structure, but the French counterpart wasn't only about creating regiments that were just for filling the gaps in the field army's ranks, the French departmental reserves were an armed body that carried out actual tasks.
For the project, things got even worse when I found out that the larger cities also had their own military units, called 'Garde d'Honneur' - and that these also had their very own uniforms. So there was an army behing the army behind the army.
When I already thought to have painted most units, the number raised up again. Oh. My. Goodness.

As there were so many of these companies, painting them one by one would have shot the number of necessary drummer and officer figures under the ceiling, resulting in buying boxes of figures just for getting enough of just two figure types. On the other hand, I thought that people would like to see the system in behind of the different uniform colours. So the idea was born to put one figure per company onto one display. But making the groundwork for a marching block of more then 30 figures was a nightmare - and that's why I just finished this project a few days ago after a period of at least eight months from which I finished the last of these figures. Now here it is. 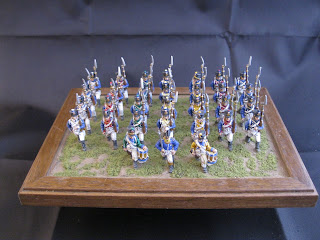 By decree of May 1805, France created reserve companies for the internal security business of the countrie's departements. The size of the specific companies differed according to the population size and financial power of each departement. Actually, these companies were positioned somewhere between the gendarmes and the regular troops. Their duties were the protection of the justice apparatus and key infrastructure (prisons, prefectures, archives, depots) plus being a guard for official representatives. With having the reserve companies under their command, regional governors, who were the local representatives of the emperor's authority, received their very own armed force.


Being in the reserve nevertheless meant being a soldier - laws and regulations were the same. The prefects as commanders were responsible for the quality, morale and payment of their troops and had to write regular reports about troop conditions to the ministry in Paris. Nevertheless, reserve recruits were not to expect medals and a military career. The daily business of the reserves was guarding buildings and roads, catching deserters, guard prisoners and protect public officials. Apart from that, regular exercise and weapon training guaranteed that the reserves were always able to fill up the ranks of the line regiments.

The departemental reserves were no doubt being considered to be real soldiers. Some reserve companies even went into direct combat, for example in the Peninsula or to counter the landing of British troops in the Walcheren area. Eastern departemental companies took part in the fighting during the 1814 campaign on French soil. In Napoleon's view, the reserves were a big pool of supply for the grande armee. Every now and then, hundreds of men were drawn away by the emperor's decree in order to fill up the losses of the line regiments or even to build up new regiments.

By the table, all departemental reserves were equipped in the same way as the linen fusiliers. In order to give each departement's force a specific distinctive uniform, the ministry invented a colour code. The methodology was simple. There were seven basic colours: white, poppy red, dark green, yellow, orange, purple and black. The first seven legions (companies) wore their distinctive colours on breas, cuffs and collar. The 8th to 14th on breast and collar, the 15th to 21st on breast and cuffs and 22nd to 28th on breast only. Drummers wore the company colour code in reverse order.

By 1807, bicornes were replaced by shakos. Due to decree of 1808, the blue uniform was replaced by a white one, but in the same way as this was handled in the regular army, the colour was switched back to blue again without many companies even having received the new uniforms. As I found no documentation on which company actually got a white dress, I decided not to paint them at all.

The result looks really nice, doesn't it? It's certainly the largest 'unit' of this project so far.

To strengthen his reign, Napoleon Bonaparte put a lot of his relatives onto European thrones. Sometimes, there had be certain arrangements to be made to secure them. At least, so it seems if you look at the Velites de Turin.
They were created in March 1809 as a battalion in order to protect prince Borghese, Napoleons brother-in-law, who served as governor-general for the French departments in northern Italy. 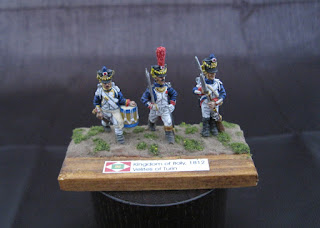 Having guard status and officially being part of the Imperial guard, they wore guard uniforms. Originally, most of the ranks were build up with Italian men while the officers came directly from the French guard grenadiers. 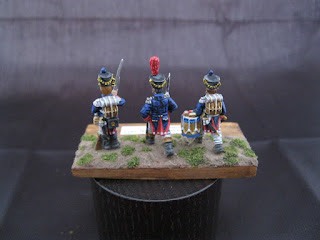 The Velites de Turin fought actively in the battle of Leipzig, mainly in the covering of the French retreat. They were also actively fighting during the campaign of 1814.

Well - here we have something rather off-line again. And things will - I promise - get even worse regarding the diversity of this Pre-Bardin uniform thing. I discovered a new book that brought up a whole new aspect that I didn't have on screen until now. And it brings new uniforms, new units... gosh... if I knew that before...

Venice, a former big European player during the centuries which had declined into a local player when Napoleon showed up, brought in it's very own guard unit when the army of the Kingdom of Italy was formed. Here it is: 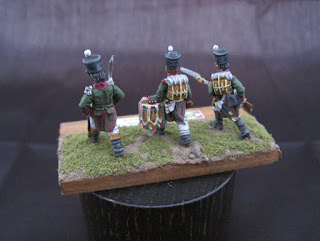 For the statistics, I have now painted 313 figures representing more then 60 different units. That's about 120 left to be painted - if I don't find more units.