As the shop where I have bought several sets of HaT 8095 French infantry is about to close, I decided to buy the sets that will be enough to finish my Pre-Bardin-uniform project. 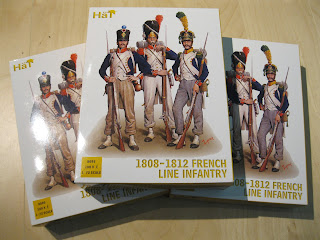 Three new boxes of figures. Having 154 figures left to be painted, I suppose that the officers and Elites in these boxes will be enough - this means if I don't find much more new units. The last one that I have discovered were King's guards of the Kingdom of Naples. X-D
Posted by Zed1 at 10:24 AM 1 comment:

It's FIGZ time again! On 5th of June, miniature enthusiasts - not only from Benno's figures forum - will come together in Arnhem (Netherlands) to show their miniatures, play wargames and spend money for useful equipment and new stuff.

You will find more infos on www.figz.nl. I will certainly be there. How about you?

Today I'm going to start some groundworks again, because my display of Brunswickers must be ready for FIGZ. 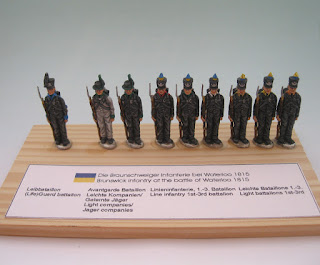 I bought some Brunswickers from Schilling figures back at the ISSC show in Heiden last year in order to paint the different uniform patterns of Brunswick troops at the battles of the 100 days campaign. There were guards, line and light infantrymen present at Waterloo and although (except from the light avantgarde infantry) they all wore black uniform, there were little differences between the battalions, such as collar colours and differently coloured stripes on trouser sides.

So finally, I ended up with 9 figures. Putting them into a frame looked somehow odd, especially because I had to make a different factsheet for explaining the difference between these figures. Therefore, I had to go and by some broader wood. And now, I'm ready to finalize this project.

The figures themselve are nicely modelled, although the bajonets look a bit short. They are mounted on very small bases - you have to glue them onto a crown cap or something similar for painting because if you only use tweezers, the figures will snap off time after time.
The reason why I bought them in the first place was that I liked to paint black. There's in fact not much to do about it - paint them dark grey, add dark black shades, highlight folds in mid grey. So much for the theory, because there's much highlighting to be done, folds have to be accentuated carefully and then there are those Hussar-style laces on the uniform breasts that take you some time to be done accurately.

Nevertheless, I like the results. Although I wouldn't like to paint a hundred of these chaps, the ones I painted were fun to paint.

Yesterday I finished the Kingdom of Holland line infantry for my long-run Pre-Bardin uniform project. That's one month after showing you the first pics. 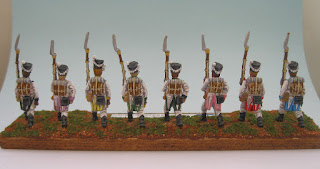 What do you say? I'm really happy with those chaps, I like these colours.
Btw - the pre-Bardin half-breast uniform was officially worn only in a short period during 1806. After that, the closed breast variant was worn which is to be seen on so many planches showing the Dutch troops of that time. Nevertheless, uniforms were not changed 'en bloc' and that means that even the half-breast type was partially worn for some time in parallel to the other dress. 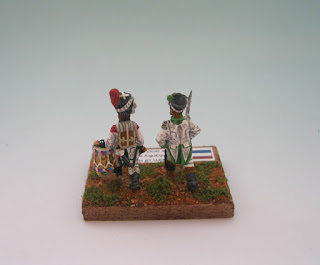 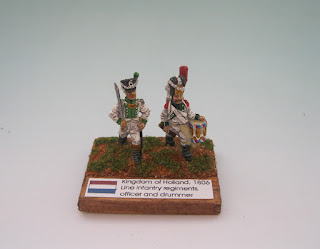 This was, in fact, usual practice in pre-industrialization era armies. Replacement of uniforms usually took quite a long time before it was completely finished. By the way- here's the officer and the drummer for my Kingdom of Holland troop setup.

In parallel, I finished a little single figure vignette for the forthcoming FIGZ in Arnhem next month.
FIGZ is only four weeks ahead - so if you have some time left on June 5th and like to see some really good 1/72 stuff plus lots of wargaming, come and visit FIGZ - entry is free!