Well, well. I'm still much too busy - it leaves not enough time for painting. At least, I have managed to finish most of the relevant bases. Therefore, I have decided to refurbish my project threat for per-1812 French uniform style patterns (http://zedsnappies.blogspot.de/2011/07/project-all-varieties-of-pre-1812.html).

I put up all based units there. Which means that a small number of already painted figures is missing there - the Naples guards are under base construction, 3rd Swiss regiment, 4th Foreign regiment and the Piemontese are about to be completed.

Hopefully, I'll find enough time to complete them until the end of May.

Could anyone please prolong the usual amount of daytime hours? Perhaps to 46 hours? ;-)
Posted by Zed1 at 11:04 PM 3 comments:

...here is another one.
Some of my regular visitors may remember that back in October 2011, I got a test shot of HaTs' new Brunswick cavalry into my hands (for those who don't remember: http://zedsnappies.blogspot.de/2011/10/sneak-preview-2-forthcoming-prussians.html) and that I was not too happy with the overall appearance of these figures.

I thought about alternative ways of painting for them and for the lancers, I really found one: the seventh Prussian Uhlan regiment. It was one of the few that did not wear the classic Uhlan uniform and I only had to make minor modifications and - of course - use a Prussian horse instead of the Brunswick ones. 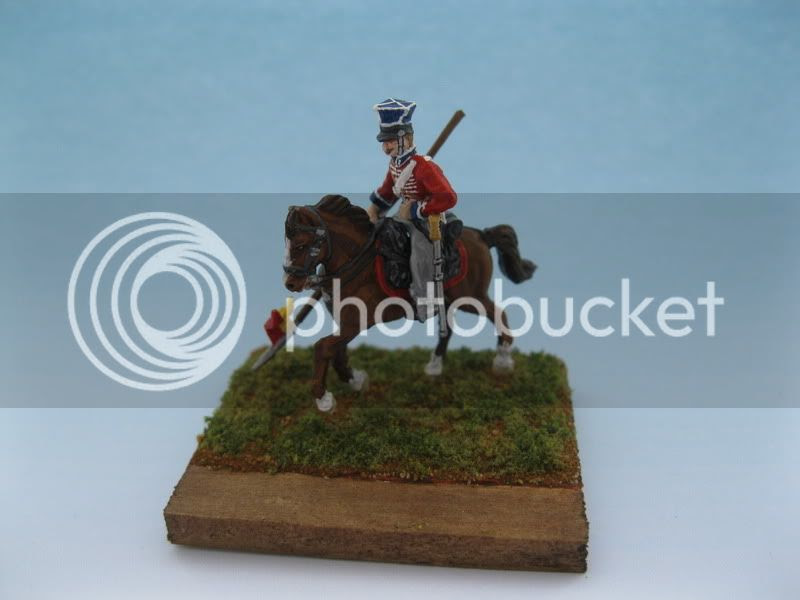 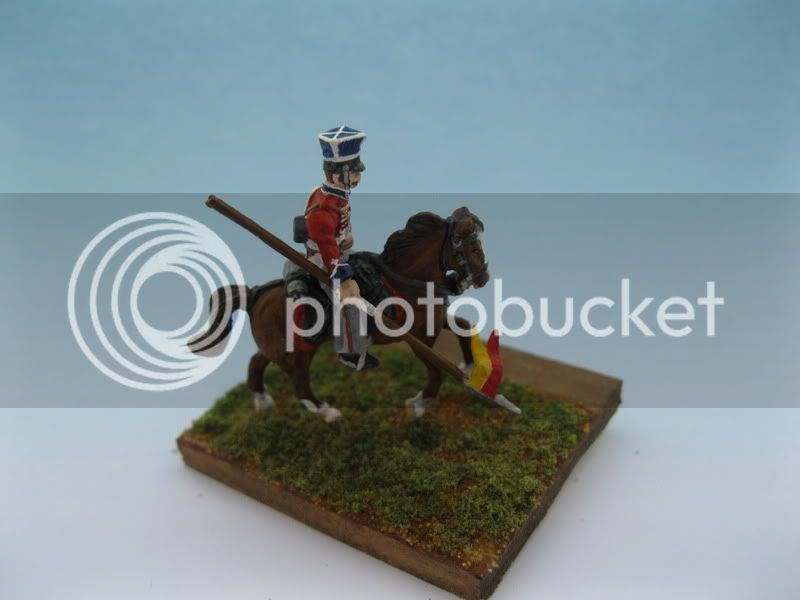 I had that figure laying half way painted in my cabinet since last October. To be honest, I just wanted to get rid of another started figure. I stopped painting it when by painting the Brunswick lancer, I recognized how ugly this rider really is. If you take a closer look at it, you will see that the sculptor has missed to give that dude an appropriate face. Additionally, the right arm looks a bit too large in comparizon with the rest of the figure. Well... not a beauty, this miniature.

But at last, I got another started work off my desk and filled my armies with another not so common unit. Fair enough. And now back to my other projects - I still have Italian hussars and Westphalian cuirassiers in an advanced stage of painting...
...and a bunch of Hanoverian infantry as well...

A short trip to wherever

I'm currently tying loose ends - or in other words: I try to finish things that I've had laying around for quite a long time. Luckily, this means I finish more things then was usual in the past few weeks.
So today I present you a couple of Westphalian voltigeurs (7th line infantry regiment) - the only ones that I found pictured in the double-breasted uniform. 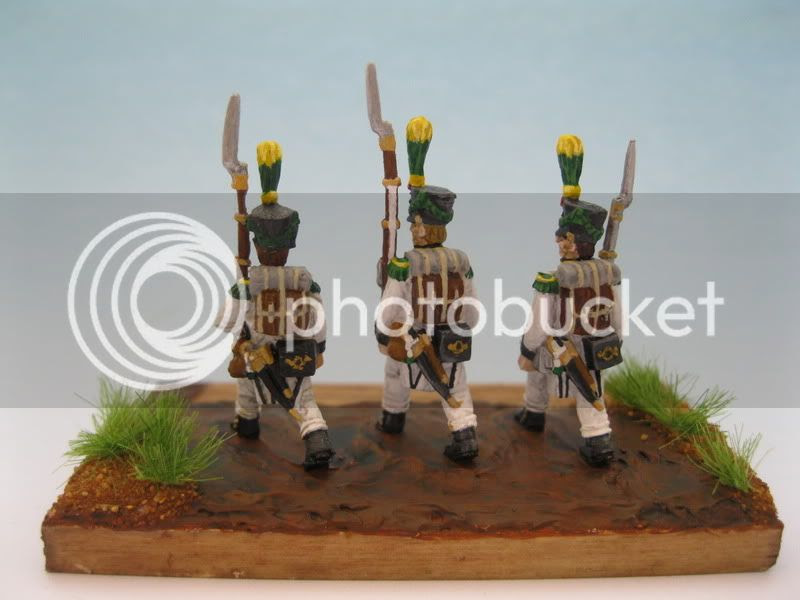 I would have made a label for it - unfortunately I'm having a problem with my printer. So the space remains empty for a while.
I have had these figures on my desk for a couple of weeks. Originally, I just wanted to add some buddies to the guy on the right side. I've painted that one nearly a year ago, but as it was the only Westphalian in that uniform, it would have made a poor display. Well - finally I have made it.

Next step will be a piece of cavalry that layed half painted in my cabinet for months.

One of the units that are badly missing in our hobby are Prussian cuirassiers.
For some strange reason, we only find Prussian hussars, dragoons and lancers in plastic - and apart from the 1815 Prussian hussars, I personally find all of these sets ugly or inaccurate (especially the Italeri dragoons and the new HaT hussars are top-ugly in my opinion). Nobody seems to have cared about the Prussian cuirassiers.

Why is that? I only found some manufactured by ART miniatures, but these are made out of lead.
After doing some research, I think it's because the history of the Prussian cuirassiers. During the army reforms that followed Prussias defeat in 1806, their uniform changed to a version similar to the Russian dragoon outfit. But with Prussia being literally bankrupt, it couldn't afford to equip its' cuirassiers with cuirasses - so during the 1813 campaigns, they went into battle without shining armour.
In 1814, on the road to Paris, they were able to equip themselves out of formerly French stocks. So after that time, they wore the cuirass, which changed in design in 1815...

...apropos 1815: the cuirassier regiments were not present on the fields of Ligny and Waterloo, because they (and the Prussian guard infantry) were assigned to a different army corps that was to take care of Napoleons armies if they had marched further to the east.

So I suppose it's the limited useability that prevented the plastic figure manufacturers to take care of that subject. But there's a solution to it. Look at this: 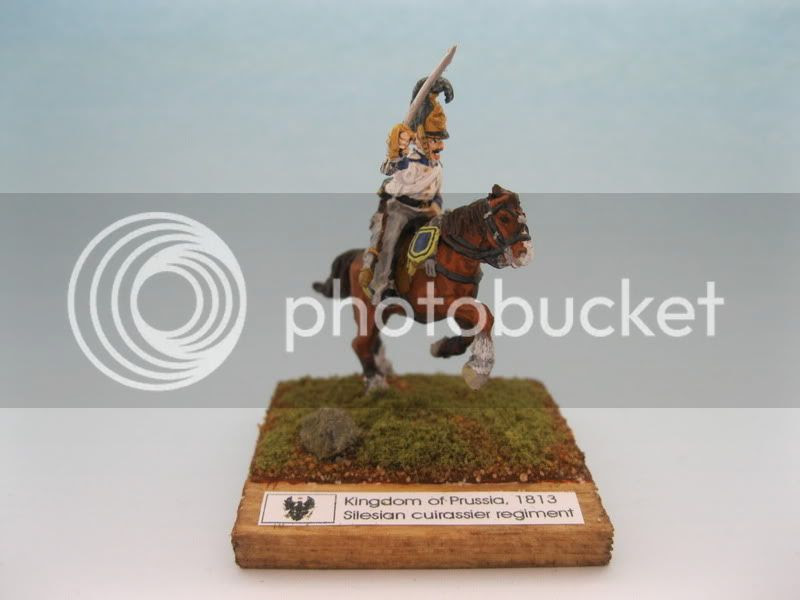 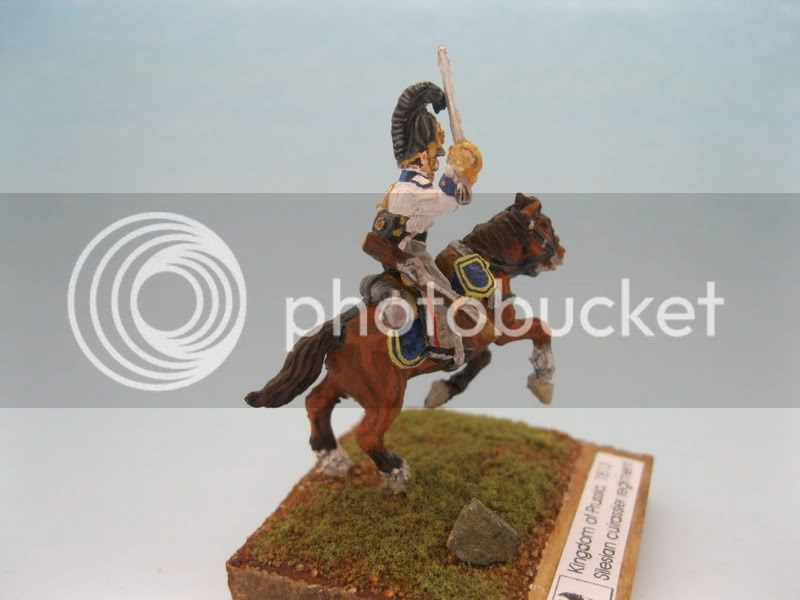 I took one of Strelets' Russian dragoons and lengthened the horse hair on the top of the crest. The horse saddlery was modified with pistol pouches and a rolled cloth - and that's all.
As you can see, one could create lots of 1813 Prussian cuirassiers with little modification work.
I'm a bit unhappy with the horses of this set. They have all relatively bad proportions, especially ath the backside and the head and many have strange leg positions. But the overall outcome is alright, I guess.

So happy April - I hope that you'll see more of new work from me this month.