Oh - there's one last posting that I have to do for this year.
Regular visitors might remember that once upon a time, I painted a nation-specific figure everytime I got a 100st visitor from a specific country on my blog.

I must confess that I haven't had a closer look on my blog statistics for a while. Additionally, my mind was too occupied with other things so I simply forgot. Well - it's time to re-establish that good tradition.
Because of that, there will be some nation-specific postings within the next weeks, starting with:

Well. Is there anything 'Napoleonic' about Canada? Of course it is!
I painted some conversions of US-soldiers for the 1812 war - now it's time to switch to the Canadian side of the fence: 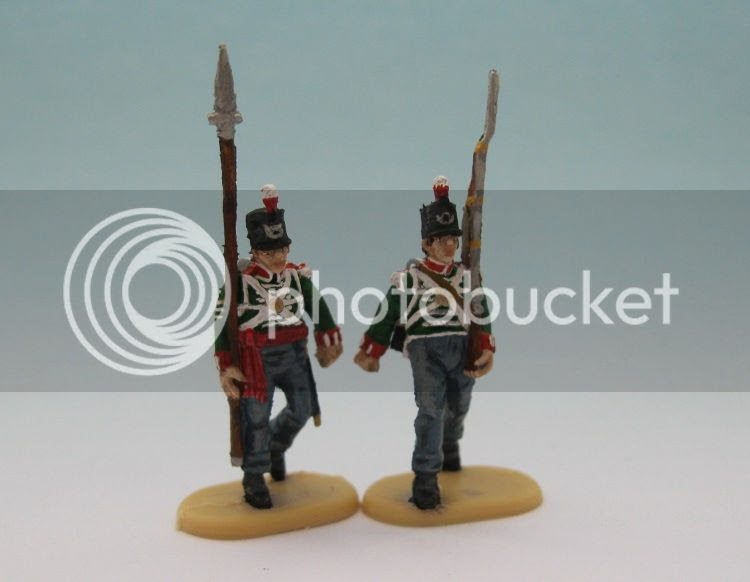 These guys represent the Incorporated Militia of Upper Canada in their early (green) uniform. 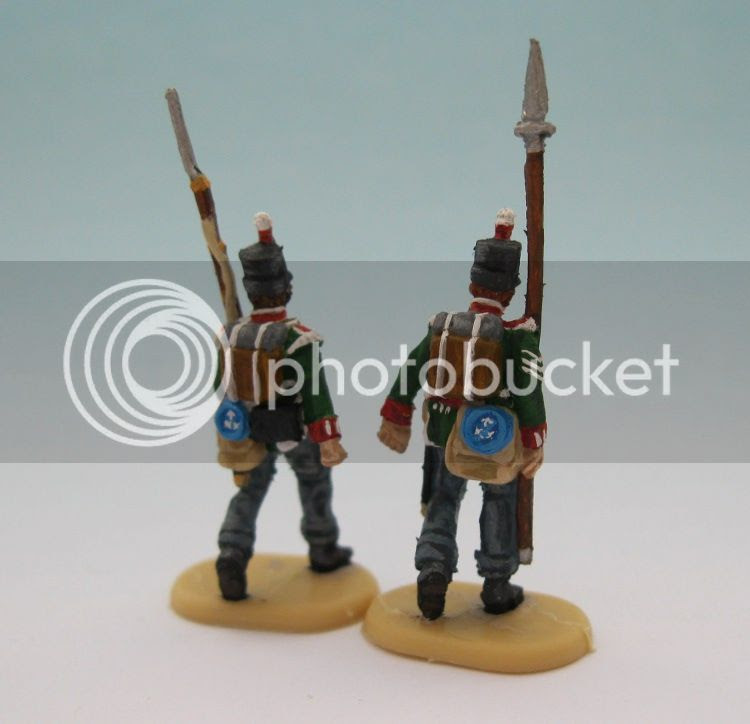 I found these uniforms on this blog, which contains tons of valuable uniform pictures for this specific war theatre: http://history-uniforms.over-blog.com/article-l-incorporated-militia-battalion-du-haut-canada-dans-la-guerre-de-1812-109003510.html

The figures are British Peninsula infantry from HaT. Thanks to Tom for sending me some single figures from that very large set. :-D

May I finish that within 3 days? 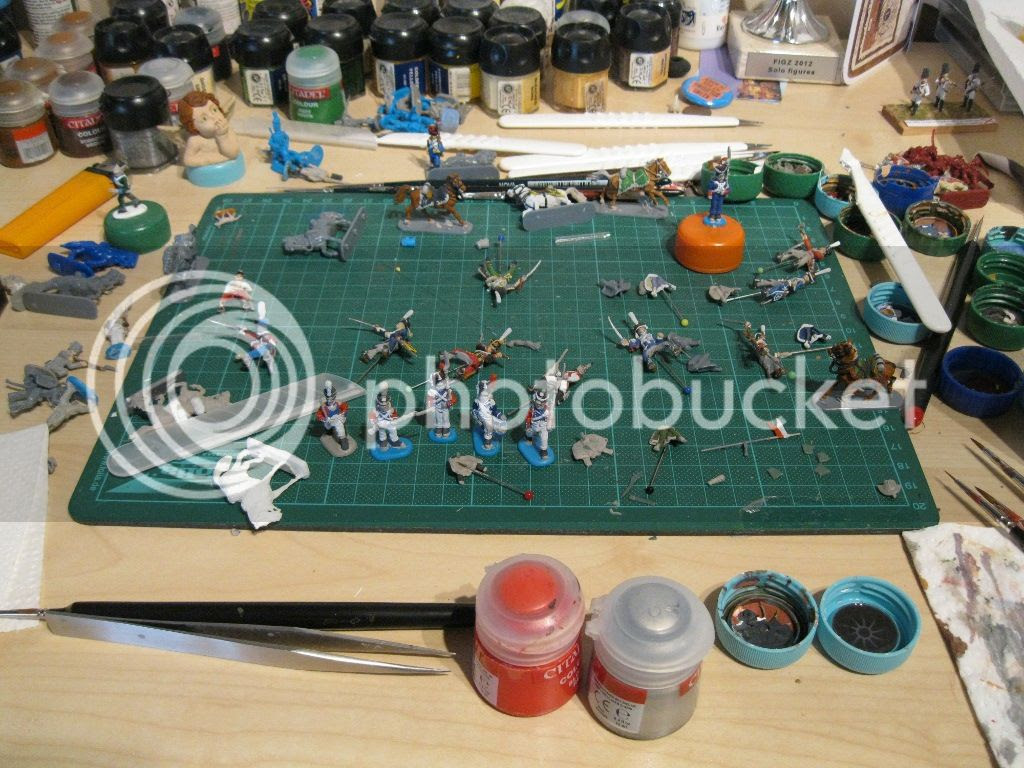 Probably not. I don't know how you guys feel about such things, but it leaves me with a slightly disappointed feeling to see so much unfinished work shortly before the year ends. 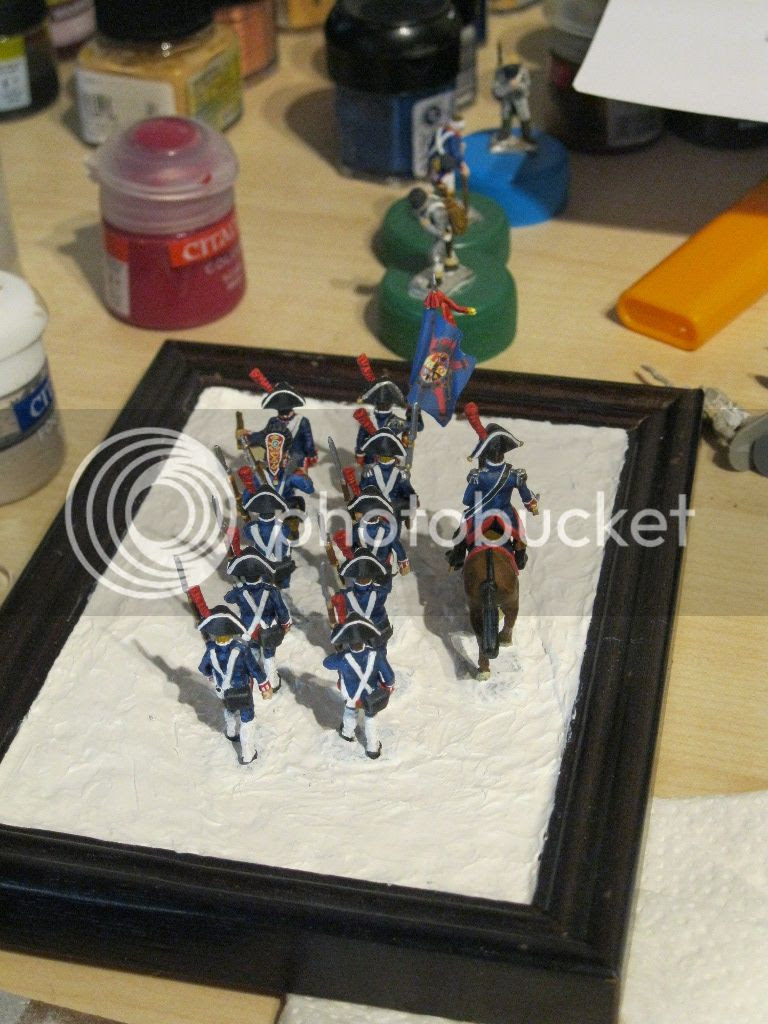 I wanted to bring at least my Spanish Walloon guards onto an adequate base, but it's still stuck in elementary groundwork stage. *sigh* 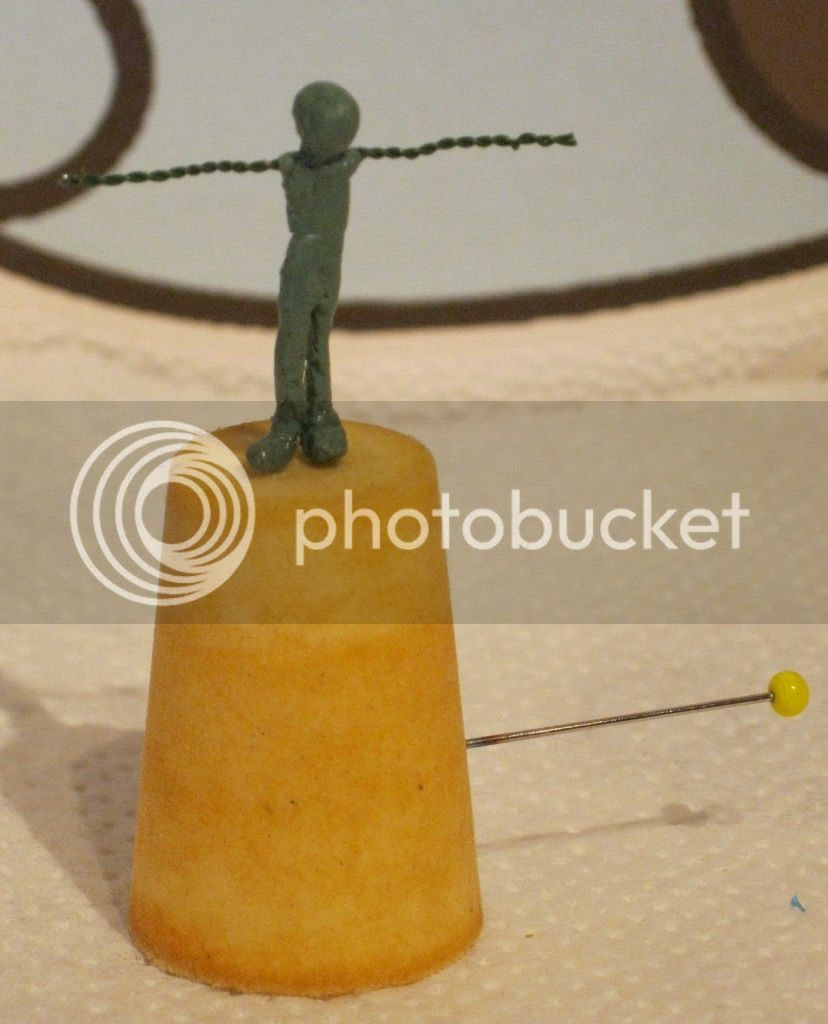 Btw - I made my first experiment with figure modelling. As you can see, it didn't come far. I already got the creeps building that b* wire model. When it was ready, I started with that greenstuff thingy. Well. It is sticky. It is gluey. It is loaded with lots of Bisphenol A. And although I worked in the way mentioned in all those how-to's (including rubbery rubber gloves), I ended up with that... dunno.
It was an experiment. Starting to put the greenstuff onto the wire model, it bend itself into odd positions. Maybe I'll make soe sort of scarecrow model out of this. Or abandon it completely.
Seems not to be my part of the story anyway. X-D

This world ends in 1.20 minutes

Well. Depending on where you are. Or am I wrong?
Dunno. I don't believe in this sh... anyway, so why should I care about all these end-of-the-world-babble, eh?

What I actually know is that it's only three days left until christmas and that the children are already pretty curious for the presents and the xmas meal. So am I - although in my case, it's all about the meals. ;-)

The strange thing is that at this very moment, I cannot show you any new pictures because everything that I've finished in the past two weeks is either already intended for the painting competitions of next year (and yeah, hussars are a pain in the a**, Ben, if you read this - I can fully understand you) or for some special presentation on this blog. Later on - because I still miss a delivery containing two very urgently needed figures. Can you hear me, Tom? *sigh*

So what can I do? I just lean back, make a snapshot and wish you a... 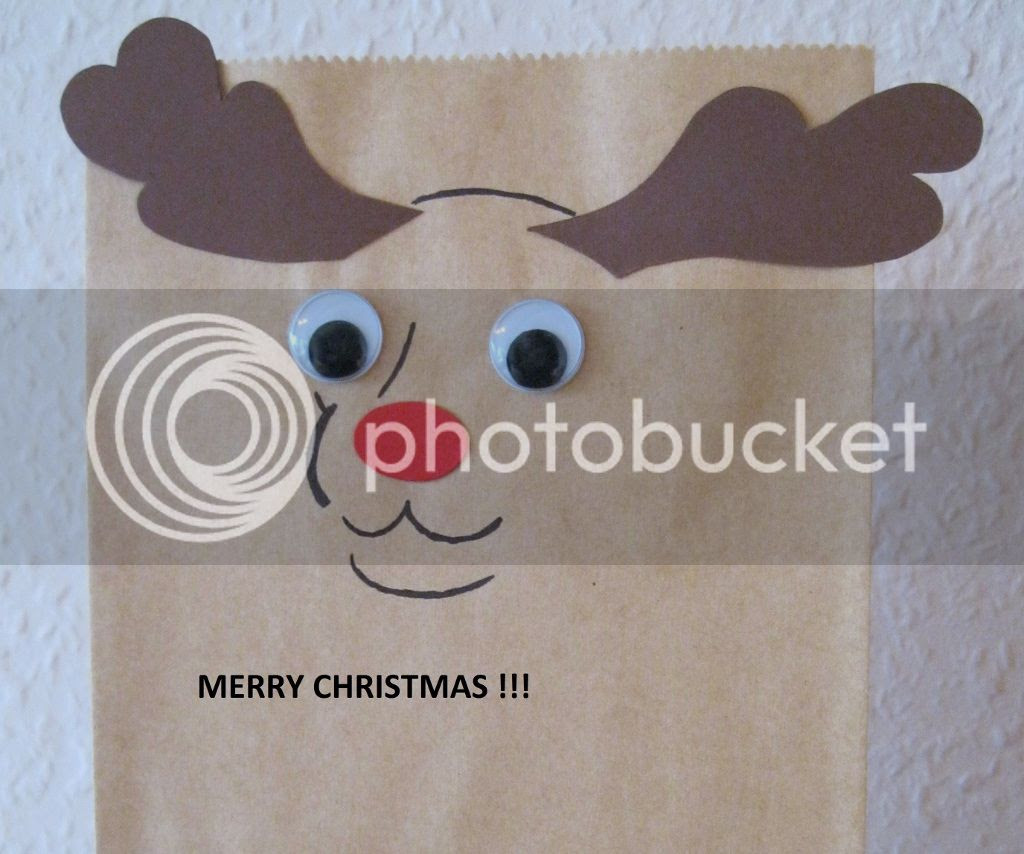 All the best for you and your families! Make a wish and always remember: it's not about getting presents. It's about giving! ;-)
Posted by Zed1 at 1:59 PM 4 comments:

I'm really puzzled. I have had to downgrade myself.

You know - I started that pre-bardin uniform project quite a while ago and since months, I had some unfinished units standing in my cabinet. When I recently decided to finish these units, I faced a strange fact: my painting style has changed quite a lot during the last 15 months. Having a look at the older work of mine, I had to emulate an older, less detailed way of painting.

Strange fact. But I hope the difference is not too obvious. So here they are, finished at the end:
Naples light infantry fusiliers of all four regiments. 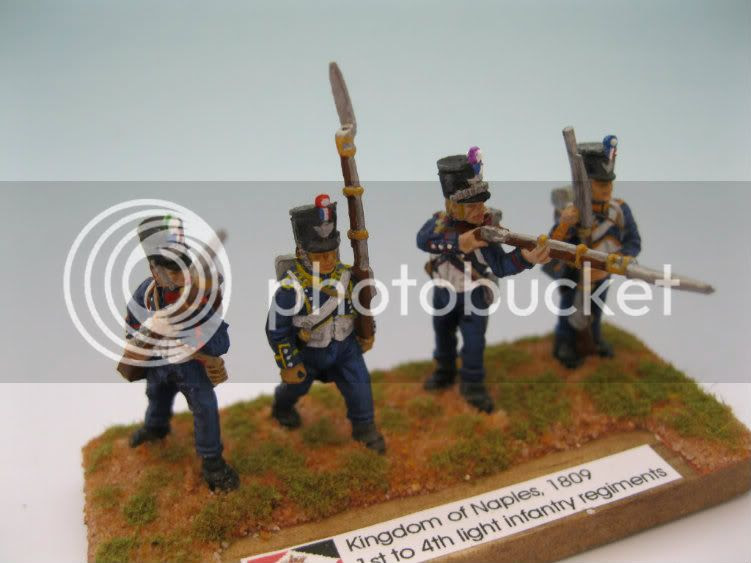 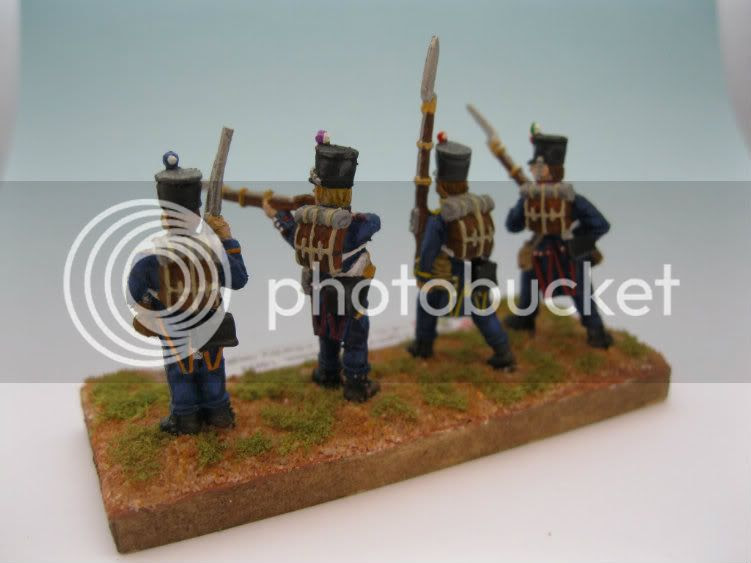 I have also finished the drummer for the Principality of Hannover legion, the last thing missing here is the officer: 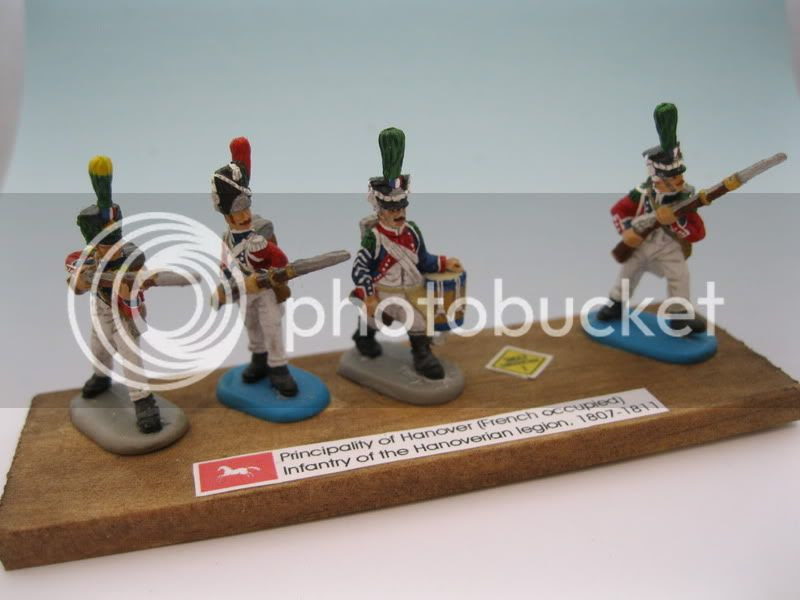 Regarding the Italians, I guess it's better to disband the guards and velites and do them all over again - if I paint the rest of these troops and put them together on the same base, they would look far too different from each other.

This teaches me a lesson: continue the things you've started until they are finished. ;-)

Time is of the essence

Remember the good old computer game 'Dungeon Master'?
If yes, you're something between 38 and 45 years old. ;-)

On one of the dungeon walls stood the motto 'Time is of the essence'.
This is what this posting is more or less all about.

Regular visitors of my blog know that I'm having a long-time project: the ambition to paint all possible units wearing the pre-Bardin French uniform. All on basis of a certain HaT figure set.
(http://zedsnappies.blogspot.de/2011/07/project-all-varieties-of-pre-1812.html)

During the Napoleonic period, besides of many units from all over Europe, the French army fielded four foreigners' regiments. One of them was the 2nd foreigners regiment, the so-called Isemburg regiment. The regiment itself is a very popular one (I've seen it painted many times), most presumably because of its' nice sky-blue uniforms. No question - I had to have them among my troops as well.

Usually, I paint one example of every sort of subcathegory (voltigeuer, chasseur, grenadier, a drummer and an officer). This time, I failed. Why? Because of time.
I simply discovered that you can't paint some sky-blue guys, put them onto a base and that's it. This may work for many different units, but not for this one, because their uniforms changed in an unusually high frequency during the Napoleonic period. In fact, there are four different possible varieties. 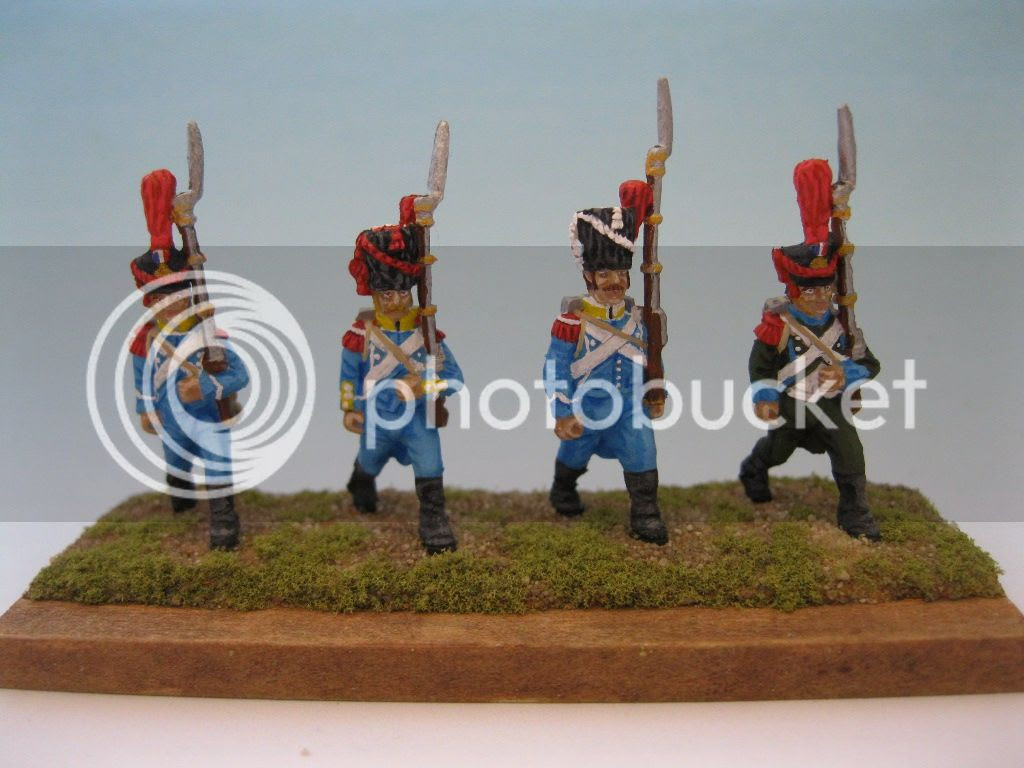 I leave it up to you to find out the subtle and not-so-subtle differences. ;-)

Oh - they've got a backside as well: 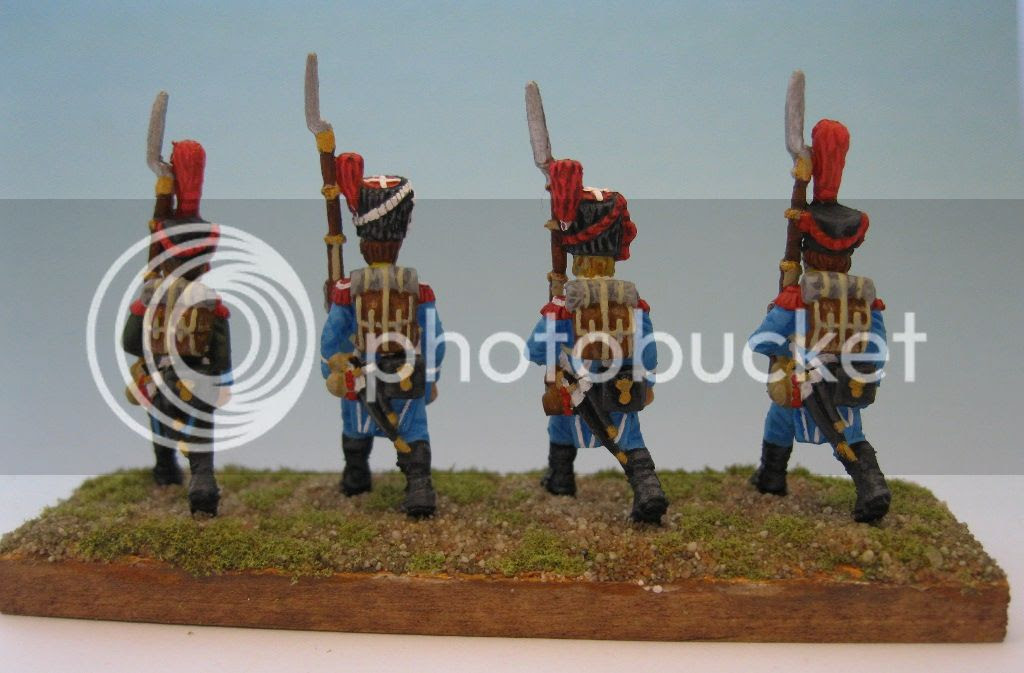 The reason why I decided to paint the Isemburgers in this way (which will in fact result in four different vignettes of that sort) is simply because it shows perfectly how the uniforms changed through time. I think the optical effect works better as if I had made four different bases, each containing a full range of figures of the same temporal period. Or am I wrong with that suggestion? Just give me your feedback, please!