Today, I present you some plastics hardcore carving results. I'm still not finished with my project to paint all possible units that wore the French pre-Bardin style infantry uniform by using the same HaT set - but at least, I'm getting near to finish one of the biggest of Napoleon's allies - the units of the Kingdom of Italy.

Among them, I found two units that brought me to a certain challenge. Both uniforms share a greyish vest/trouser colour that is not that often seen on uniform plates. But what both have in common is the fact, that under normal duty circumstances, they certainly wouldn't have worn any backpacks. So for the first time, I had not only to remove some cords or swap a head, but had to remove a chunky part of plastic that hadn't been intended to be ever removed.

This was pretty challenging. Although the plastic of the figures is not that hard at all, it's a massive block of plastic that has to be cut off. In addition, I chose grenadiers as basic figures, which required a headswap with the fusiliers. At the first try, I underestimated the effect that - when half cut - the resistance of the plastic decreases, which ended with the scalpel blade slicing halfway through the tip of my left hand's thumb. Ouch

But after all, I managed to scrape off the backbacks. You can't just slice it away, you must also try to achieve the overall shape of how the soldier's back would look like, including a little bit of texture which looks like belts etc.
Well - the final result looks pretty nice to me and was worth the work . 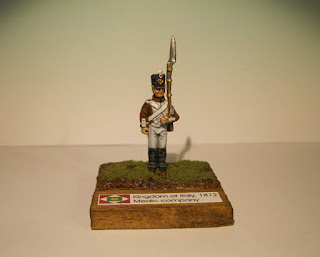 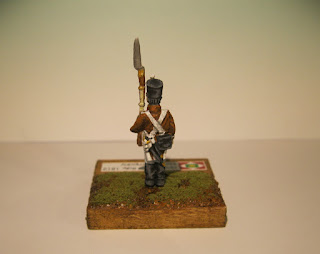 The first example is a soldier of the medic company standing guard - for example while guarding a field hospital. Brown, light grey, white and black... I really like the combination of the colours. In addition, this is a rather unusual subject because you seldomly see units that are not directly battle-related.

When you see this figure from a small distance, it appears as if the backpack has never been there. :-D 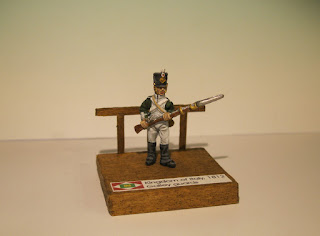 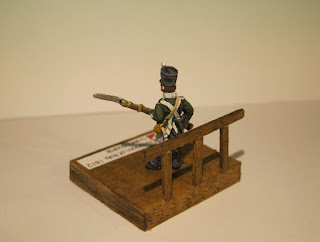 The second one is is a galley guard. These chaps were the sentinels who guarded the convicts who had to row the galleys that some nations in the Mediterranean region still used in the Napoleonic age.
Working on a ship, this guy logically has no need for a backpack at all. So I had to remove it for him as well. In addition I decided to make the base look as if the figure was standing on deck, right in front of the guardrail.

I always liked that green of the Italian uniforms - in addition with light grey cuffs'n collar, trousers and vest, this figure looks really pretty. Although you wouldn't see those guys on a battlefield at all.

In both cases, I wasn't able to find representations of drummers or officers. In case of the galley guards, I found out that they were subordinated to the navy staff of officers and had no own officer's staff at all. In case of the medics... well, I don't know. Maybe someone else might help me?
Posted by Zed1 at 11:16 AM No comments:

Well - I found that it is quite hard to find suitable sources for the different line regiment flags of the US Army of 1812-14. Or maybe I'm just not looking in the right corner of the web? I bought a set of the new Strelets British marching infantry because I like Strelets figures, I wanted to make some paint conversions for the war of 1812 theatre and I wasn't able to get some HaT British. The set contains a flagbearer with a blank flag. Cutting it off in order to replace it with a printed flage would have looked silly because of the flagpole's thickness. 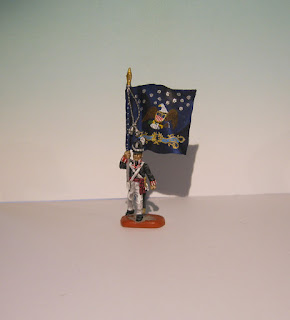 So after not being able to find the original flags for the 16th regiment of the line, I decided to get along with a very generic flag. Maybe you guys could tell me if that's alright or if it is problematic for a reason? Who knows how the regimental colours have looked like? Is there any good source on the web? I'm happy for every help!

I'm still there. Don't panic. Not that I haven't painted something during February, but it was all too diverse and too many things still lay on my desk. I had been experimenting for a while, which was the fact that kept me from completing many things. Today, I have some snapshots of what I'm currently working on and that's:

Soldiers of the British/US war of 1812

Some may say: pretty unusual stuff for someone who lives in Europe. And yes, that's right. European history has Napoleon and his wars so much in focus that you don't read much about the things that were going on in northern or southern America during the 19th century, except from the well-known American secession war, some WildWest-stuff and (if you're lucky) the Alamo (as if that wasn't just a single battle). Not to speak of the liberation and unifications wars on the Southern American continent... (total blank in German schoolbooks)

Well. Research on that matter wasn't as hard as I had expected. And due to my surprise, I found a hell of a lot different uniforms. In fact, back in 1812 even the US Army hadn't adopted a completely uniformed appearance. From grey to brown to blue to black to fawn, in the beginning of the war there was a large number of uniform colours to be seen even in the regular regiments, not to speak of all these militia units that were sent by the different states.


One thing that makes it fairly easy to make up an army for the US/British war of 1812 is the fact that both armies used pretty much the same sort of uniform and equipment. Differences, as for example the backpacks that looked different in US use (or were just the same backpacks, but covered with blue cloth that often had a 'US' or state mark on it), can be easy emulated.


I had seen on the pages of Hagen miniatures that they offer a range of British soldiers in colonial uniforms for the early 19th century campaigns. As many units, especially in the early phase of the US/British conflict, wore these hats as well, I thought that these figures could be a good basis for my little '1812 tryout'.


At first I found out that these figures are not as hell of a much detailed as the Rifles from Hagen were (see on the right side, you can use them as light infantry (i.e. the Glengarry regiment) as well). But thinking about it again when I had the first ones painted, I don't think that this matters much too much.

First: these are still very nice metals. Not chunky, not clumsy, though not too crisp. But they have their details where you need them and will surely make a great appearance in masses on a wargaming table or in groups on a diorama.

Second: their uniforms aren't that splendid anyway. For many units, you need to trim away all the laces, slim up the cuffs, cut away the plumes etc., so all that's left is more or less a very blank uniform.


So do these figures do their job as War of 1812 militia? Yes, of course they do. And as a Napoleonics enthusiast, I can only recommend other miniature painters to give that theatre a go because what I show you here is only a slight piece of the mass of different units you could paint.

And there's a lot to be learned about the early years of US/British policies and to what this war (which is not even that much noticed in the USA itself) led concerning the development of the USA and it's neighbours.
Posted by Zed1 at 6:50 AM 4 comments: