Another year is almost gone. :-)

Not much left of 2017. Time to make a personal figure check up, eh?
I hope that you all had enjoyable holidays and that your year was good, as well.

My year was pretty cool. It started with playing a background role in an opera (no singing involved, luckily), starting an interesting assignment at a lawyer's office, then quitting again when a far more interesting opportunity showed up in September. Changing my job twice this year, acting at the opera and writing my second novel took plenty of time. This resulted in far lesser blog entries this year. Nevertheless, I still enjoy miniature painting very much.

I have finished one figure setup for my long-term project recently. It's the command figures for my Isembourg regiment. 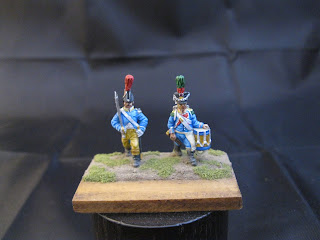 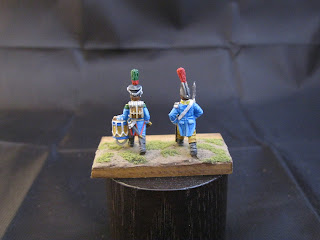 There's some stuff that I have painted this year but haven't presented on the blog yet. This is mainly because I haven't put them onto bases yet. I'm not quite sure how to assemble the war of 1812 american infantry. For example. But time will show. Or better said: I'll show them to you when it's the right time. :-)

Plans are:
That's not quite a lot. I guess it's better then starting with ambitions that I - as every year - won't be able to fullfill.

More men behind the lines - the Gardes d'honneur

When I discovered the departmental reserve troop system, I had already stumbled accross the Guards of Paris as a unit. In one of them articles, there was a remark that 'they had been in larger scale, what the honour guards had been for the smaller cities'. So I started to find out what that meant.


During my research, I found an old book on the public database of the Toulouse biblioteque. (Book: Gardes d'honneur)

And there they were - a whole lot of new uniform pictures that I had to put into my Pre-Bardin-uniform project, which backlashed to more then a hundred uniforms yet to be painted. 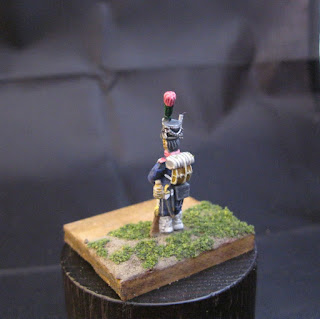 Large cities had to setup such guards for the means of internal security. They served as protectors of the cities' officials and the city infrastructure. They guarded roads and streets as well as public public buildings. Larger cities tended to have their own city guards since medieval times. Under Napoleon, they mainly had these guards because the larger cities had the financial capabilities to pay for their security on their own accounts.

And as long as they had to pay them all by themselves, the city officials were relatively free to decide about the look of their city guards - not the equipment, which was same as it was for the standing army. Some of these uniforms looked really flamboyant, while other cities decided to put their men into rather conservative coloured cloth. 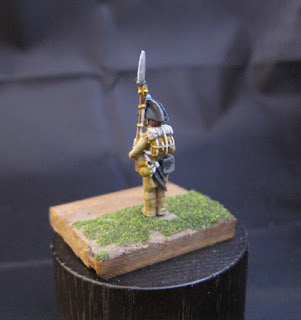 By the means of battle readyness, one might consider these troops as militia. I haven't found much evidence of city guards that were placed on the field in a real fight, except when their cities came under siege.
Posted by Zed1 at 10:38 PM 1 comment:

Paris, being the heart of France, always had it's very own guards. After the revolution, this guard went through several stages of organization, slowly deteriorating in men and functionality in the latest years of the 1790s. Therefore, the Garde municipale de Paris (or 'Guards of Paris', as I'll call them from now on) where created by personal decree from Napoleon Bonaparte himself in 1802.

Members of this troop had to fullfill some interesting criteria: they had to be between 30 and 40 years old, more then 1.65m tall, able to read and write and (!) they should have to be involved in at least five army campaigns. In other words: the Guards of Paris where not some background police dudes hanging around, they were real war veterans.

Their duties were the same as for the Gardes d'honneur in major cities or the Departemental reserves - they were responsible for inner security, guarded governmental infrastructure, patrolled in the streets, guarded prisons, city gates and protected governmental officials.


The Guards of Paris were organized in two demi-brigades, totally 2154 men strong.What is a bit tricky about this unit is the uniform documentation. Due to several sources claiming this or that configuration for the same time frame, it's a bit hard to say how the uniforms really looked like at this or that time. Although the general colours are of no doubt at all, this problem mostly is about cuff shapes and bearskin/shakos. Therefore, I had to decide for a certain variation in case of the tirailleur/voltigeur figure. 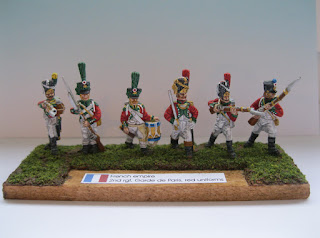 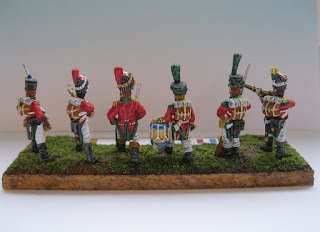 The basic uniform colour of the 1st regiment was green with red cuffs'n collar. The 2nd regiment wore it's uniform with the same colours the other way 'round. For the drummers, I basically found two versions: the one with the golden rims and the reverse-colours version. Well. 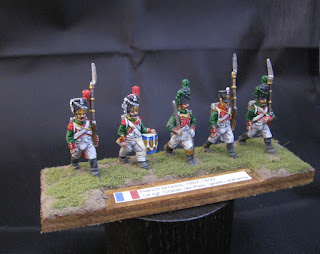 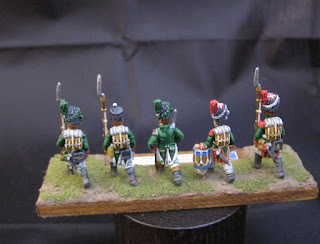 In 1806, both uniforms received white uniforms. Sitting at the center of the distribution chain, it is confirmed that they really got those uniforms. The distinctive colour of each regiment - red or green - remained. After the white uniforms were abandoned, they switched back to the old ones (what a waste of money, eh?). 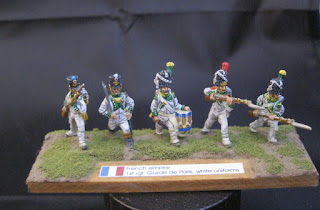 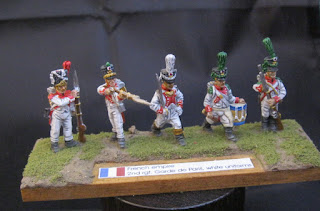 What makes this unit interesting for wargamers is that here you have a 'militia' or 'city guard' unit with veteran status. Plus it makes a bright and colourful appearance.