Here's another unusual unit represented for my Pre-Bardin-uniform project. It's a soldier of the Veterans of Rome.
I found this uniform in a book filled with old Knoetel uniform plates. Napoleon annexed the Papal States in 1810, following a number of disputes with the pope. At this time, the Papal State army was considered to be the most worthless of the continent. Whoever was found worthy of serving in a regular unit, was transferred to the regiments of the Kingdom of Italy. 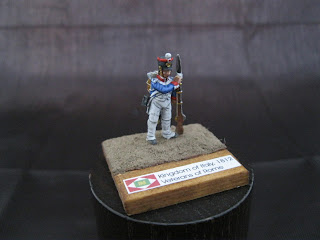 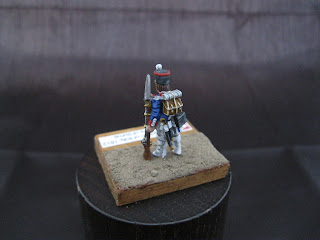 However, there was still a bunch of men left - and as it was considered to have these people rather in a uniform and under some sort of control then having these men roaming the streets, the battalion 'Veterans of Rome' were raised as a military unit for local security purposes.

If used in wargaming scenarios, I would say that this unit is merely militia with a minus on morale and combat abilities.
Posted by Zed1 at 10:07 AM 2 comments:

In 1808, King Louis Bonaparte, ruler of the Kingdom of Holland by the hands of Napoleon Bonaparte himself, made a decision to raise an infantry unit exclusively from the jewish population of 'his' country.

The unit raised up to regimental status, although it suffered from never getting enough recruits. It was dressed in the same uniform as the 2nd light infantry regiment - the only difference was the shako plate, showing the letters 'CI' for 'corps israeliten'. 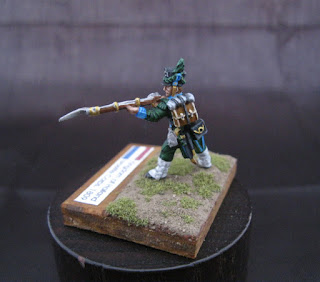 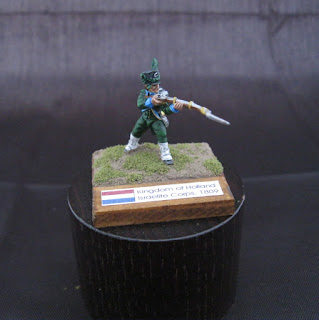 I wasn't able to find out what the main reason for creating this unit really was - some write it was because of the special jewish nutrition, some write it was all about promoting jewish citizens' rights. Whatever it was, as far as I was able to find out, the Israelites Corps never saw actually any battle and was disbanded in 1810, it's soldiers were put into other regular infantry regiments.

Because of this short lifespan, the regiment remains one of the oddities of the Napoleonic era, although all-jewish regiments had already been in service in Russia and Poland in the late 1780s. Receiving citizen's rights due to the Napoleonic juristictional reforms that took place in many French dominated countries, jews began to join the armies, although it seems that not many of them were actually recorded. Or perhaps it was something that noone ever documented very well.

When Prussia joined the Coalition forces in the liberation wars against Napoleon, jews had been given citizen's rights in Prussia as well. This led to hundreds of young Prussian jews joining the army, although an exclusively jewish unit never had been established.

I find this matter really interesting. In the archives of the 'jewish history' of the city were I grew up, you can find this picture: 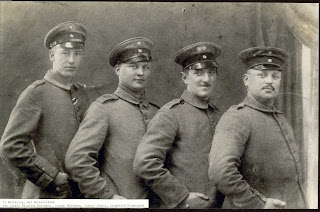 These are jewish citizens who fought for the Kaiser during WW1. The man on the left must be a NCO who has been decorated with an Iron Cross. In fact, thousands of jewish men fought on the German side during the first world war. They were as patriotic as their christian comrades were and the merits they earned during the 'Great war' later led many of them to the fatal mistake that even a Nazi government would never commit atrocities to the former brave soldiers.
Posted by Zed1 at 11:30 AM 4 comments: