I had to play a bit. Back at Heiden, I got a set of Zvezda Russian hussars. Formidable figures, yes - but painting hussars is so... time consuming. Especially because unlike the Prussian ones, these have detailed saddlecloth that requires to paint very fine lines. I suppose that this specific little project will cost me several months. Maybe it's going to be a work worth entering the competition at Heiden 2013, but it will certainly take a lot of time.

Therefore, as I said, I had to play a bit. Experiment conditions: complete a mounted rider in under 3 hours.  The result is a quick-painted Naples cuirassier: 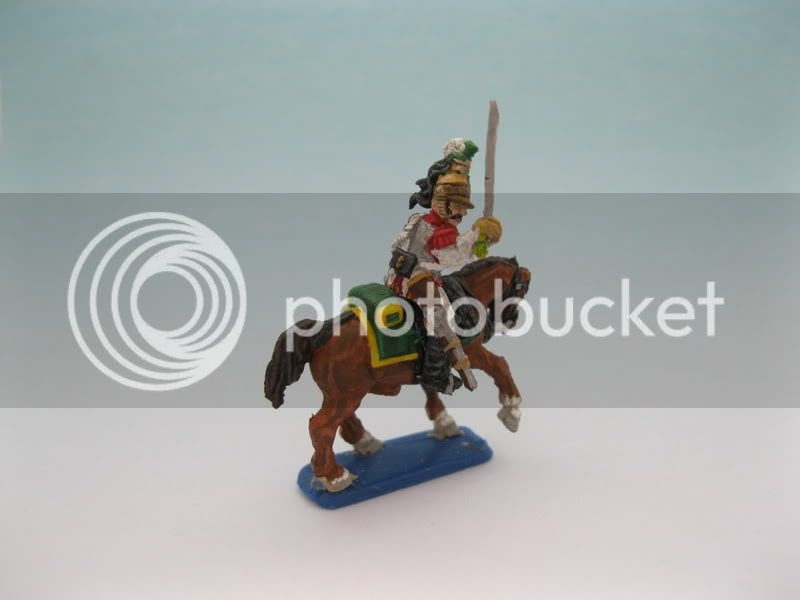 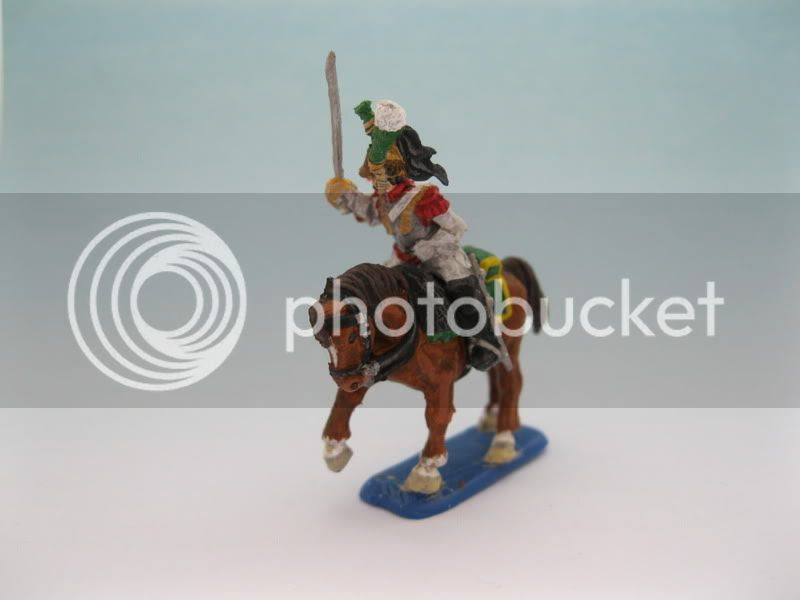 Nothing spectacular, I know. But well enough for the gaming table and a little relief to see that I have finished something. Having a handful of long-run projects on the list now, I need something like that feeling every now and then. ;-)

Btw - I have finished that Dorsenne guy from the Strelets dismounted French staff set. It's the guy with the sceptical face on the right side of the picture. That's one of the figures which went on and off my desk for months until I finally had the nerves to finish that bloody golden stuff on the backside of the uniform. 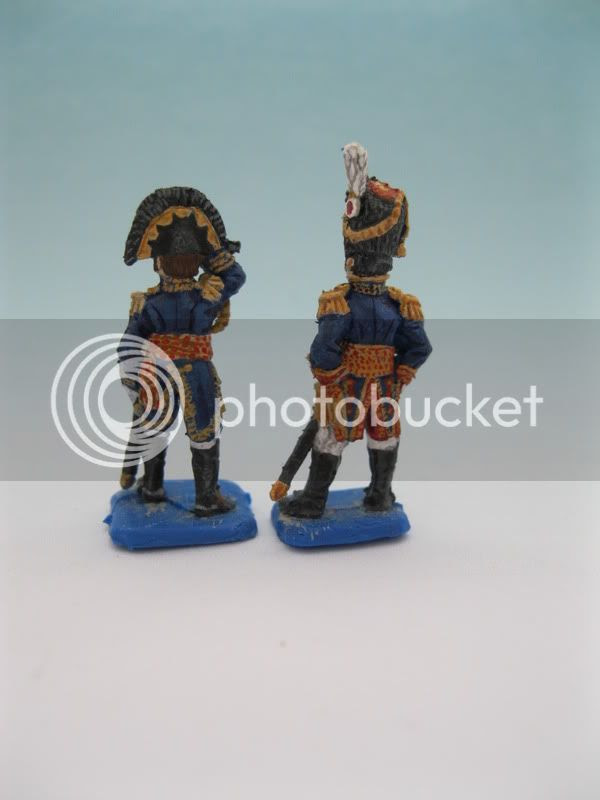 Yeee-ha! I got a little item letter from the USA this morning!

Thanks for the great support, Mr.D. - the Spaniards have landed right on my desk today. What does the envelope contain? Test shots of the forthcoming Spanish grenadiers and Spanish light infantry for the early stage of the Peninsula war!

I already got some sprues of the command set and line infantry which I presented you earlier on. Now I like to share with you these great new figures while they still are unpainted on the sprue: 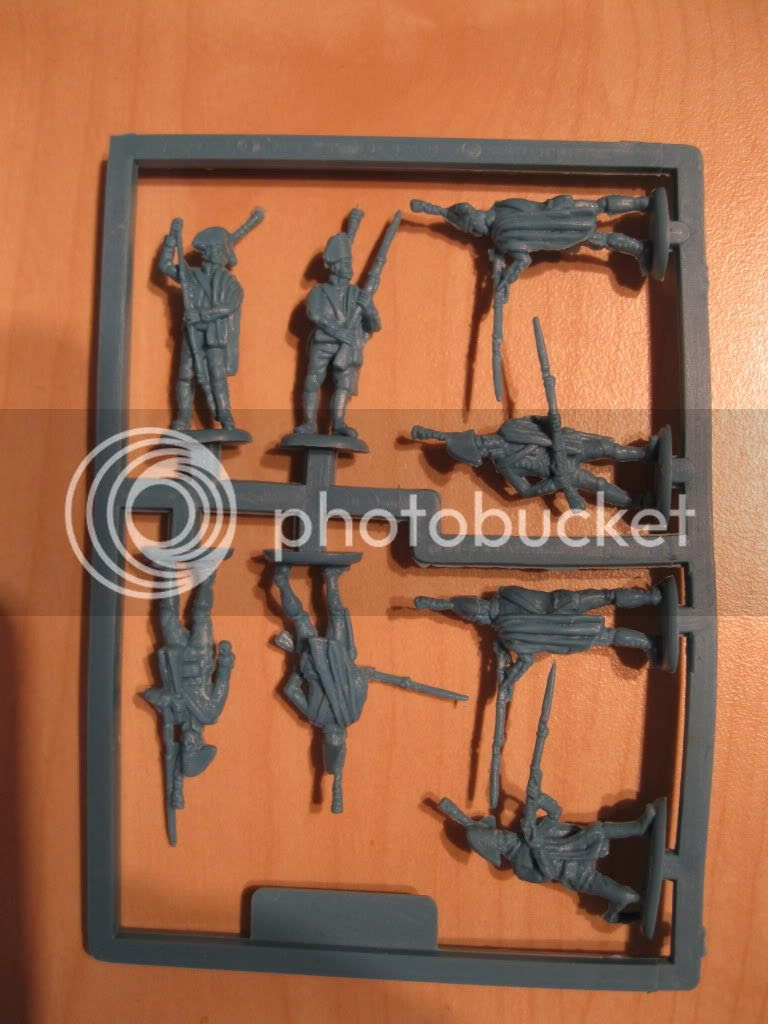 As you can see, poses are more or less a standard issue. Plastic is, again, of medium flexibility, which is so far okay. Personally, I especially like the reloading grenadier a lot - and I find it quite funny that the grendier on guard looks exactly the same way as the convertion that I had made. :-D
The figures are of the same sculpting quality as we have seen on other MAC sets, with only a little flash to remove, especially at the mouldline. By the first look, I'm feeling very fine about them.

The people that saw me painting at the ISSC in Heiden may have noted that I had the light infantry command figures on my desk. I decided to paint them in the colours of the Barbastro light infantry regiment. 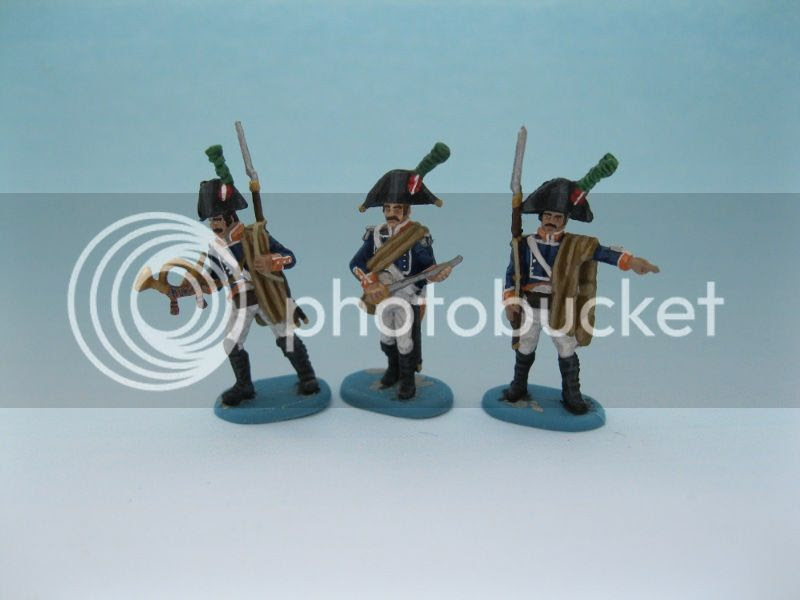 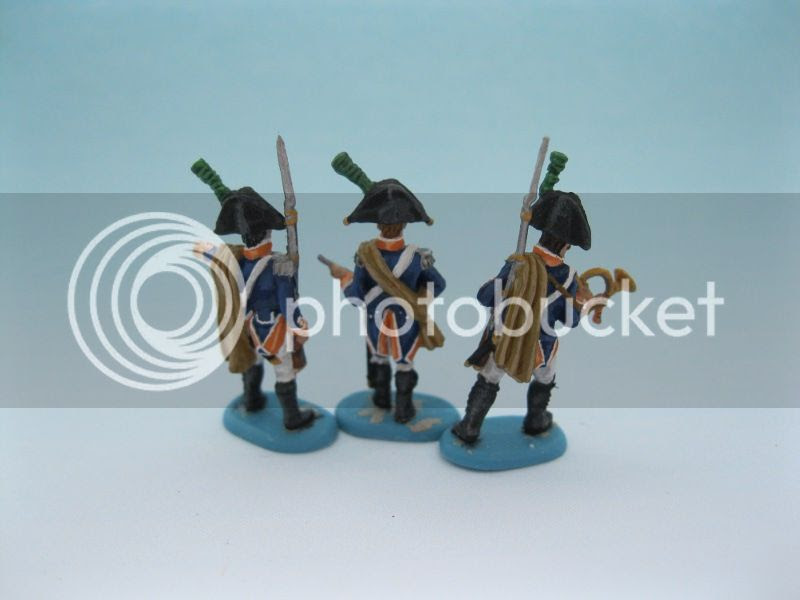 A more quick-painting oriented approach, I know. As the setup of light infantry figures shows a quite dynamic team of soldiers (except from the marching guy perhaps), I have decided to paint the soldiers in the colours of the same regiment and then arrange them in an action-oriented vignette. We will see.
For the grenadiers, I still don't know - I have a couple of nice pictures for different regiments, so I guess I'll paint them up in different dresses.

Which brings up the old dilemma again - now I have two diorama ideas, a single figure vignette in ground work stage, two single figure vignette concepts, a couple of great Schilling tin miniatures and a long-run project that suffers badly due to the fact that god ignores my request for prolonging the standard daytime to 48 hours. M-)

...did I mention that there's a complete Prussian foot army in my cabinet, waiting to be painted?

I'm back from the small scale convention in Heiden (http://smallscaleconvention.jimdo.com/) - what a great day it was! You can see a lot of pictures of that show on http://www.bennosfiguresforum.com/viewtopic.php?f=10&t=12472, including a short report from me. Have a look at it - those pictures are worth a look.

Not only that I found enough time for painting and chatting with great miniature artists, I was also able to buy the figures for my next big painting projects - thanks to Thomas, who found the required hussars for me and to Mr.Schilling who now produces the French army on retreat from Moscow (see them on http://www.zinnfiguren-schilling.de/).

The SSC at Heiden is an event that hopefully will take place every year from now on - a well-balanced mixture of sellers and miniature artists where you can see much inspiring modelling and painting work in small scales. Really worth a visit. On the other hand, this means that the contributions for the painting&modelling contest were mostly masterclass. Well - it was impressive to see such great work and then notice my own humble paintworks standing among them. And this is the point where I have to give you some explanations and start doing some promotion.

Back at FIGZ in Arnheim, the magnificient sculpting artist Francesco Messori gave away some test sprues of his work to members of Bennos' figure forum - including me. By luck, I received a sprue of Naples staff officers and two sprues of French line lancers. In fact, Francesco has created some great figures (see more of his arts on www.franznap.com), but that special cast went wrong somehow - the temperature, the pressure... whatever the reason, the result was really not the best - the sprue, made out of a sort of resin, that became really brittly during the process, was a complete web of plastic. So freeing the figures required a sharp surgical scalpel, the loss of some blood and lots of patience.
Whatever. I did all the best that I could in order to set these beautifully sculpted figures free and then give them a good paintjob. Because of the lack of free time, it took me several weeks.

In addition, I could not post any photos of this work - because I wanted to put them into the competition in Heiden as I promised it to Francesco. But now the time has come. Ladies and gentlemen - I hereby present the incredibly beautiful figures of Franznap! 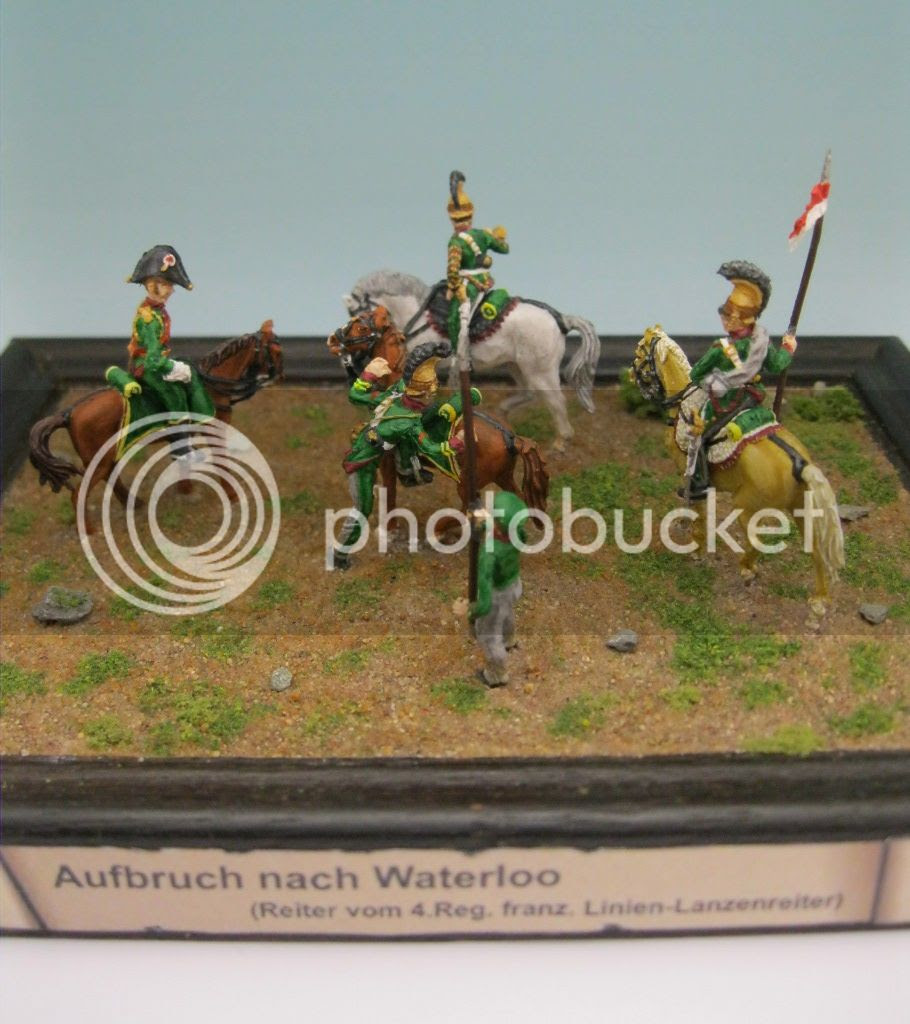 These are French line lancers. Many figures are casted with separate arms, which gives you the possibility to create a great variety of poses. I swapped one troopers' head with the bicorne-wearing version and positioned the soldier in front as if he is holding the lance for the sergeant who is currently mounting up the horse. The complete set contains a lot more figures, all in different poses. So just take these pictures as an example how a diorama with the complete range of figures could look like.
Well - I did the best I could. For what was a 'terrible test shot' the result is very pleasing (although the competitors in this cathegory were much too strong for me. ;-) ).

The other set of which I received some figures, were the Naples staff officers. I would have loved to have more of them, you can bet. After a similar amount of carving, I decided to paint up a group of three and make a small vignette. Here's the result: 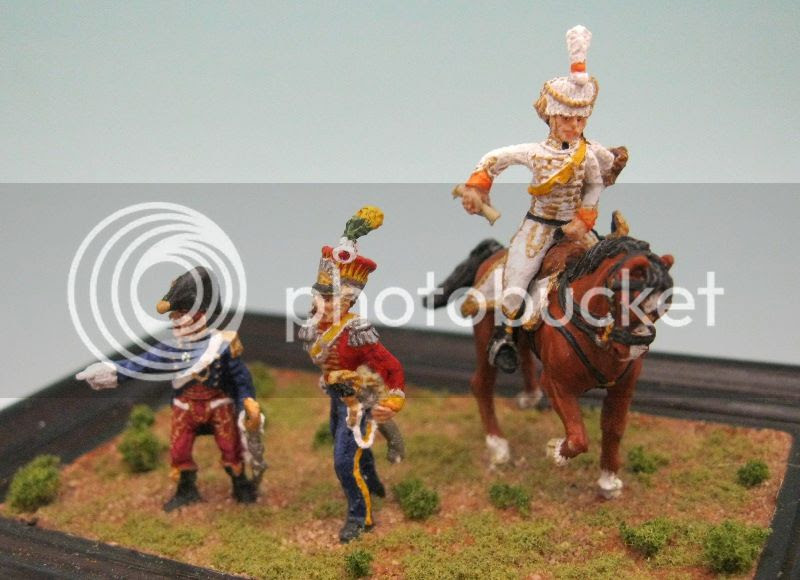 Among all military of the Napoleonic age, the uniforms of the Kingdom of Naples belonged to the most colourful and flamboyant ones. These figures are extraordinarily well sculpted - note the different body sizes. Most times, all figures within a set have all the same size, isn't it?
The complete set contains - as far as I know - ten different figures. You can see them on www.franznap.com in the section 'sculp&cast' under the subcathegory 'Neapolitan General staff'.
I can only say that research for correct uniforms and painting these figures was pure fun. And guess what? 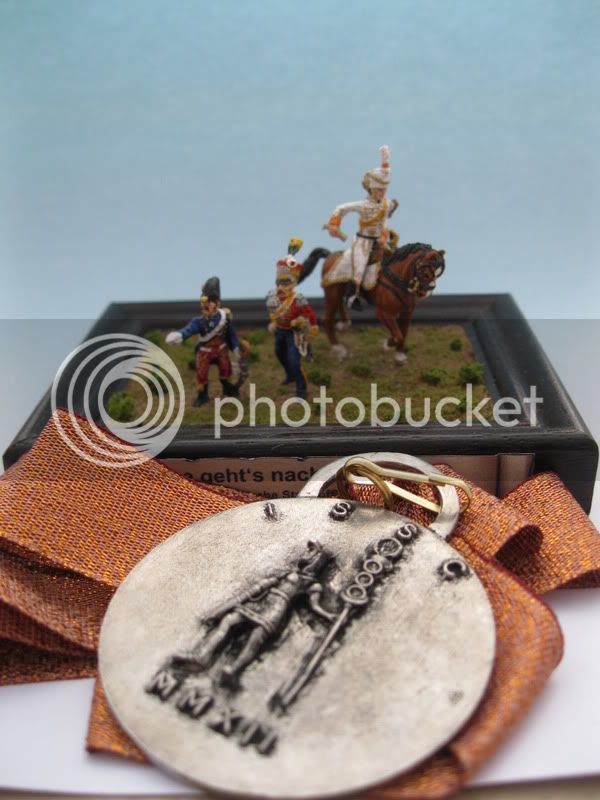 I was lucky. Bronze medal in the cathegory historical single figure/vignette standard.
Francesco - consider your figures being award-winners.