'The four horsemen' are ready!

Great. I have finally finished them: 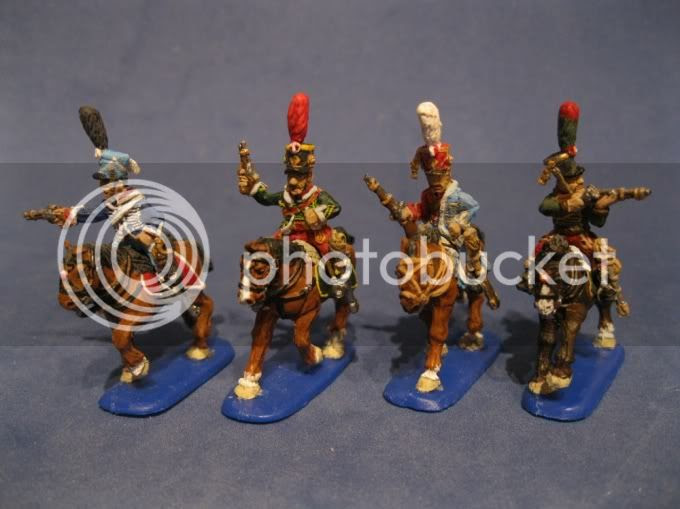 Such a short time ago they were just ugly blue thingies laying in a plastic box - and now look at them! Ah - I love those Strelets figures, they are simply nice.

So I have again updated my hussar project thread. Not only with a Baden hussar created out of a Strelets figure, but also with another 1806 HaT Hussar painted in some veeeery naughty colours. See them here: http://zedsnappies.blogspot.com/2011/07/now-its-also-hussars.html

I hope you enjoy them!

I'm a fan of Strelets figures. I know that many people aren't, especially because of the chunky and somewhat comic-ish style of these figures - but as I'm a fan of comic-style results, I simply love them.
At the time I bought these four horsemen, I also buyed the infamous set 013, Napoleons General Staff.
This set includes a wide range of dismounted generals, marshals, officers and other figures, like for example the great army band which I painted in the colour of the Isembourg musicians (http://zedsnappies.blogspot.com/2011/07/project-isembourg-regiment-band.html).

Well - I have now painted a handful of the other figures as well and would like to show them to you here on my blog. So fasten your seatbelts, here we go...
...and maybe I complete this set one day... ;-)

The grenadier general has been painted as an officer for my Dutch guard grenadiers... 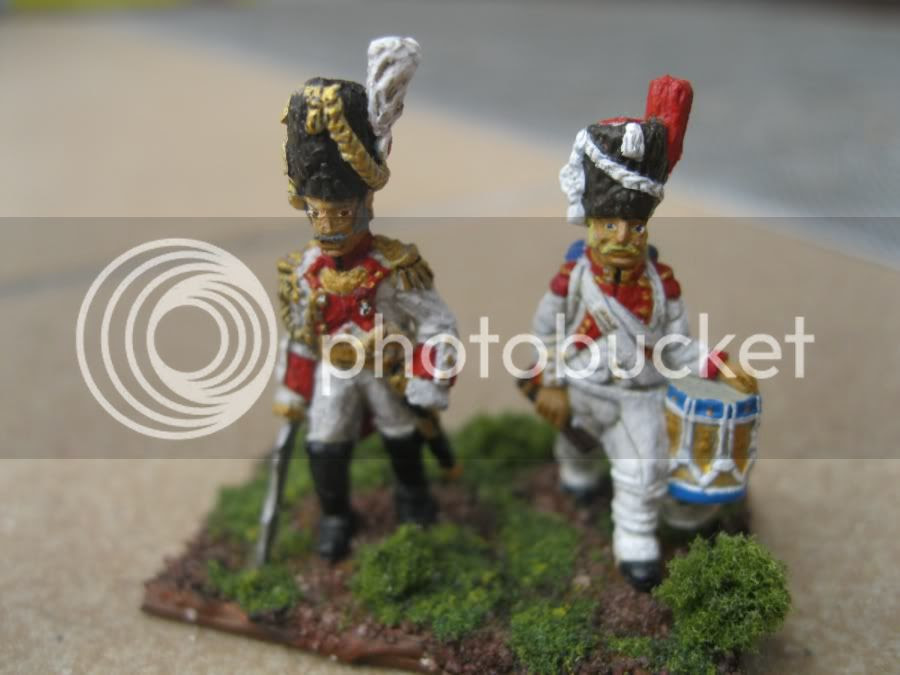 ...unfortunately, Strelets forgot to give this guy a nose, so it looks somewhat stupid, doesn't it?
Luckily, they at least gave a nose to Marshal Lannes: 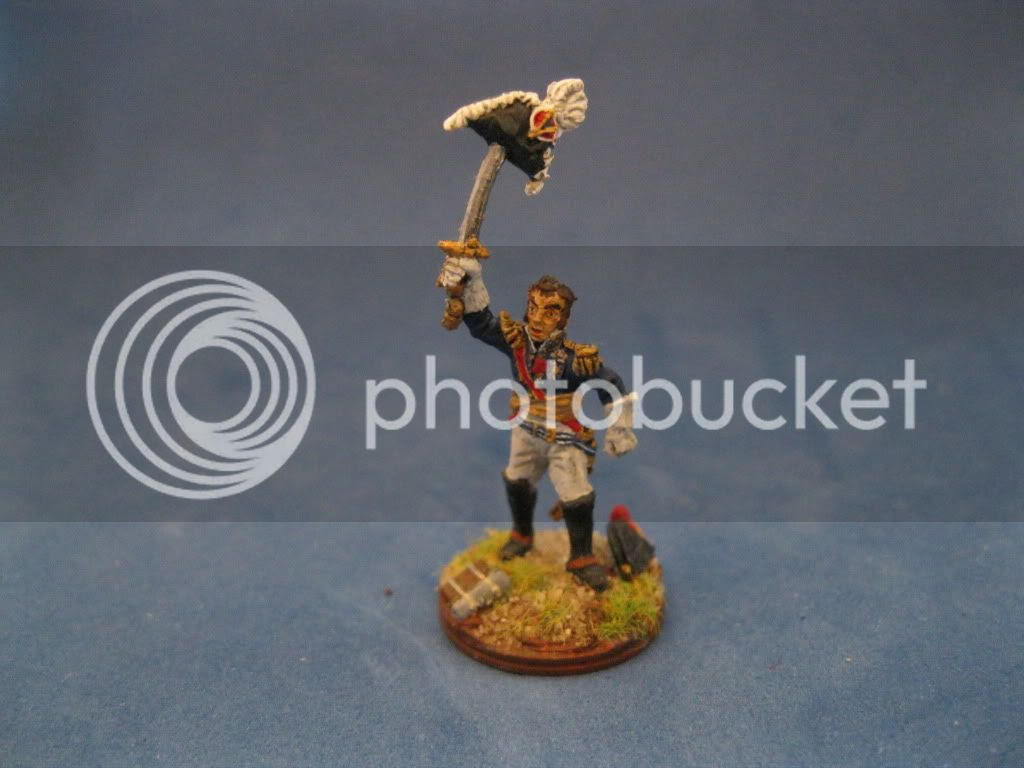 The next officer looked like an officer of Chevauxleger to me first, although Strelets had declared him to be an unspecified general. I have recently been told that it's an ADC. Well - I've painted it as an officer of the chasseurs a cheval of the Guadeloupe national guard for a 'painting duel' with Wikingpaintworks on Bennos' forum. 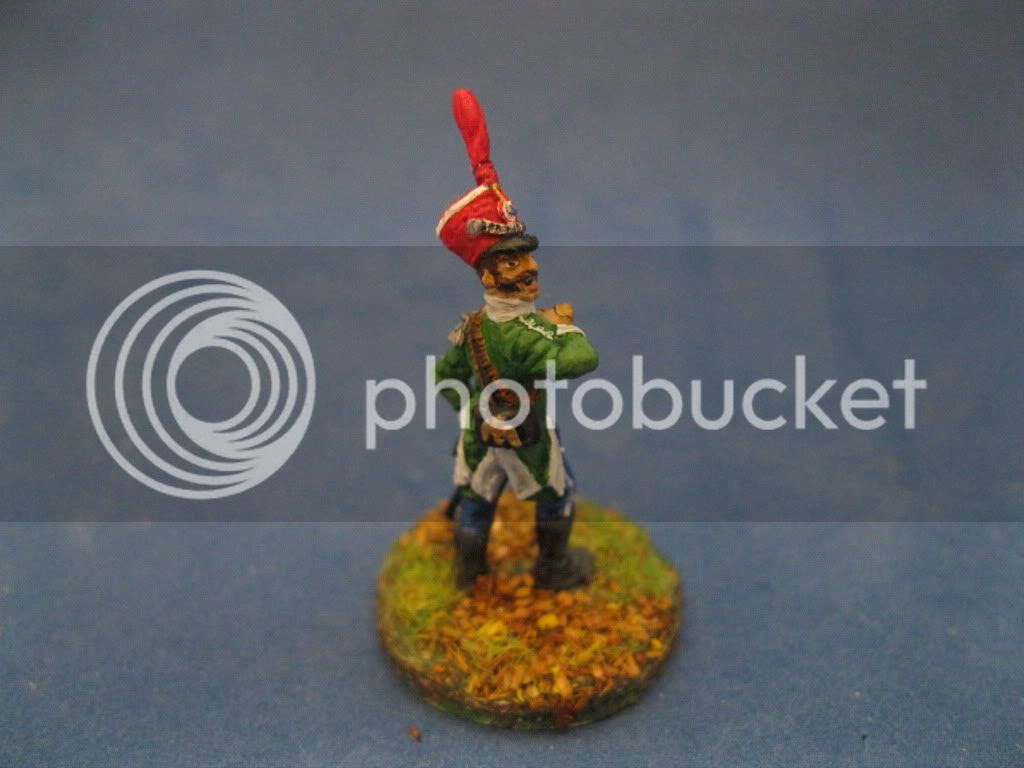 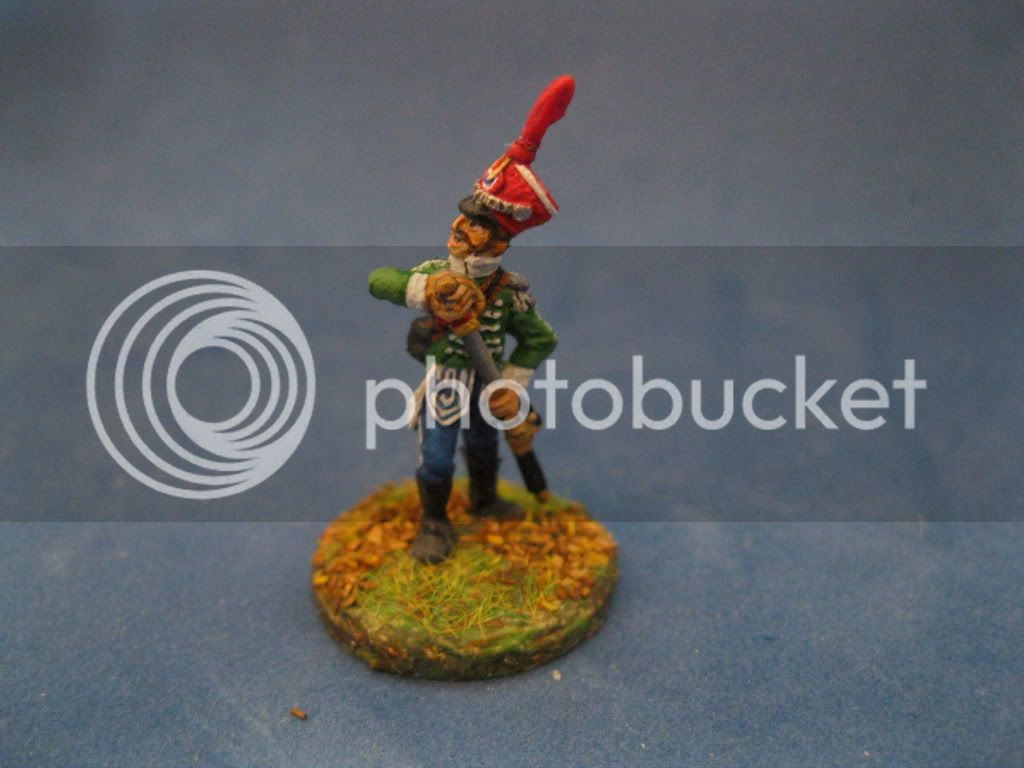 The last work of mine from this set, which I made as a gift for my father, was this marshal (supposed to be Massena, but I had a wrong look at the list) with an ADC: 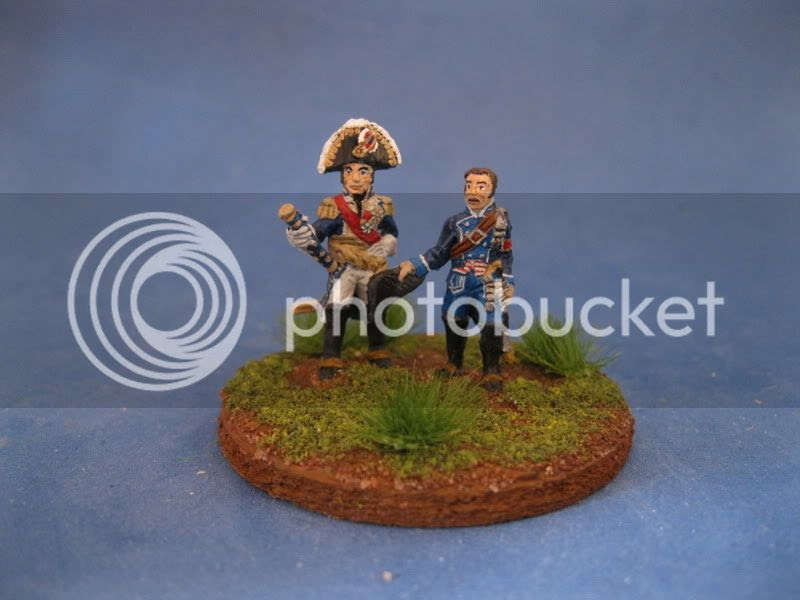 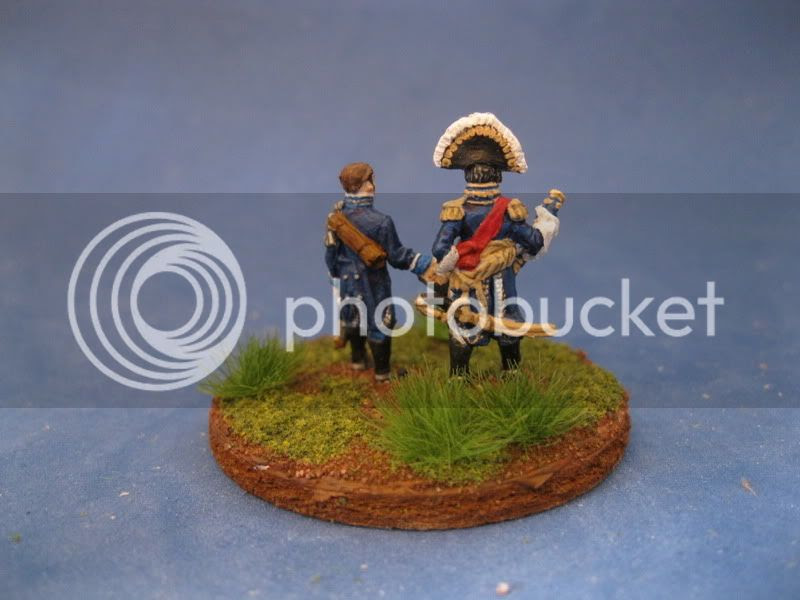 Hope you like them as much as I do! 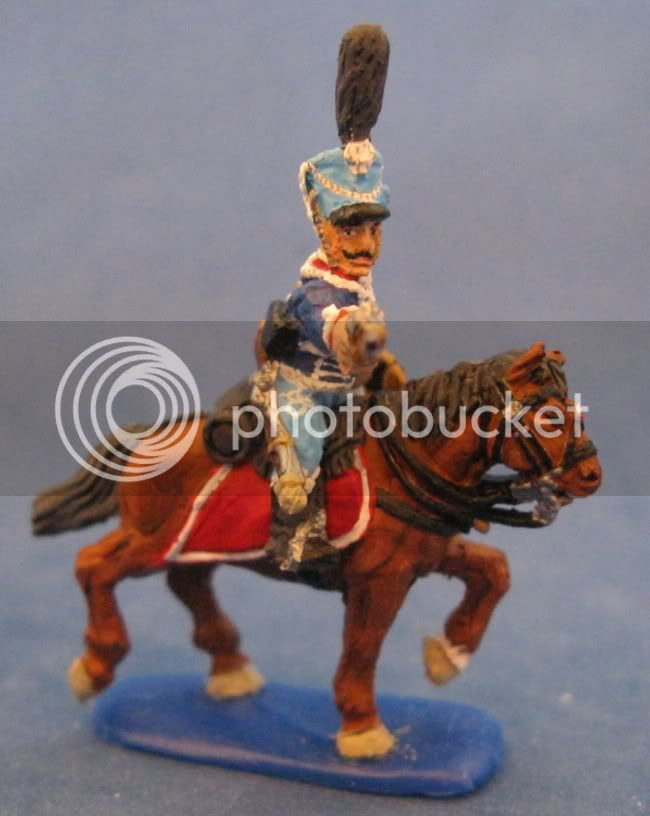 Bam! Especially for my guestes from Poland: a hussar from the 13th (Duchy of Warsaw) hussar regiment.
See other pictures of it in my hussars' thread: http://zedsnappies.blogspot.com/2011/07/now-its-also-hussars.html
There you will also find a picture of the next finished HaT 1806 hussar, this time painted in the colours of the Bla hussars from Sweden (no, it's not 'blablabla', it's really the name of the regiment, note http://www.kronoskaf.com/syw/index.php?title=Bla_Hussars). I currently have 5 unpainted figures from that set left, so I'll have another few interesting uniform patterns to show. But as I earlier said, I'm not very glad about the poorly detailed, slender little figures and their stompy horses, so it's finally only a showcase setup of some hussars, but nothing to invest more time and energy into. I'm not going to buy another box of these figures.

What's on the workbench today?

I'm still here and I'm still painting. Except from doing other things as well (much of them are part of normal-day-family-insanity), I still work on my figures but I must confess that I currently have a lot of unfinished things on my desk and can't concentrate on any of them for more than an hour before my eyes switch to the next one...

So apart from a setup of infantry figures for my long-time HaT project (this figures will represent infantry of the grand-duchy of Wurzburg), I have some new hussars on my workbench: 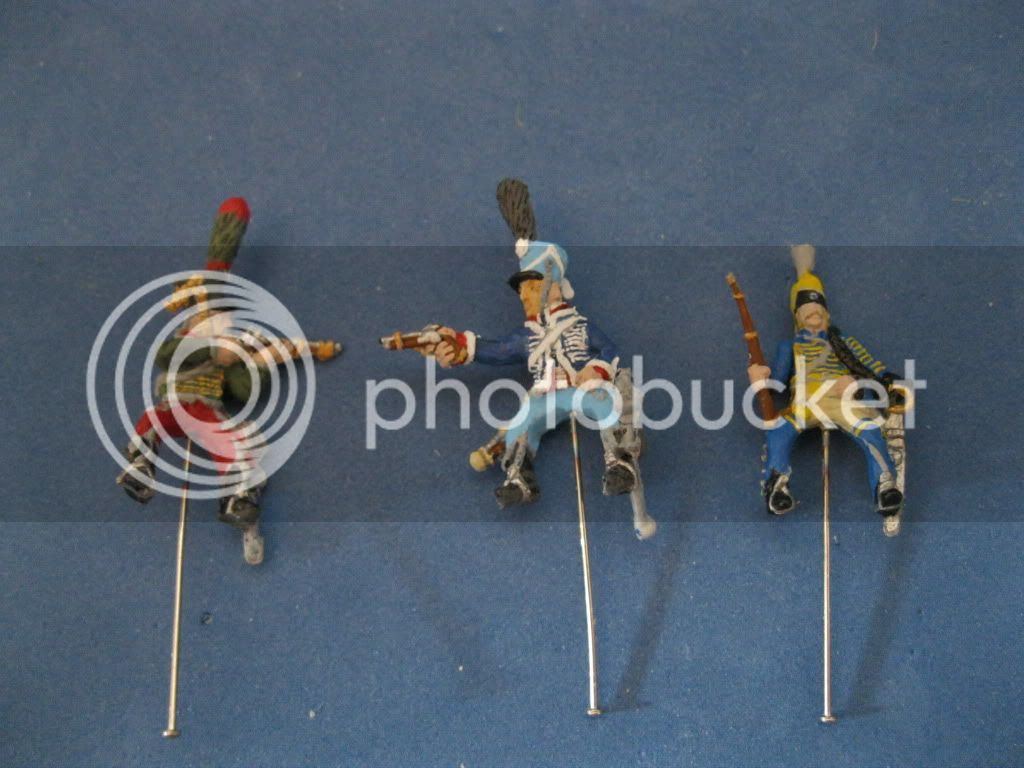 They are still in an early stage of painting, I know. But I can already see the results in front of my inner eyes...
The left one is a hussar from the grand-duchy of Baden, the guy in the middle is a Polish hussar. Both are from Strelets' French hussar set, richly detailed, though a little bit dwarfy and great to paint.

The man on the right side is another example on how many different nations used the same hussar uniform shape in the years between 1740 and 1806. This time, it's a swedish hussar - and there was not a single thing to be modified on the figure. I have another one of these hussars, which I took from HaTs' set of 1806 Prussian hussars, that has already been painted - but this will follow a little bit later. ;-)

So here it is - I proudly present the finished Isembourg regiment army band!
The more I look at it, the more I like it. And it was worth all the work, especially on the converted tambour major. I hope you enjoy it: