Well - once again, it's time to move my long-run project (http://zedsnappies.blogspot.de/2011/07/project-all-varieties-of-pre-1812.html) a little further. Here are the new entries in my catalogue of units that can be created by using HaTs' set of French line infantry no. 8095.

The first one is a soldier of the Baden regiment of life grenadier guards.
This guy required a lot of cutting and re-shaping work, including the use of heated cutters, etc. I'm not completely satisfied with the outcome, but the next one will be better. 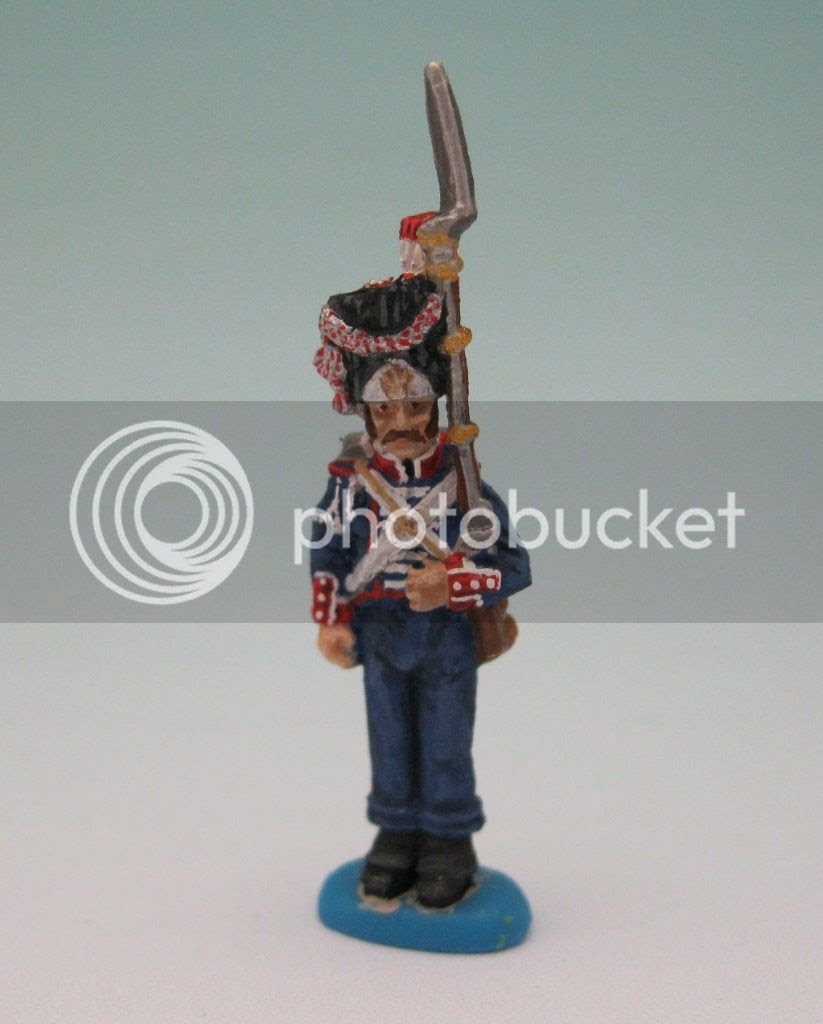 Nevertheless, it's a really nice uniform pattern. And easy to paint - if it wasn't for all the little details.
In comparizon, the next two guys were a lot easier. Blue again, it's soldiers from the regiment Ile de Ré and Walcheren. 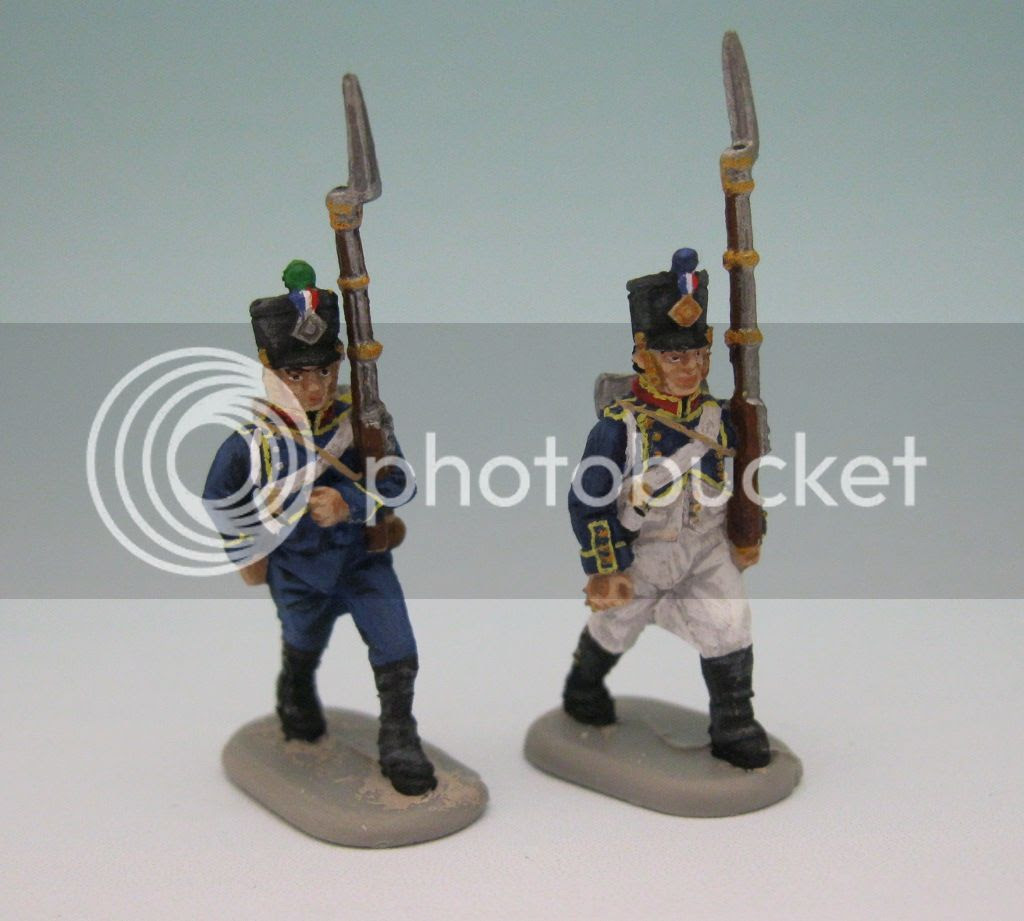 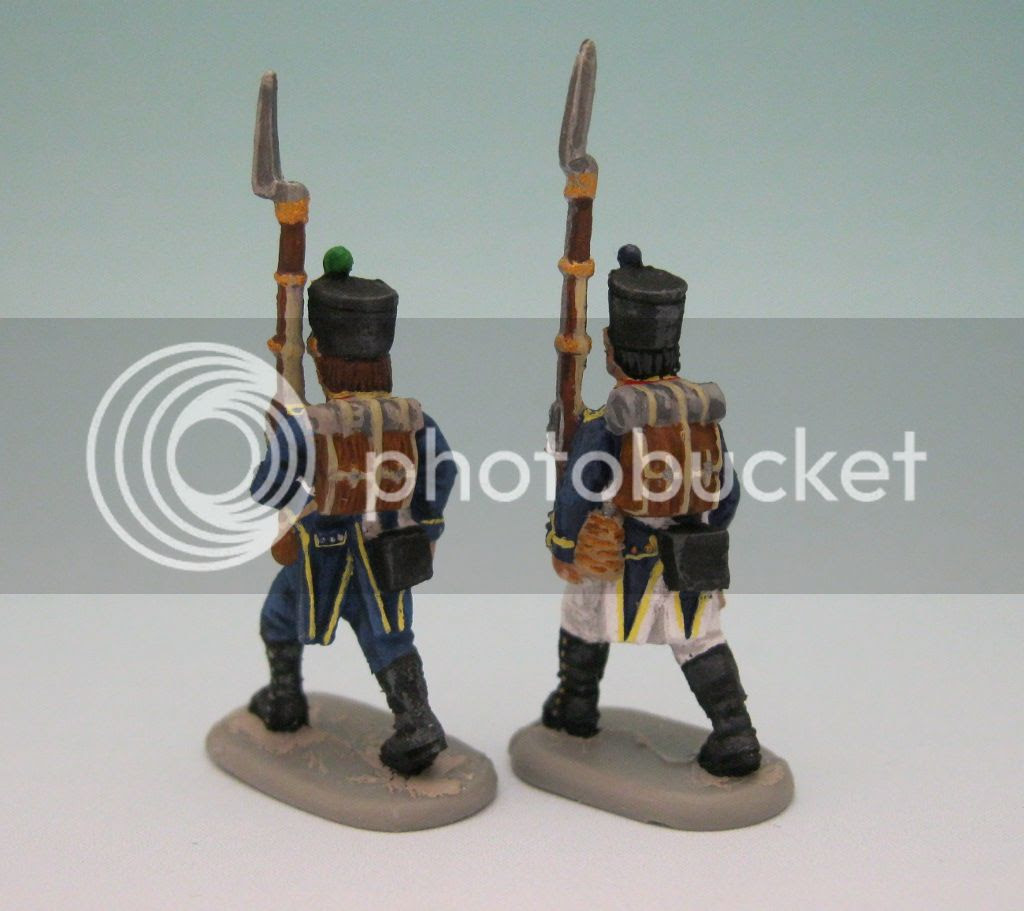 Nice and quick to paint. I still argue about that guy on the left side (Ile de Ré rgt.) - that pose looks somewhat weird. The next unit to come should be some Swiss guys, but at first, I'll have to paint something Polish, eh?

Today, it's time to cheer up again for another country with more then 100 visitors on this page.
Many thanks go to Belgium this time!

And what is more easy then painting some good old Belgian line infantry? 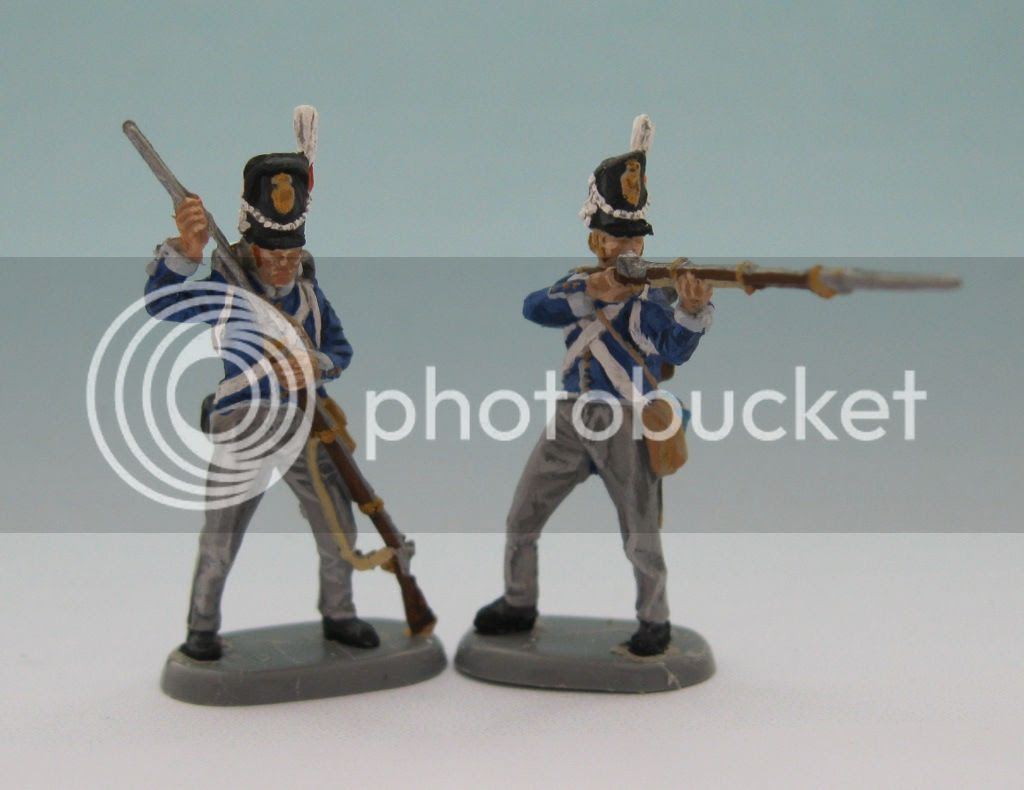 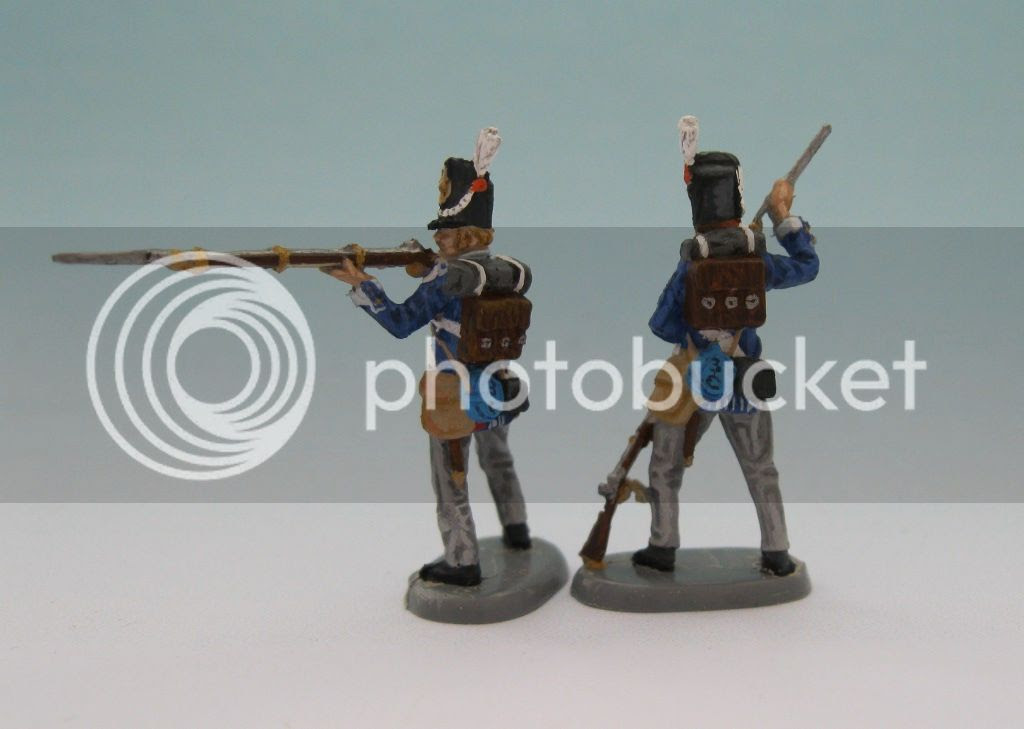 Here it is! Thanks to Peter from http://peterscave.blogspot.de/, who sent me these little HaT fellows.
Sort of a quickpaint job, but almost the best I was able to do without spending weeks for these figures.
Nevertheless, I like that set. The figures are nicely modelled - only the extra plastic and some naughty mouldlines are doing bad for some of the poses.

So thanks again for visiting this place!

And the next big 'thank you' goes to:

Thanks for your interest in my little work!
I know that many great miniature artists come from Russia, including some really great sculptors. Keep up the good work, folks! Well - this is for you. From Zvezdas great set of Russian hussars: 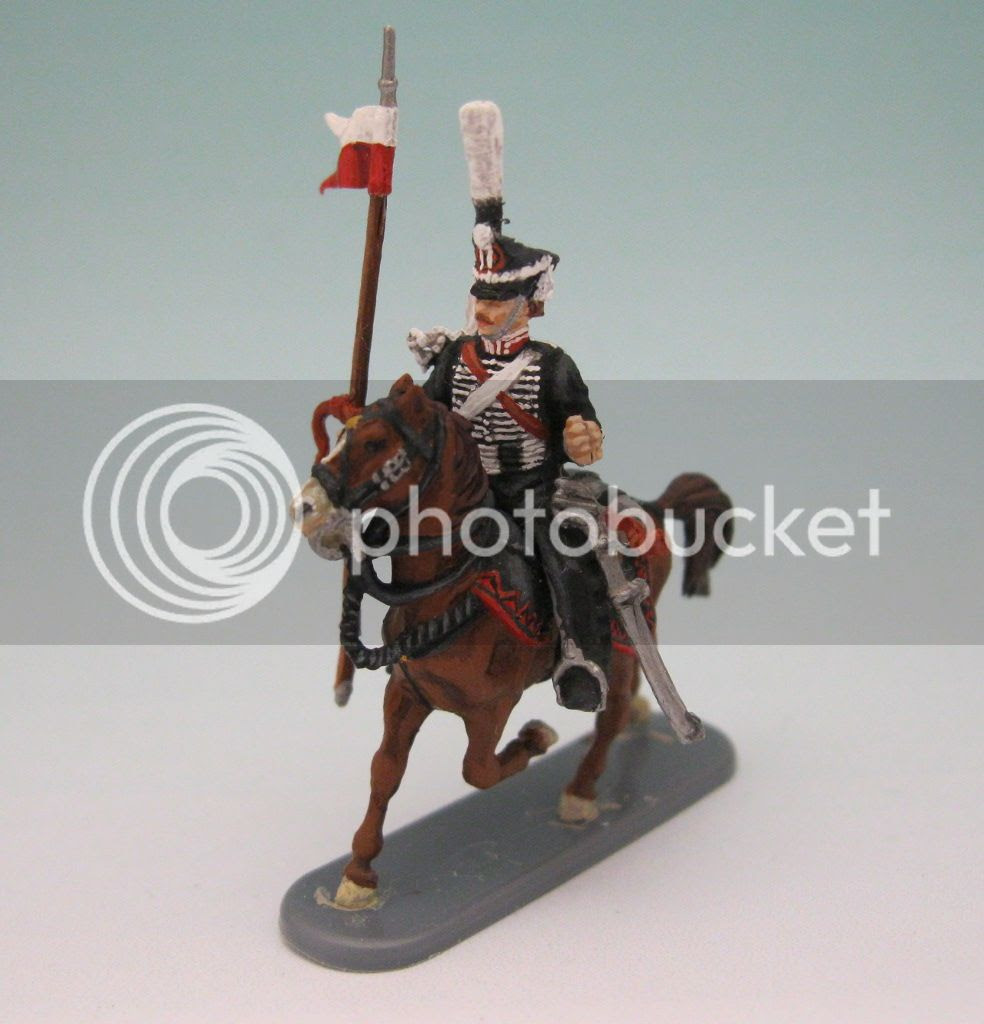 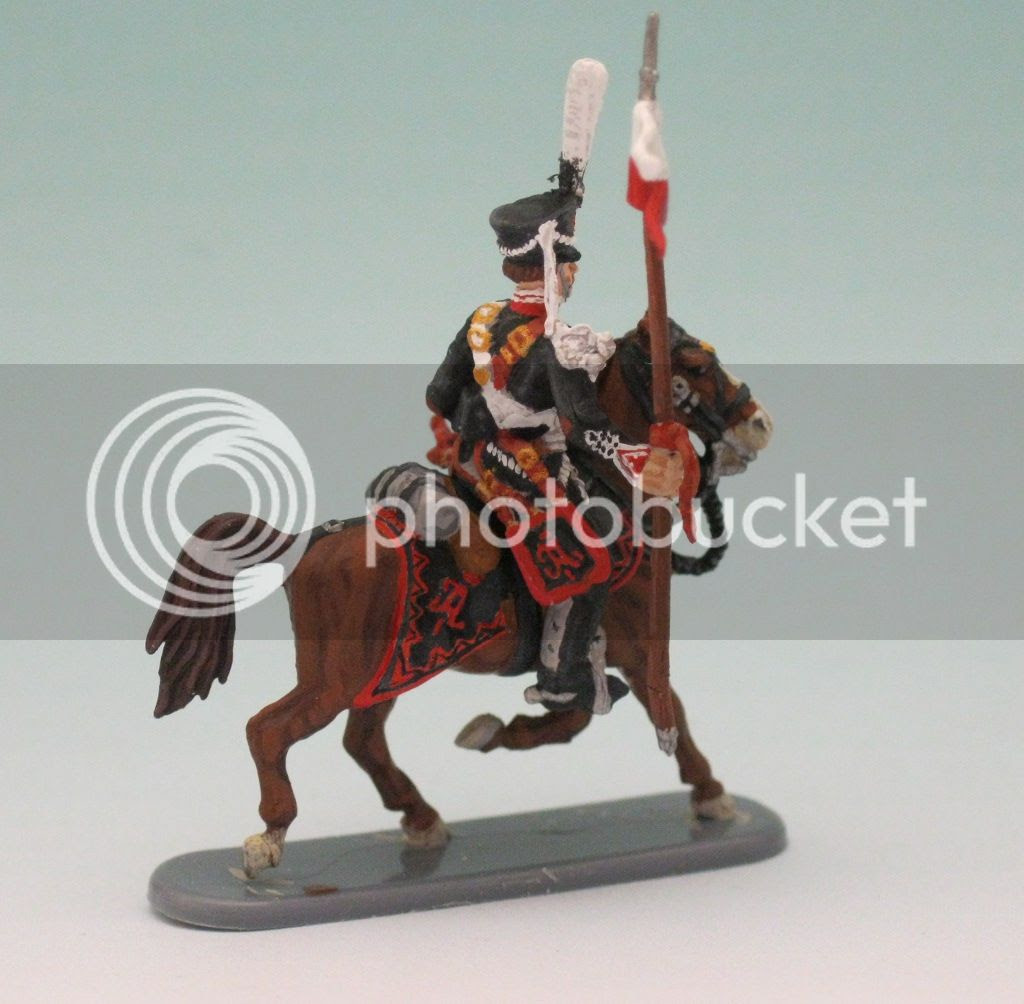 A trooper of the Alexandria hussar regiment in his splendid black uniform. I must confess that among all Russian hussar uniforms of that time, I like the black ones the most.

I suppose that one day I shall put a greater focus on Russian troops of the Napoleonic wars. Seems as if there's much to discover there. :-D

Happy thanks to the Dutch / drawing plans for 2013

Okay, you dutchie Oranjes!
You belong to the Top-10 of the visitors on this blog and so you have deserved to get your '100+' figure!

And here it is: 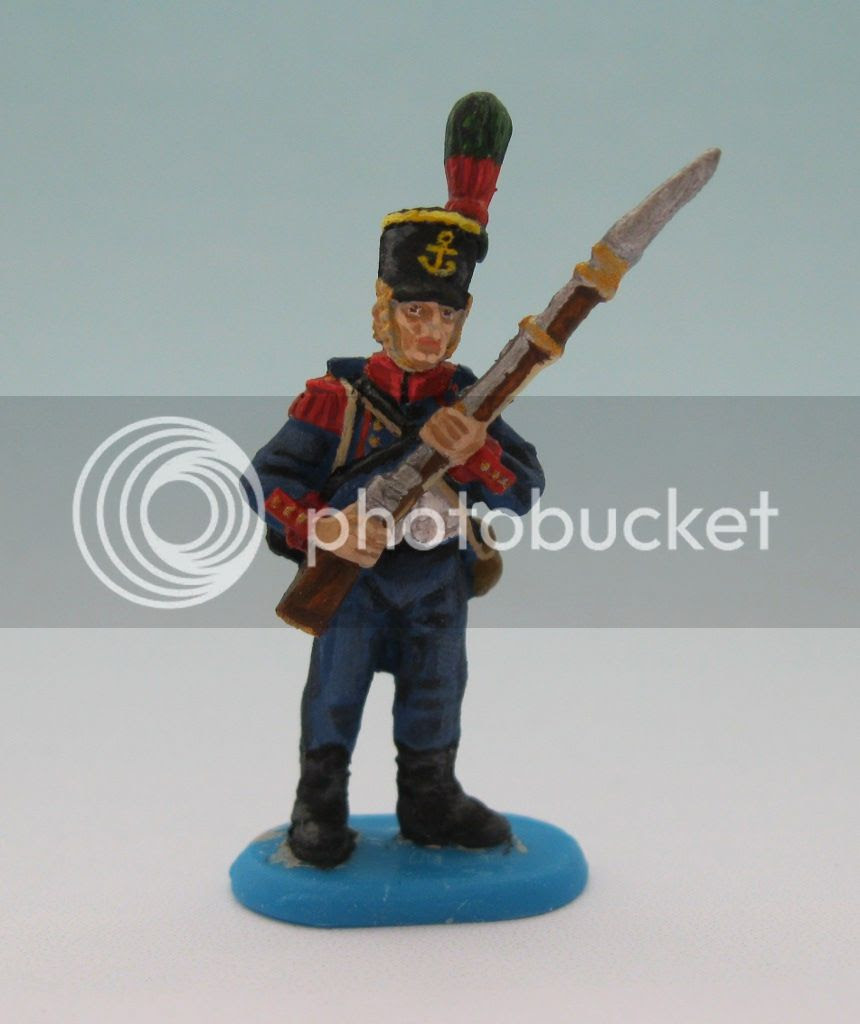 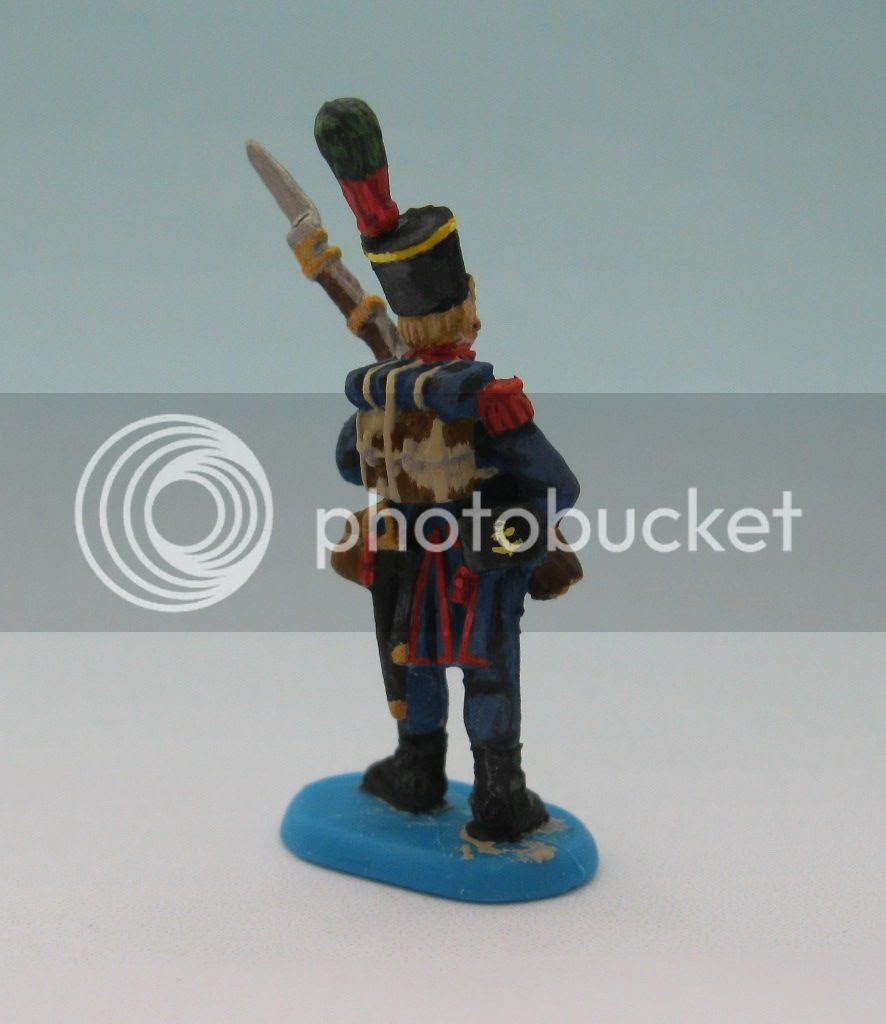 Hehehehehe, I guess some people would have expected some Waterlooey figure, right?
No, it is not. This is a Marine of the Kingdom of Holland which I found in a collection of old Suhr pictures - and a simple and quick conversion of a French line infantry figure from HaT.

So thanks to the Dutch - if there hadn't been that Dutch guy who founded http://bennosfiguresforum.com/, I would certainly not be in that kind of hobby. At least not in that intensity. :-D

Which brings me to the next thing: plannings.
Everybody seems to be fond of analysing last years' performance an drawing plans for 2013 these days. At least I have read such things on several blogs now. Well... what about me...?
Reading such things, I reflected my own work of 2012:

I have completed 81 foot soldiers, 18 mounted figures.  25 foot figures and 18 mounted figures are in different stages of preparation. Not very impressive, when I compare that with the output of people like Paul (http://paulsbods.blogspot.de/) or Tamsin (http://wargaminggirl.blogspot.de/). But I'm fine with that . Although I sometimes wish to be a faster painter in order to finish my projects sooner as I currently can, I have learned that what counts most is to be happy with the results - and I am.

Well - the figure above will add to my long-run project 'pre-Bardin uniform variations' (http://zedsnappies.blogspot.de/2011/07/project-all-varieties-of-pre-1812.html). Looking at these Suhr pictures, I discovered that the Kingdom of Holland had a number of additional versions of the original pre-Bardin uniform version I had not known before. So I made an Excel sheet and studied all my reference material in order to find out how many figures I have already painted and how many are still to be painted for completing the whole task.
The answer is somewhat disturbing. I have currently 281 versions in my list of which I have painted 75. This leaves me with 218 figures to be painted. Ugh.

And what does that mean for my plans? At first, I decided to make at least  two single figure vignettes for FIGZ and the ISSC in Heiden this year. I'm also working on a special display for the multi-figure contest in Heiden. Apart from that, I want to finish the groundwork for my little Spaniards' vignette and add some figures to my long-run-project-regiments list.
This includes finishing at least:
- all not yet painted Swiss regiments (3 are left, of which I have one on 75%)
- soldiers for the regiments Isle de Ré and Walcheren (currently at 50%)
- Baden foot guards (one at 90%)
- Wurzburg light infantry and regimental artillery
- 1st provisional Croatian infantry
- King Joseph Napleons' Spanish guard grenadiers
- Italian light infantry

So far so good. Let's get ready to rumbleeeeeeeee !!!

Oh - and Happy New Year to you all!