Hi folks, here I am again!

As I'm currently working on some gardes d'honneur, I like to show you something rather unusual in the 1/72 plastic business - that means at least here in Germany where I live. When we Euros here '1812', most of us think about Napoleons invasion in Russia, that bloody campaign that cost hundreds of thousands European soldiers their lives. Probably we also think about the Pensinsular war in Spain. What most of us don't even consider is that far in the West, there was also a war going on - the 'war of 1812'.

For figure painters and wargamers, this scenario has one big advantage: you need only British figures. US-American and British-Canadian uniforms were in most cases (except some militia units and some unique regiments like the Canadian Voltigeurs) nearly the same. Which is especially the case in a small scale like 1/72 where you wouldn't be able to recognize the differences anyway.

So - I bought me a box of Strelets marching British infantry. It did me a favour especially because it has a flagbearer with a banner flying brightly in the sky - great for painting it whatever you like. After looking at the uniform posters, I decided to go and paint these figures with the uniform colours of the 16th US line infantry regiment. Hope you enjoy the pictures. 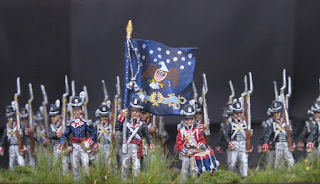 For many of the early war US units, the old stove-pipe-shako would be the choice of  the day. So have a look onto the uniform posters to find out which unit wore which sort of shako at which time. In addition, some regiments changed jacket colours during the war - for example starting with a brown jacket early in the campaign, later switching to a grey one. For this unit, the Belgian shako fits just fine. 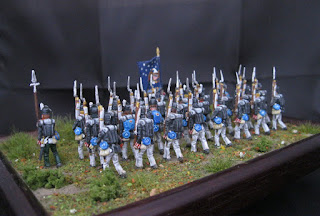 The backside of the troop. In the middle, you can see troopers wearing the blue coated backpack. I wonder if there was a consistent regulation on that matter, because on the basis of looking to uniform plates, paintings and reenactor pictures, I couldn't find out which units wore the black backpack, the covered one, even several sorts of backpacks seemed to have been used, some with coat on top of them, sometimes slung around, sometimes I saw no coat at all... pretty confusing. 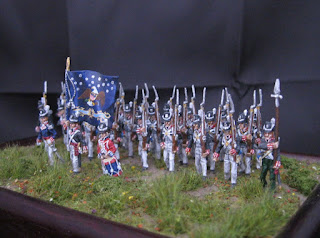 The Strelets figures do a real good job, I like them a lot. The only thing about them are the muskets - they're still a wee bit too thick to look fine. 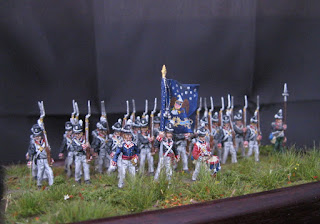 By the way - I found several examples that officers wore blue uniforms while the ensigns and the troopers wore the distinctive colours of the regiment. 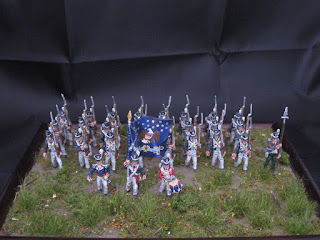 I still have a couple of British infantry figures on my desk - which means that I will show you a couple of colour variations in a future blogpost. For sure.

See you next time!